Despite flirting with girls and only girls, Kaminari has more popular gay ships than straight ships

I honestly don’t. For me it’s Kamijirou

KamiJiro is the best ship

I would like to disagree with that theory that he "only flirts with girls". Those who have read the manga know what i'm talking about. During the sports festival, Kaminari can be pretty obviously be seen flirting with Shinso.

Shinso teamed up with Denki during the first round of the Joint Training Battle. Despite his distant and cold attitude, Denki tries to strengthen ties with him, even defends him when Katsuki describes him like a dead weight for the exercise due to his lack of experience. After the initial clash with the 1-B team, Hitoshi is well aware that his inexperience in battle and apologizes for his slowness in capturing Jurota Shishida, but Denki points out that what he was able to stop Jurota, avoiding the total defeat of 1-A team, and tells Hitoshi that he likes him and he's rooting for him to become a great hero some day. Denki compliments Hitoshi a lot during this time. In one panel, Denki says to Hitoshi, “You have the face of a popular guy. You’re popular with the ladies, yeah? Trust me, I can tell.” Implying that Denki thinks Hitoshi is cute.

I'm really sad about this. It's a really awesome ship with tons of wasted potential. But is underrated due to the lack of manga readers. 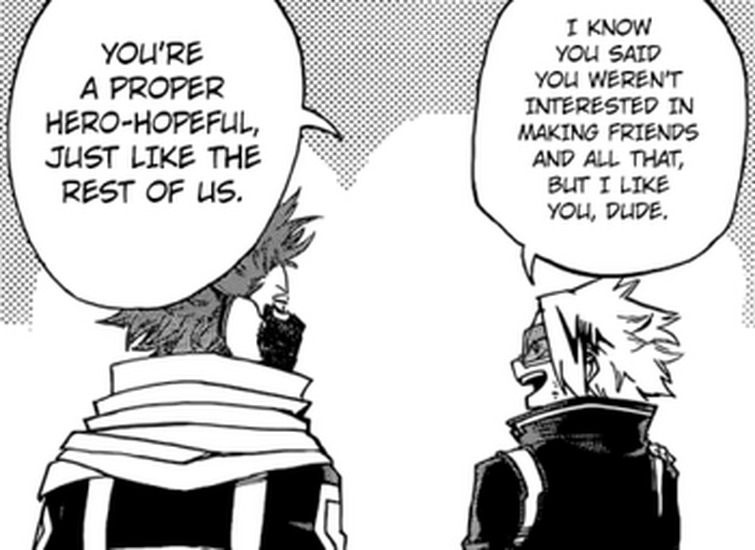