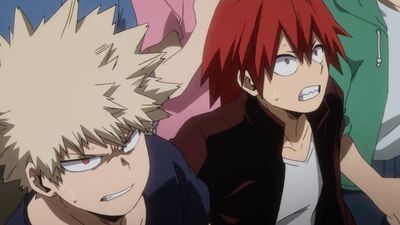 KiriBaku is the slash ship between Katsuki Bakugou and Eijiro Kirishima from the My Hero Academia fandom. In Kirishima’s chapter from the vol. 4 light novel, he talks about Bakugou to Fat Gum, musing how he has calmed down ever since his fight with Deku, and he smiles brightly while talking... 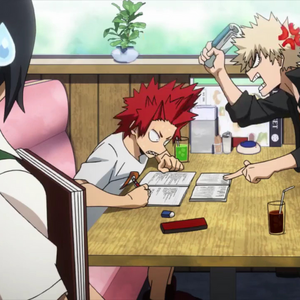 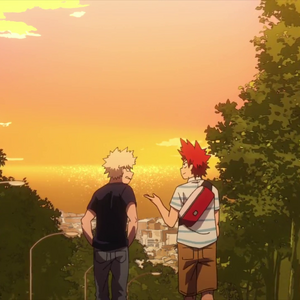 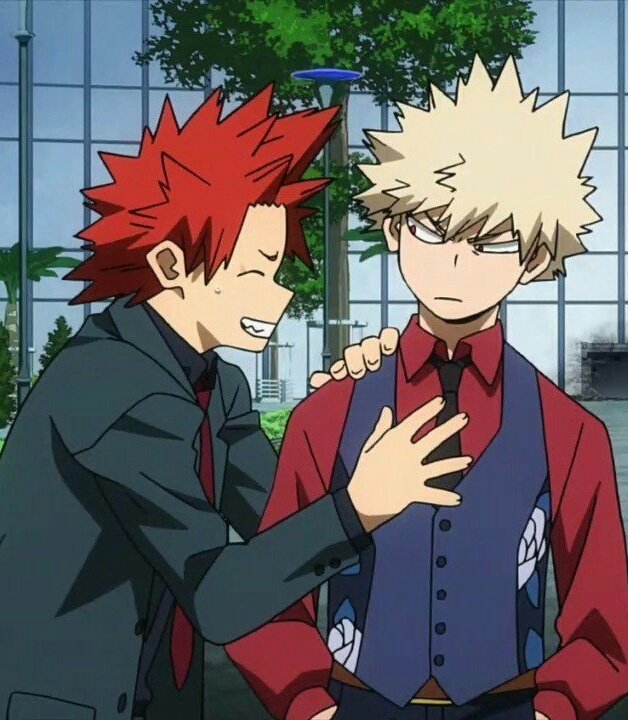 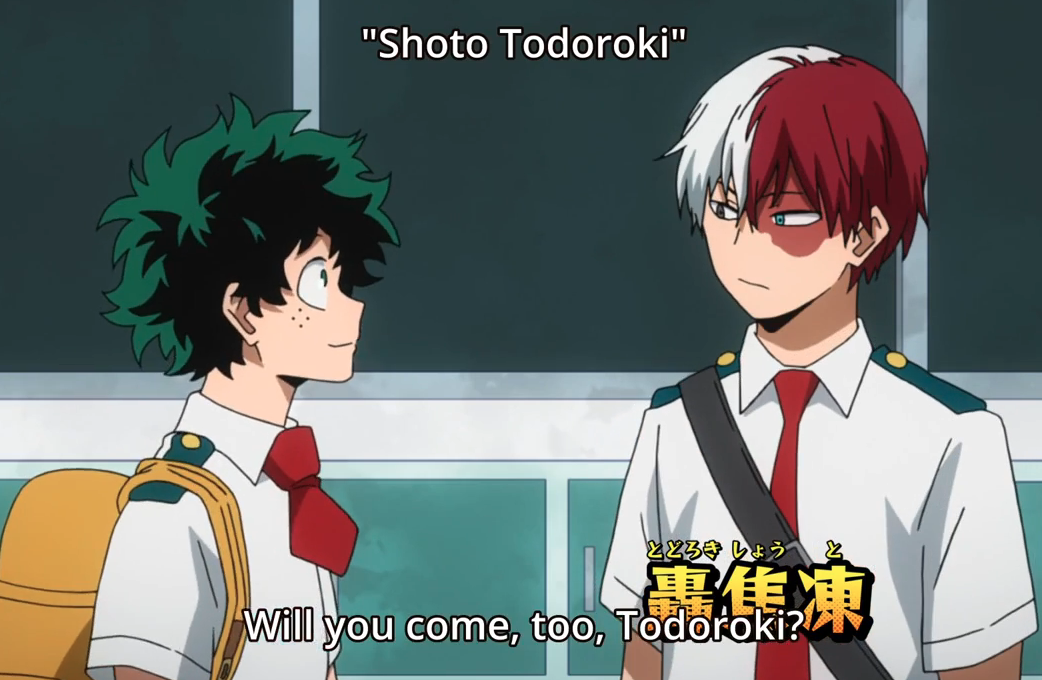 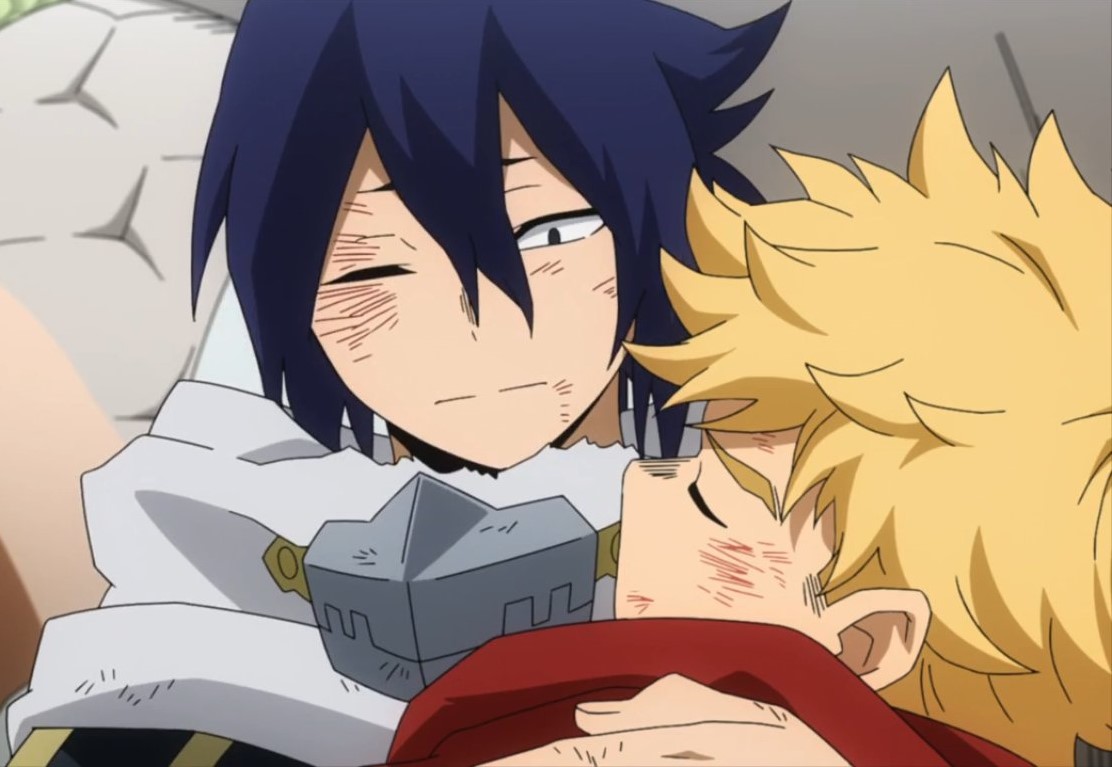 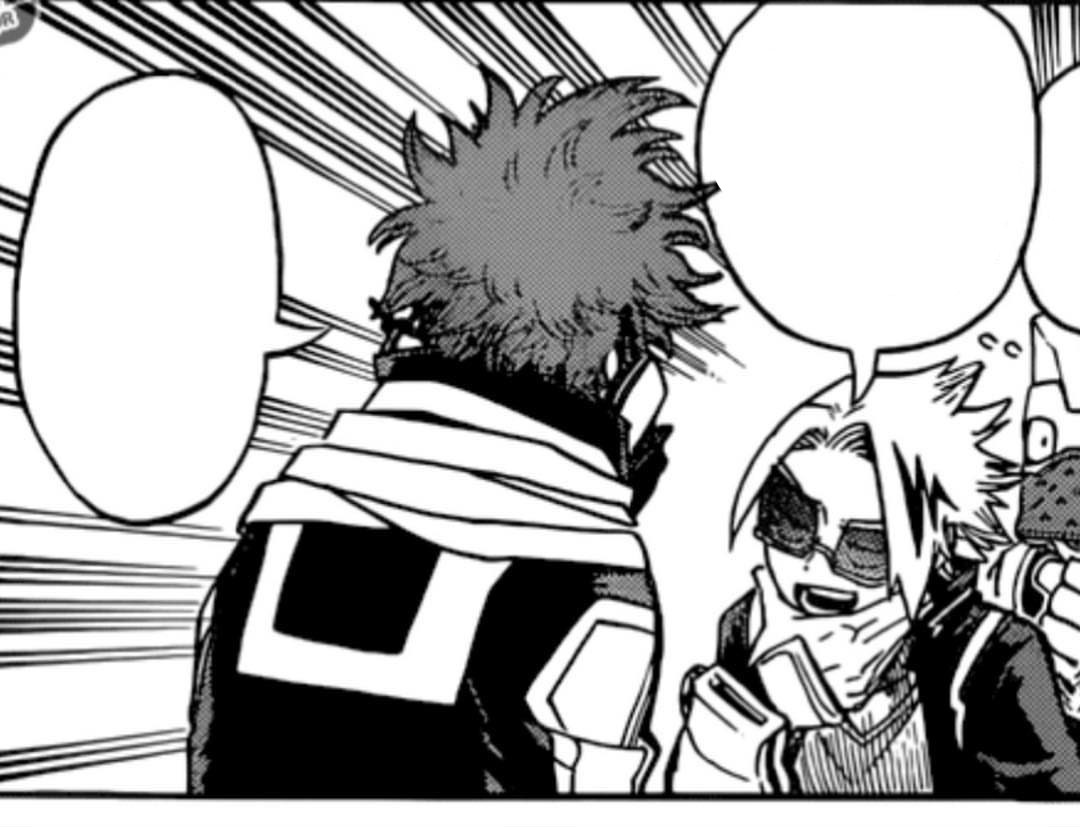 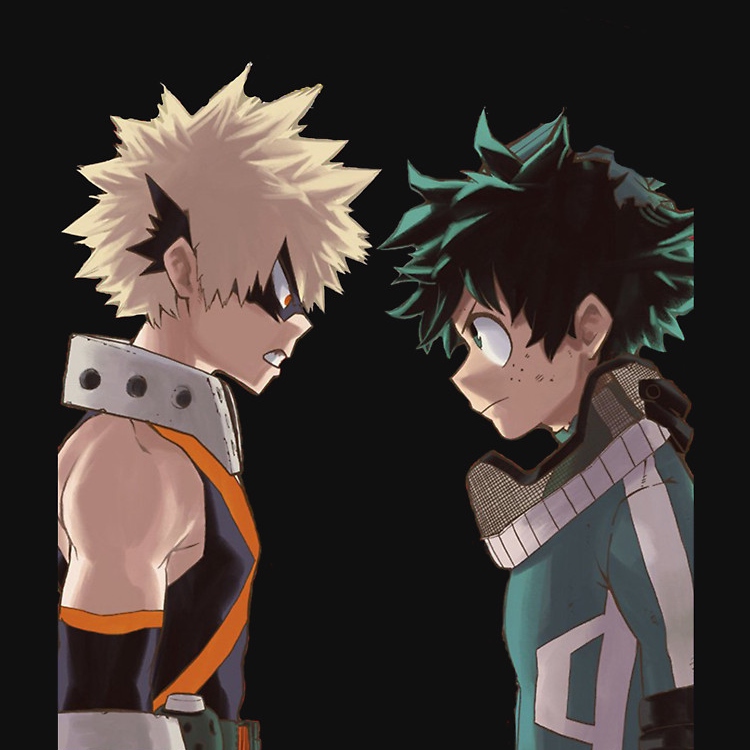 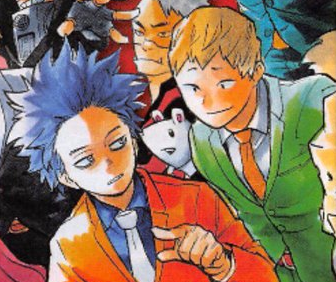 I made a discussion about it but nobody’s actually commented on it at the moment so here’s mine..

Dabi x Hawks (Didn’t know where to place it)

KIRIBAKU ALL THE WAY MAH BOIS

You can tell who a person is by who they ship, if I shipped Tsuyu and Mineta I would be an idiot ¯\_(ツ)_/¯ Go find my other post where I asked what your guy’s ships were! 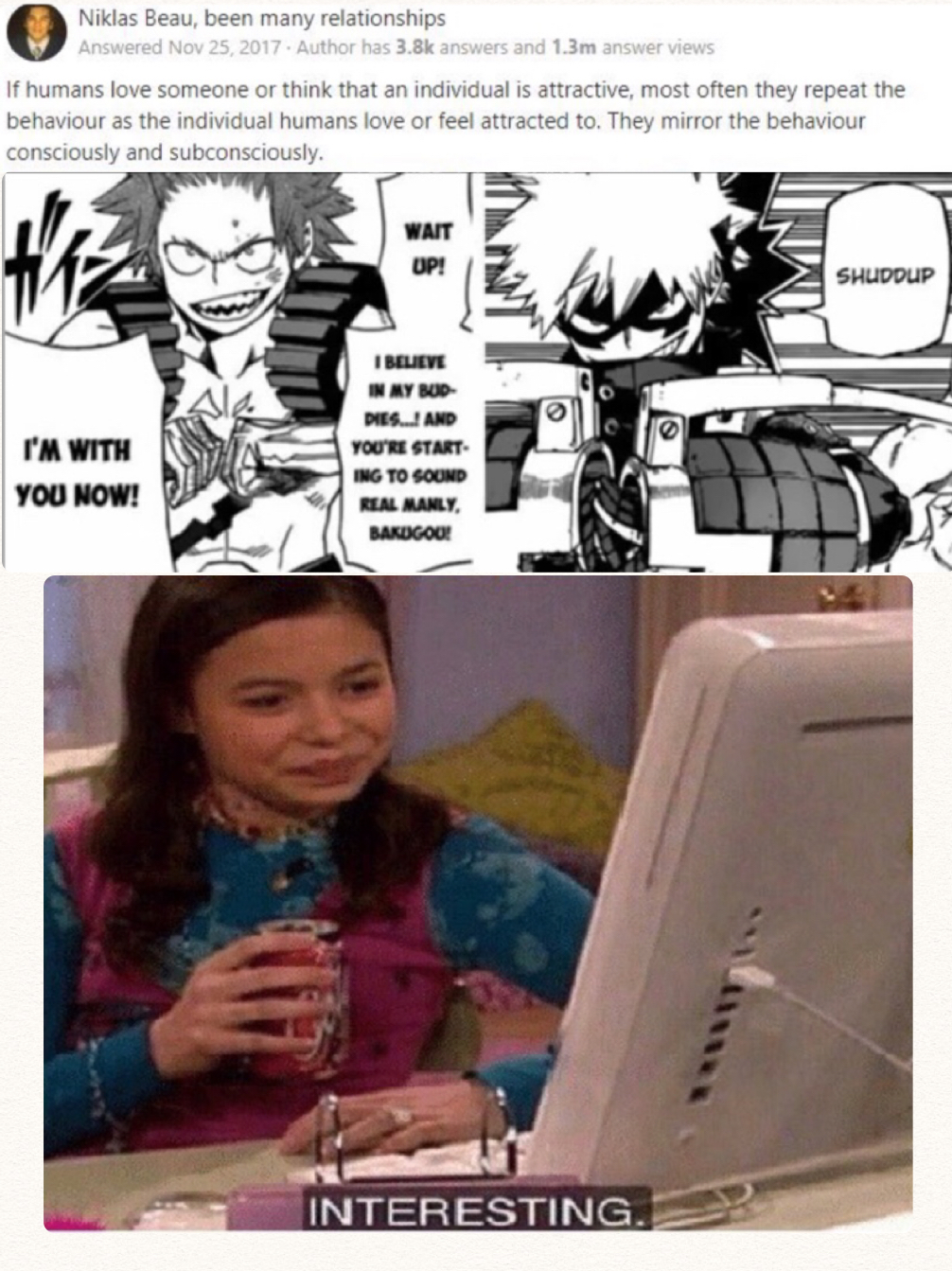 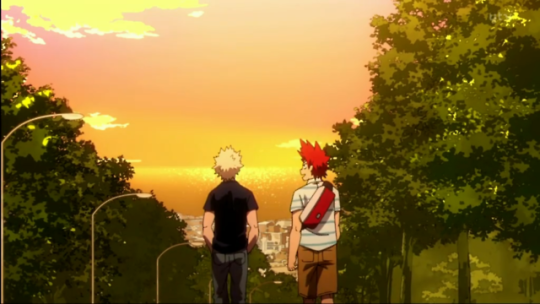 So remember this scene... yeah I was just thinking about Kirishima’s bag and how it was probably holding his swimsuit and stuff... but then I remember Bakugou doesn’t seem to be carrying a bag or his swimsuit... where is his swimsuit? I would like to think that it’s in kirishima's bag... thoughts?

Today we have our exploding boyo, Katsuki Bakugou!

Ight boys. Yes. It's not toxic, Bakugou is growing to be better. Favorite.

*clapping* Good ship. Good ship.(these are getting lazier by the second)

I already gave my opinions in the last one(Momo).

I didn't know this existed, but, I have to say it's cute. After the festival it got a little attention. Not my favorites, but cute.

Bakugou x Any of his old friends;

This is bad. Bakugou only used them, you can tell. 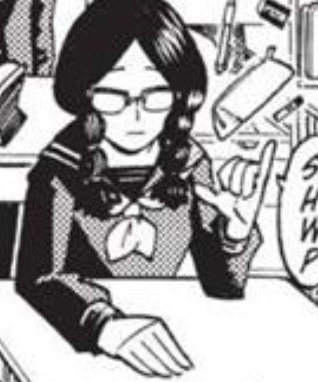 It's a good ship, ngl. She sat in front of Bakugou, so there is panels of them together. Right after BakuDeku for me(someone draw them PLEASE)

Ok. If you want me to add something I will.

(edited by Pass the yuri)
My Hero AcademiaShippingKiriBakuBakuDeku
OTP
They'd be cute together
Dont mind the ship
Nope. Hate it
*insert other ship* is better! 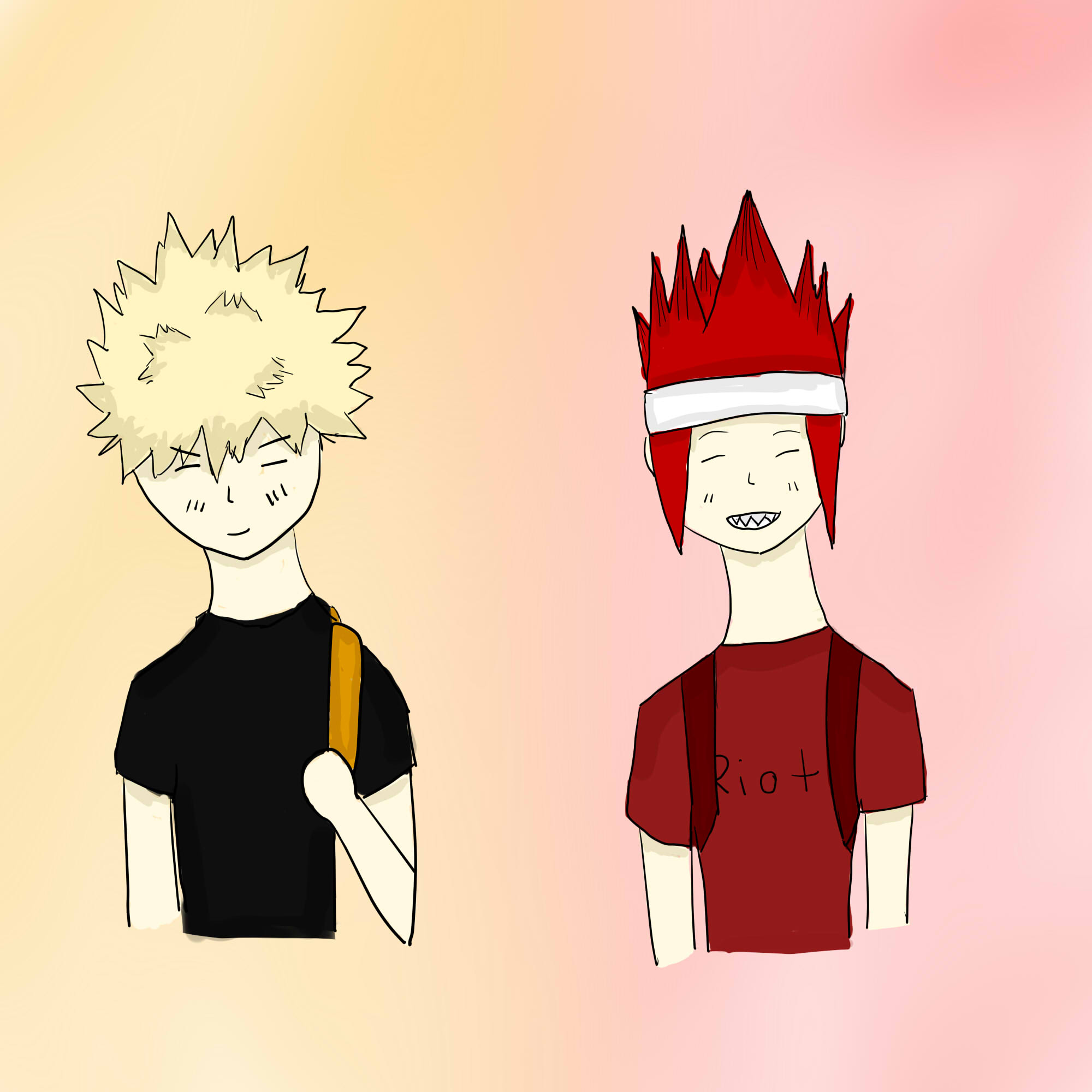 Why is it always kirishima who has to

Or get turned into a cat

Dont question the last one

[I have researched into this so we can get a broader understanding of these bois this is my 1st Dynamics Discussion so tis a lil messy **agressive apology **, also if you don’t ship them that’s 100% fine, feel free to correct me on anything and lemme know your thoughts, but most importantly enjoy!] 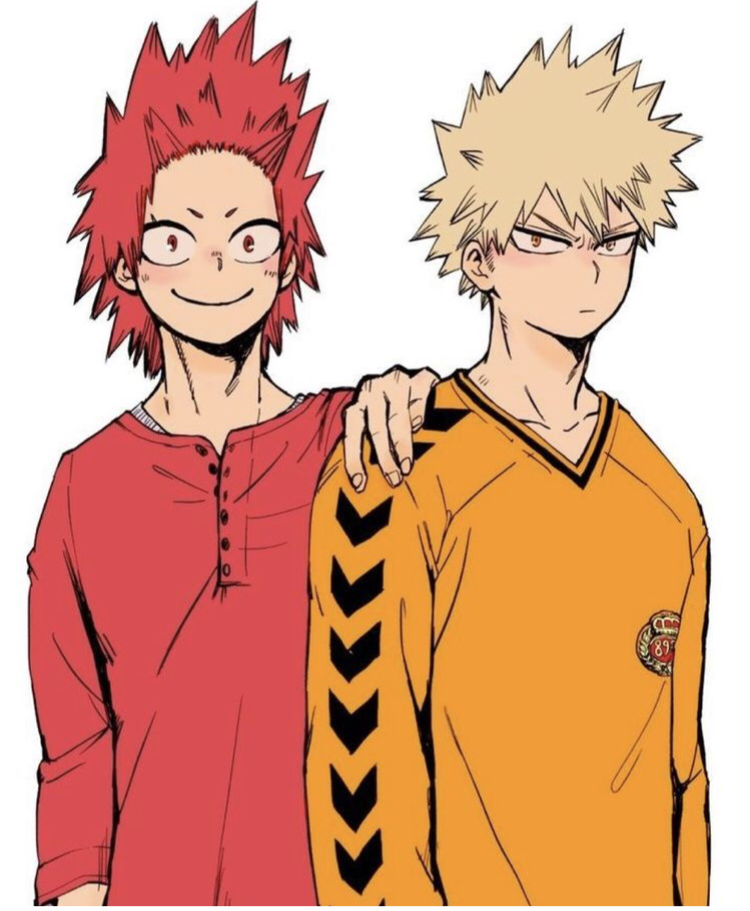 • Attitude/behaviour towards each other.

•Romantic implications and thoughts on them. (Unbiased)

So instead of rambling about ALL the little things, we want to discuss the most significant aspects of their relationship. I think it’s very evident that the pair have a strong sense of respect for one another. For Bakugou, it’s his ability to see Kirishima as his equal [I know this is discussed often but it’s important especially when we look at Bakugous character] despite having a superiority complex, and for Kirishima it’s his consistent admiration for the guy, regardless of Bakugous attitude. In the light novels in Vol.4 kiri even talks about Bakugou to Fat Gum explaining how much calmer Bakugou had become after his fight with Deku, implying they either do discuss sensitive topics like Bakugous mental health or Kiri is very perceptive. Interestingly Kiri seems to be able to ‘tame’ Bakubros behaviour towards others, for instance, whenever Bakugou seems to lash out at his classmates especially Deku, kiri is always the one to ‘hold him back’, if we look at other characters who try and challenge Bakugou/ridicule him e.g. Seiji (shiketsu student) Bakugou always responds in a threatening or demeaning way. However in Kirishimas’ case, he sees it as a form of inspiration, just look at Bakugous reaction to kiri during the Cavalry Battle (s2 Sports festival) kiri is indirectly ‘challenging’ Bakugous judgement of character by giving Bakugou the choice to accept him on the team. 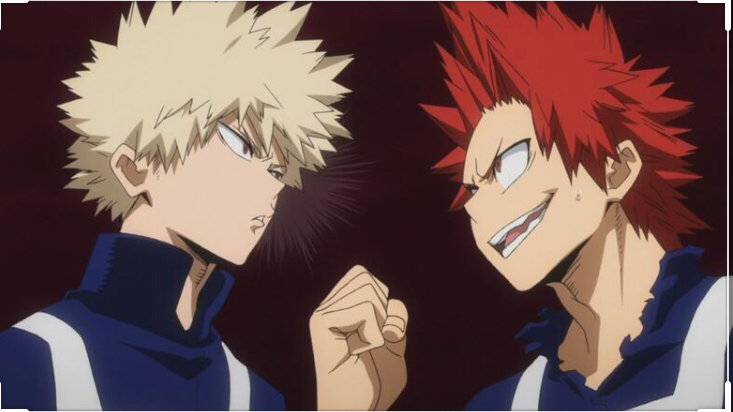 Interesting side point: Their quirks complement each other in terms of training. Bakugou can practice strengthening his attacks by using them on Kiri, this in return let’s Kirishima strengthen his durability against close range attacks. This oddly makes a great metaphor for their overall relationship in my opinion, they both need each other to reach their goals; Bakugou wants to be strong enough to beat Deku and Kirishima wants to become ‘unbreakable’.

Relationship Development: At the beginning of the series, Bakugou and Kirishimas relationship wasn’t as ‘sturdy’ as they are now, what I mean by this is that, Bakugou at this time was still in his ‘Everyone is better than me phase’ [Remember in s1 when he got insecure during the combat training] because of this he grew more short tempered, and whilst a lot of characters seemed put off by his attitude Kiri like I mentioned earlier noticed his ‘manliness’ in the sense that he noticed Bakugous ambition to be the best. However Bakugou didn’t reciprocate this type of behaviour right away, it’s not until s4 [maybe he did earlier but this one was the most obvious to me] that he encourages Kiri to live up to his promise, to become “a horse that never wavers!”. 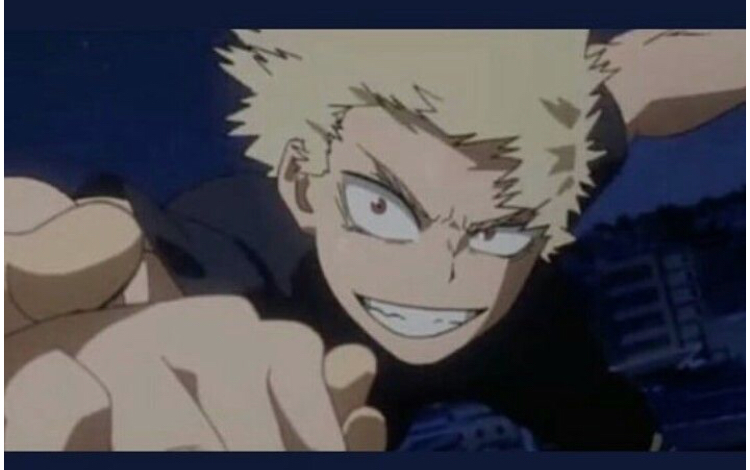 Another side note, I think the biggest catalyst for their growing relationship was the moment Bakugou was willing to grab onto Kirishimas hand when they were rescuing him - because it indicates that Kiri is able to help Bakubro WITHOUT hurting his pride. In the manga they are portrayed as much closer and attentive towards one another there’s so much material I could get into but we’ve got to move onto the next bit!!!

Aight! So to the more romantic side of things. First of all....there are SO MANY things that occur throughout the series including Anime/Manga/Smash/Light Novel that it’s hard to mention them all. So let’s just get to the more significant or interesting ones. 1) In MHA Smash! [its debated whether it’s canon or not but it does have to be approved by Horikoshi] Kirishima is portrayed to be crushing on Bakugou throughout the manga. They even unintentionally flirt. 2) Bakugou has actively tried to cheer Kirishima up, I mentioned earlier about Him reminding kiri about his promise and kind of encourages him to keep going, this is what ultimately inspires kiri into naming his ultimate move after Bakugou ‘Unbreakable’. Now I know a lot of antis would argue that, Shounen Anime tends to bait fujioshis into liking their content via queer baiting plus other stuff, which doesn’t make KiriBaku a valid or unlikely to be canon. Now pErsOnally, I doubt it’ll be canon mainly because shounen anime hasn’t really been the best at portraying LGBTQ relationships or atleast haven’t fully accepted the idea (idk to be completely honest) however my main point is that, Horikoshi has introduced transgender characters [Magne/Tiger] and bisexual characters [Toga, Meta Liberation Arc, where she mentions she loves Uraraka as she consumed her blood etc] so it’s not impossible to have a gay character it’s just unlikely, someone pointed out in a post that Hori could pull a JK Rowling and confirm it after the series - I thought I’d mention it cause it’s kinda funny idk why 😂.

•There are so many things between them that don’t have a heterosexual explanation 😂 but yeah I’ll have to get to that another time.

•Personally I Ship based on meaningful interactions *cough* tho I’m a multi shipper *cough* and this pair even if they aren’t gay have shown to challenge male relationship stereotypes. IMO

Okay so thanks for reading, I understand if this discussion comes of as rushed and vague because I kinda struggled to fully convey how I feel about them and how the Fandom generally feel (idk comment how you think I did 😂) plus *Tired noises* Anyway hope this was interesting,

Todomomo - wrap me in plastic

Okay... i've kinda been getting back into my hero and now I dont know what I ship bc I'm starting to like BakuDeku but I still like BakuShima and IzuOcha (sihbksbvk)... my brain also refuses to do the multishipper thing bc I automatically pair people up in my head so it wants me to pick. Tons of yall on here love it and my girlfriend ships it and I d o n t k n o w w h a t t o s h i p so one side needs to help me over. (Also dont try and get me to ship TodoDeku bc Todoroki is taken in my head already lol)