Adrino is the slash ship between Adrien Agreste and Nino Lahiffe from the Miraculous Ladybug fandom.

Adrien and Nino are best friends who watch each others backs, even though Adrien's tight schedule and his secret life as Cat Noir makes thing a little awkward, as he knows that he can't tell Nino his biggest secret in order to keep his friend safe. All while being unaware that Nino is secretly Carapace, one of his and Ladybug's occasional allies whenever the ladybug-themed heroine temporally intrusts Nino with the Turtle Miraculous. When it comes to Adrien's normal, more free time life, Adrien knows that Nino will always be there to make him smile and to make sure that he has some fun in his life; without needing to becoming Cat Noir for it.

On Nino's end of their relationship, he has no idea that Adrien is one of the superheroes he supports and has fought side by side with as Carapace. When they first met, he could tell Adrien is someone who is in need for a friend and to have some fun in his life, which is why Nino has made it his mission to fill Adrien's life with joy and the occasional support whenever his friend feels sad.

knowing that it I Adrien's birthday, Nino wants to throw his friend a party. Even though Adrien tells Nino that his father won't allow it, Nino was determined to give his friend an awesome party to mark his special day. Adrien tried to stand to his father when Nino came over in hopes of convincing Gabriel to allow the party. In the end Adrien was powerless to change his father's mind while Nino was sent away. Nino was upset that he wasn't able to do something nice for his friend and began to blame parents like Gabriel for making Adrien a prisoner in his own house. Nino's anger caught the attention of Hawk Moth, who turns Nino into the Bubbler. After catching all the in the city in his bubbles, he begins to set everything up for Adrien's party. Even though the guests didn't want to be there.

Due to the scipe call Adrien was on with Marinette in "Anansi", he became aware of the danger that Nino, Marinette and Ayla were in when Ayla's akumatized older sister attacks them as the titled villain and races to their aid as Cat Noir. After Cat Noir saves the people on the Ferris wheel while Nino tries to save Ayla, the cat-theme hero gets Nino to safety before he goes to complete Nino's task, but ends up being stuck to Anansi's web. Nino uses Cat Noir's staff to fight Anansi while Cat Noir calls out fighting advice to help his friend, until Ladybug swings Nino out of the fight, so she can give Nino the Turtle Miraculous without anyone but her knowing his secret and hero identities. As Carapace he and Ladybug were able to defeat Anansi and save Cat Noir and Ayla, Cat Noir wasn't very sure about the idea of him being replaced with a turtle but Ladybug's of him being irreplaceable allows him to welcome Carapace as a new friend and ally. All without knowing that the turtle-themed hero is in fact Nino Lahiffe.

In "Party Crasher", Nino decides to show Adrien what it is like to have friends over, by hosting a boys-only party in Adrien's honour, as "hang out time", while his father is "away". The party came as a delightful surprise and Adrien is glad to have Nino and the others over, along with learning the joy of having friends over. To help get the party started Adrien shows Nino old records that were his mother's.

Adrino is one of the most supported slash ships between Adrien and Nino in the Miraculous Ladybug fandom. As it is seen as one of the main slash ship's since the first season of the series. The ship's support grew after Nino got a Miraculous of his own, and the Two friends began to help one another as fellow superheroes. Even though Cat Noir has no idea that Carapace is Nino. Some artworks have Adrian sharing his secret with his best friend and have Nino telling Adrian that he is Carapace. Similar to how season four has Marinette telling Alya that she is Ladybug.

Since Timetagger reveals that during the time of their adulthood, Ladybug and Cat Noir have assembled a team of Miraculous holders, that might have Nino as one of its members. 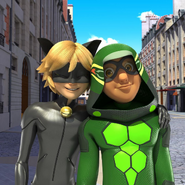