“Aerith: How 'bout this, then? Think of something fun. After saving Sector 7, you're gonna...?
Tifa: I'm gonna... Go shopping—topside! I'll buy... Stuff for the bar! Decorations, coasters...
Aerith: Can I come?
Tifa: You'd better!
Aerith: Then it's a date!”

Aerti is the femslash ship between Aerith Gainsborough and Tifa Lockhart from the Final Fantasy fandom.

While both women spend a lot of time in Midgar, the separate sectors that they resided in, however, didn't allow them to cross paths with one another until Aerith sees Tifa being brought to Don Corneo in Sector 6 and decides to help Cloud Strife save her from Coneo. As she knows what kind of man he is and has recently became good friends with Tifa's childhood friend. After Aerith gets herself and Cloud presentable, they make their way to where Tifa is being held at. Tifa recognized Aerith as the woman she saw Cloud with and even though she understands that Aerith wants to help her escape from the Don's grasps, Tifa kindly explains that she never need rescuing and how she is trying to get information on Shinra from Corneo, after hearing men asking about AVALANCHE. Since Tifa needs to be one of the three girls to be picked, Aerith reassures Tifa that she and a cross-dress Cloud can serve as the other two girl beside her, so it wouldn't matter which one of them gets picked and Tifa will still be able to get what she came for. Tifa didn't like the idea of dragging Aerith into their affairs, but she still allows her to help them. In the remake after Cloud gets picked by Corneo, Tifa and Aerith are brought into a room where Corneo's men plan to have their ways with them, but both women knock them out before they could and high five each other. Before the two women go to Cloud's aid, they change back into their normal clothes.

Once they learned what Shinra's plans for Sector 7 are and knew that they couldn't stand by and let innocent people die, Tifa asks Aerith to get Barret Wallace's adoptive daughter to safety while she does what she can to save the said Sector. Tifa and her friends end up failing their task, and to make matters worse the Turks had captured Aerith and brought her back to Shinra headquarters. Where she would be used in one of Professor Hojo's inhuman experiments. After Aerith's adoptive mother explains that Aerith is the last living Ancient on the Planet and knew that Shinra wouldn't let her go because of it, Tifa and the last of AVALANCHE go to rescue her. Shortly after they saved Aerith and were making their escape with their new friend, Red XIII, Tifa lets Aerith sit next to her in the getaway trunk.

After Aerith, Tifa and their party escape Midgar, they agree to help Cloud in his quest to hunt down Sephiroth and stop him from reaching the Promise Land. Since Aerith wishes to learn more about her Ancient heritage and Tifa wasn't going to let her friends fight Sephiroth alone. When they got to Gongaga they come across Zack Fair's parents who are worried about their son, while the mention of Zack, as he was Aerith's ex-boyfriend and the SOLDIER that Tifa met six years ago, causes both of them to rash out of the house. As their journey takes them to the Temple of the Ancients, where Aerith learns more about her heritage and finds out they need the power of Holy, she leaves Tifa and the others as she makes her way to the Forgotten City. Even though they were able to catch up with Aerith in the Forgotten City, as she meditates to call upon Holy, Sephiroth murders Aerith. Tifa kneels by her body before running away in tears. She later watches Cloud place Aerith's body in the water.

Devastated by Aerith's death, Tifa knew that they must continue their hunt for Sephiroth, as their journey brings Tifa and the others up north. Where they find recordings that were made by Aerith's parents, before Hojo found them and brought Aerith and her mother to Shinra while her father was killed by Hojo's men. Just as Tifa's father was killed by Sephiroth, who later turns out to be Hojo's son. From within the Lifestream, Aerith continues to aid Tifa and their friends as they work to save the planet from Meteor.

One year later, in the events of Final Fantasy VII: Advent Children, Aerith's possible presence in the Sector 5 Church, as a spiritual avatar of the Lifestream, could have been what healed both Tifa and Cloud as they lay in its flowers.

Aerti is viewed as the main femslash ship of the Final Fantasy VII fandom, and is sometimes rivaled with the het ships Clerith, Cloti and Zerith. The ship's popularity grew after the FFVII Remake was released and showed a few Aerti-like moments.

Because both FFVII women appear in the Kingdom Hearts series through KHII, fans sometimes like to focus on their KH counterparts in KH related fan made work. Like MMD Art fan-comics, of the KH/FF fanon universe, and fanfics, beside the other FF and Disney characters with the original KH characters. The rare KH side of the femslash ship could also have it being rivaled with the het ship, Squaerith. 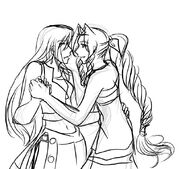 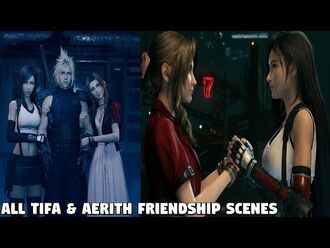