Married; both are dead

Agduna is the het ship between Agnarr and Iduna from the Frozen fandom.

When Prince Agnarr visited the enchanted forest with his father and a few royal guards, he notices the forest's wind spirit playing with a Northuldra girl in the distance and begins to slowly make his way towards her, but before he could get a chance to have a proper look at her face, she gets spirited away by the wind spirit. When the Arendellians and Northuldra began to attack each other, Agnarr witnesses his father's death before he gets knocked unconcise in the chaos. Once the Northuldra girl from earlier, Iduna, notices the defenceless Arendellian prince she decides to save him, despite what his people have just done to hers. With help from the wind spirit, the two were able to escape the mist that the enraged spirits cast upon the forest. Because of what happened in the forest and the mist that now surrounds it prevents people from either leaving or entering the forest, Agnarr becomes Arendelle's new King while the bad blood between their people forces Iduna to hide her Northuldra origins, as she begins to live a new life in his kingdom.

As the years passed since that fateful day, Iduna never told Agnarr that she was the one who saved him as the two grew up from childhood friends to lovers, before becoming husband and wife. Since Agnarr was forced to become king at a young age, his friendship with Iduna allows him to find slithers of joy and happiness through her. Because Iduna had choice to save the prince of her people's enemy that day, the spirits granted their first born daughter with magical powers over ice and snow, while Anna was born without magic. Even though neither Agnarr or Iduna know why Elsa was born the way she was, it didn't stop them from loving their daughter as any parents would. One night when the two went to tuck their daughters to bed they see them playing a game called "Enchanted Forest", it gets Agnarr to tell Elsa and Anna about his time in a real Enchanted Forest, even though a part of Iduna didn't want Agnarr to tell them the story Agnarr felt that their daughters have a right to know encase the forest ever awakens. In the novel, A Frozen Heart, it reveals that whenever Agnarr gets angry Iduna would be there to calm his nerves. While during the winter holidays, Agnarr and Iduna ring the Yule bell to mark the beginning of it, with their daughters ringing it with them (which was shown in a flashback scene from Olaf's Frozen Adventure).

After Elsa accidently struck Anna, Iduna stands by Agnarr's decision to keep the sisters apart until Elsa regains control of her powers. While hoping that their choice to isolation their family from the rest of Arendelle would be temporary. Both Agnarr and Iduna have tried to help Elsa since that night, but her fears of hurting her family again kept her from approaching her parents, which saddens them. With little choice and hoping that Ahtohallan would be able to help them gain a better understanding of Elsa's magic, the two decide to seek out the memory holding river, while keeping their true destination and reason for their voyage a secret. As their ship sails across the dark sea, however, they get struck by a terrible storm that claims their lives, while they embrace each other one last time before they were swept away by the harsh waves. Agnarr and Idunas' deaths were mourned by the people who loved them, and turned two large bolder-like rocks into their graver markers [1]. Since their bodies were lost at sea, while the two large grave-like stones allows their loved ones to pay their former King and Queen their respects to them (like Elsa and Anna had done in the Once Upon A Time series [2]).

In an earlier version of Frozen II's opening, a young Iduna is seen wrapped in a blanket with Arendelle's crest on it, before she sees a young Agnarr about to fall of the edge of a cliff and rushes over to save him. After he thanks her, the two get spirited away to the escaping Arendellian camp. Just as Agnarr had lost a father, Iduna knew that she'll never see her mother again.

In another deleted scene that has Elsa showing Anna a moment of their parents that she saw in Ahtohallan, Iduna and Agnarr are seen talking about telling Anna the truth about Elsa and how their youngest daughter can help Elsa, along with them planning to do so once they get back from their trip.

One of the sequel's teasers has young Iduna and Agnarr playing with one another, before the wind spirit joins in to lend Iduna a hand in getting the better of the young prince.

Elsa is Agnarr and Iduna's first born daughter and heir to their throne who was born with magical powers over ice and snow. Elsa's abilities were a gift from the four spirits of the Enchanted Forest, as they rewarded Iduna for rescuing Agnarr. For a long time either of them knew why their eldest was blessed with magic powers, Elsa seeking the answers to that very question allowed her to uncover the secrets of the past, along with learning a bit more about her parents, before and after she became the fifth spirit of ice. When Elsa learned that she is the reason why her parents went on the voyage that killed them, she began to blame herself for their deaths even though Anna tries to tell Elsa that it wasn't her fault.

Anna is Agnarr and Iduna's second born daughter. When Anna was little her memories of Elsa's powers were taken from her mind after she got struck in the head by them. Her parents kept them apart for their safety until Elsa learns to re-control her icy magic. Many years later, Anna's love for Elsa helps her to master her powers and their sister bond became stronger than ever. Three happy years later, Anna gains the heart and wisdom of a leader from her time in the Enchanted Forest where she rallies the trapped Arendelle guards for her task of lifting the curse. After Elsa became the forest fifth spirit, Anna helps her sister to bridge the two worlds together by serving as their kingdom's new queen. To make sure that the Arendellian never forget the friendship they share with the Northuldra, Anna requests a statue of their parents' young selves to be made, since they and their daughters are proof that their people can get along with each other.

After the first Frozen film came out, Agduna was the less popular ship of the Frozen fandom until their backstory being a big part of the second film's plot gained the ship a lot more supporters. Which is why many of the ship's current fanwork has them as their young selves and imagining that their time growing up together would have been like, before their daughters were born. Along with imagining what it would have happened if the two had properly met in the forest, like the two had done in a few of the film's earlier teasers. There has also been fanart that depicts the two living together in the Enchanted Forest, one way or another. A few fans of the ship are also hoping for a prequel film or short on the two during their youth, so they could see more of their shared moments together before Iduna became Agnarr's queen.

On AO3, the ship has 58 fanfics, while fanfiction.net has over 194, with only 29 placed under pairing. Along with Agduna having a reasonable size fanbase on Tumblr. 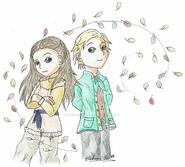 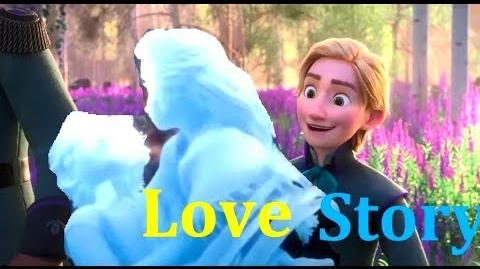 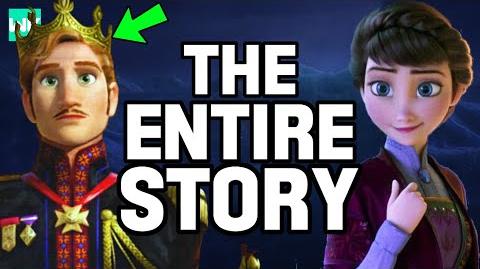