Agent Reign is the femslash ship between Alex and Sam from the Supergirl fandom.

Alex meets Sam for the first time at the unveiling of the Supergirl statue. Alex talks to Sam's daughter Ruby and they have a great moment, Alex complimenting Sam on her great daughter.[1] They later become friends through Kara when the former hosts a girls night at her loft, which also includes Lena and Maggie. They talk about relationships and Alex asks about Ruby's father and how Sam manages to be a single mother. She says it's tough, but great and that she and Maggie will see when they have kids. Alex gets a little verklempt and says that they're not gonna have kids. Sam apologises for assuming, but rejoices in Maggie's suggestion that they'll be cool aunts, which Alex joins, along with Kara and Lena. Ruby has a recital that Alex, Kara and Lena attend, where Ruby sings a solo number. Sam is so happy that they are there and Alex gets incredibly upset during Ruby's performance, realising that she does want children and it puts a question mark on her engagement to Maggie.[2]

Alex quickly bonds with Ruby and spends time with her at gatherings. When Sam has a business trip, an injured Alex offers to babysit and helps Ruby with a school bully. Alex is there for Sam when she realises that she's been losing time and goes with Sam to LCorp to run an MRI scan for her. The images don't show anything and Sam opens up to Alex about how, like Alex, she's always been tough and forced to take care of herself and Ruby, plus everything else in life, on her own. Alex promises Sam that she won't let Sam close herself off to Alex and other people who care about her, such as Kara and Lena. Alex also playfully gives Sam a lollipop. Inspired by Alex's support, Sam feels okay to tell Kara and Lena what's been going on and the three women promise Sam that they are there no matter what.[3]

After the Sanvers break up, shippers were split into two groups. Those who thought that the two would get back together, and those that didn't. Those in the latter group thought that Alex would end up getting a new love interest. Sam's introduction around the point of the break up mixed with Alex wanting to be a mom (which Sam is), caused many to ship the two. Although Season 3B did not give them much screen time together, the pairing has grown in popularity and is fairly common. It is arguably the 3rd most popular Supergirl femslash pairing. The ship is also commonly shipped with Supercorp as a collective family of Kara, Alex and their spouses. 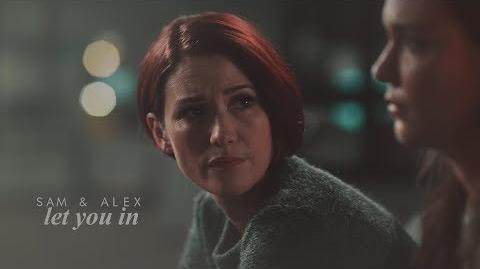 Sam alex let you in

Retrieved from "https://shipping.fandom.com/wiki/Agent_Reign?oldid=169244"
Community content is available under CC-BY-SA unless otherwise noted.