Shipping Wiki
Register
Don't have an account?
Sign In
Advertisement
in: Ships, Ships/Familyships, My Hero Academia/Ships,
and 9 more

Aizawa Family is the family ship between Shota Aizawa, Hizashi Yamada. Hitoshi Shinsou, and Eri from the My Hero Academia fandom.

Shota Aizawa and Hizashi Yamada have been close since they met during their days as U.A students, now working alongside each other as not just Pro/Underground Heroes, but as members of the U.A staff. Despite contrasting in their entirety, they still appear quite close, close enough that fans became rather suspicious to the possibility that they could be secretly husbands, keeping their marriage under wraps as to not allow leverage for villains.

After the events of Shie Hassaikai, Eri came to stay at U.A., and Shota became her protector, guardian, and foster father all at once. Knowing that she’d need new clothes after being discharged from the hospital, he bought her a matching set of cat-themed clothes, although they were admittedly gaudy and an eyesore. As Eri's caretaker, Shota has been teaching Eri about different holidays, since she was unable to learn about them from her birth parents or while under Overhaul's control. He often brings her to socialize with his students, especially on holidays or special events. Shota is protective of Eri, and attempts to help train her to use her quirk, making sure to not lay too much pressure on her little shoulders.

Hizashi also plays the role of caretaker towards Eri, being shown in light novels to help Shota out in buying things for her. For Christmas, he bought her a small DJ set, and helped Shota sneak it, and several other presents into Eri’s room. and went with Shota to sneak his gift, alongside others, into Eri's room on Christmas Eve to leave the gift for her. Hizashi also notices, and watches over Shota's mentoring of Hitoshi. He even told Shota that he thinks he took an interest in Hitoshi because he sees himself reflected in the boy.

Shota is implied to have taken interest in Hitoshi post Sports Festival after seeing his capability. He decides to help him train his way to the hero department, despite not being able to outperform the hero students in the Sports Festival. He trains Hitoshi to use the same capture weapon he does, as they both do not have quirks very suited to attack. Hitoshi struggles with the weapon early on, but Shota comforts him, and encourages him to use his frustration as motivation. He later on tells Hitoshi not to berate himself, as the other students have been through a lot to get as strong as they are.

Soon, Shota then gets the okay from Principal Nezu to move Hitoshi to the hero program, starting in his 2nd year.

It was hard to miss the paternal role Shota took towards Hitoshi and Eri, and many fans grew rather fond of the concept of him adopting them. The popularity of EraserMic, as well as the general closeness Shota and Hizashi have, lead to Hizashi being added into the ‘family’, along with him showing care for both Hitoshi and Eri. Most fan works of the Aizawa Family portray Shota and Hizashi being married or at least dating, and having adopted Hitoshi and Eri. Hitoshi often ends up becoming another big brother figure to Eri, similar to Izuku and Mirio in canon, and is very protective of her. Characters like Nemuri Kayama or Emi Fukukado are also often portrayed as the 'fun aunts' to this family in many fan works. 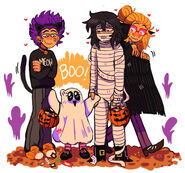