AkaKen is the slash ship between Akaashi Keiji and Kenma Kozume from the Haikyu!! fandom.

Akaashi goes to Fukurodani and is the vice-captain of the volleyball club while Kenma goes to Nekoma. Both characters are 2nd years and also the setters of their teams. They are both more anti-social than their respective peers; usually preferring to stay quiet in conversations and only talk when needed. Though, this case is more represented on Kenma's side. They are good friends with each other and are often seen talking when Bokuto and Kuroo are interacting.

During the first time out of the Fukurodani vs Nekoma match, Kenma paused next to Akaashi and told him his observation on how on point Bokuto's line shots are. Akaashi replied by saying they both knew how unpredictable Bokuto could be. Akaashi later noticed when Kenma and Kuroo switched places while blocking Bokuto. Later after Akaashi succeeded in encouraging Bokuto to do a cross shot, he smiled up at Kenma as Nekomata praised Akaashi for getting Bokuto back up on his feet.

During the Nekoma vs Karasuno match, Akaashi was spectating along with Bokuto. He also sometimes commented on the things Kenma did. An example of this was when Kenma moved to toss instead of waiting for the perfect receive.

This ship is considered a rare pair as the two don't often interact outside of the Land VS Air OVA. One topic in fanwork is using cats and owls, due to the characters' teams. Fans view the two of them as tired boys that should stick together. Many people ship it along with BoKuro and it is rivaled by BokuAka and KuroKen. Although, there are some that ship AkaKen within the BokuAkaKuroKen polyship. The only other notable rival ship is KenHina.

AkaKen is a more notable frienship pairing, with fans seeing them as good friends, mostly because they both have similar personality traits and with their respective captains being the more energectic types, fans believe that Kenma and Akaashi should both take a break from the latter.

Kenma and Akaashi stopping to talk to each other. 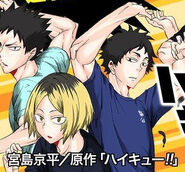 BokuAkaKuroKen refers to the ship between the two, Kōtarō Bokuto and Tetsurō Kuroo