Friends/Classmates; Both are dead

Akahoshi is the het ship between Kaede Akamatsu and Ryoma Hoshi from the Danganronpa fandom.

Both characters take part in the killing game, but they don't have many canon interactions. They met in the game room on the basement floor of the Ultimate Academy for Gifted Juveniles. He immediately says that he is only the shell of Ryoma Hoshi, and is not who he used to be, and to not get close to a murderer like him. He empathizes with Kaede's plan to escape with everyone else, saying it isn't a bad idea. After all the students gather after trying to escape the Ultimate Academy for Gifted Juveniles, Ryoma doesn't blame Kaede for making everyone keep trying.

After Rantaro's body was found, Ryoma warned Shuichi and Kaede that without evidence, their testimonies are meaningless, also telling them to be careful. Ryoma remained skeptical of Kaede being the culprit until the very end where there was no doubting it. Though Kaede was obviously the culprit, he didn't put any of the blame on her. That makes sense as Kaede was trying to kill the mastermind, not one of the other students. Ryoma was remorseful towards Kaede's death, as he said he couldn't remember the last time he had felt so irritated.

During their first Free Time Event Kaede says that thinking about Ryoma playing with a cat is pretty much the cutest thing ever. Ryoma answered, embarrassed, that she shouldn't go judging people by their appearance. Meanwhile, their second Free Time Event Ryoma says she shouldn't talk to him since he is a murderer. She doesn't mind at all, Ryoma looks confused and then she tells him that she trusts him. Kaede also says, since Ryoma accepted his crime and also is making up for it as a prisoner, he shouldn't bear such a burden alone. In the end Ryoma mentions her words and voice inspire people's heart just like the melody of a piano.

In the non-canon Ultimate Talent Development Plan, he played table tennis against Shuichi and commented that Kaede wasn't there to see Shuichi's victory, which she is embarrassed by.

On AO3 their ship has a total of 1519 results. Even though they have a decent amount of works on AO3 they're still considered a rare-pair since they have limited amount of interactions with each other. Even though they are a rare-pair the ship has been gaining popularity. However this ship is overshadowed by many of their inclusion in other popular ships like Irumatsu and Saimatsu for Kaede and Tojoshi for Ryoma. Although it still has fair amount of supporters.

Some reasons people seem to enjoy this ship is because Ryoma and Kaede being seemingly understanding of each other. They also have similarities like how both have a thing for cats. A lot of people also think that Kaede could be good for Ryoma since Kaede is positive and kind. Some other people think their height difference is cute. People who don't ship AkaHoshi still respect the ship and think they're cute or prefer them as good friends. 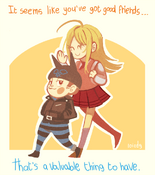