Akane x Food is the cargo ship between Akane Owari and food from the Danganronpa fandom.

Akane throughout the game (as well as Despair Arc and Future Arc) loves to talk about her appetite and loves to eat food. She can get hyper when she sees food though we mainly see her eat some sort of meat mostly. We can assume that her favorite food are meat because of that. In Danganronpa 2 Goodbye Despair, there are certain sprites that are used for Akane when she sees food, is hungry or is eating, for example, these two halfbody sprites. One of the sprites show Akane's mouth being stuffed with food while the other sprite shows Akane drooling over food.

In Hajime's Free Time Events with Akane, Akane often mentiones food. One time she asks him if he eats enough because he looks pretty "bummed". Another time, after Hajime asked Akane if she needed to cosplay for her moms boyfriend, Akane asks if cosplay is tasty. In her fourth Free Time Event with Hajime, she asks Hajime to go with her, to find some food. Later, Hajime asks her if she's hungry and Akane answers that she is always hungry before a meal, and that as soon she finishes eating, that means its "before a meal". In Akane's record card, its also mentioned that she likes meat.

Her love for food was caused by a lot of childhood trauma. Akane used to live in a very poor area with her siblings and because they were so poor, she’d always try and find food for her and her siblings by looking in trash bins or having a fight with other people. When growing up she started working part time jobs for money, and when she worked as a waitress she would always steal the left over food. In the Danganronopa, Hope-Arc OVA, Akane fights with 2 bones of meat against her enemies. One of the reasons why Akane appears to be friends with Teruteru Hanamura, who is mostly disliked by his classmates because of his perverted nature, is because he as the Ultimate Cook can of course cook well.

The cargo ship sailed, due Akane being almost obsessed with food. So the fandom created the cargo ship, as a joke or meme. Many people call "Akane x Food", best ship for a joke. Several fan arts, have been created of the ship, were Akane is eating her food, sometimes Nekomaru Nidai is also included in the images, most likely because of the popularity of Akanidai. While the ship is a decently popular cargo ship, it still gets overshadowed by other popular cargo ship's in the Danganronpa fandom, namely, Hope Bagels and Junko x Despair. The popularity of Akane x Food, may also got increased because of this video named, Owari vs. Food. 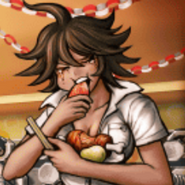 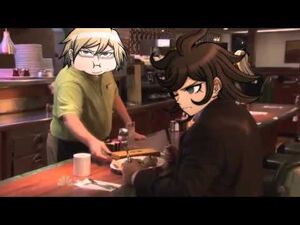