• Pair the Smart Ones - As both Albedo and Sucrose are two highly intelligent characters of similar age.
• Lonely Together - Both dislike social interactions for different reasons, but they make an effort and enjoy their time together.
• Birds of a Feather - Albedo and Sucrose are two introverts deeply interested in alchemy who get each other.
• Flowers of Romance - Albedo made a Wondrous Lovely Flower for Sucrose in the Windblume Festival.
• Respected by the Respected - Sucrose has the utmost respect for Albedo and often refers to him as “Mister”.
• Don't Call Me "Sir" - Stated from Albedo's voiceline, he thinks Sucrose is quite stubborn as she often calls him "Mister" even though he has already told not too numerous times.

Albecrose is the het ship between Albedo and Sucrose from the Genshin Impact fandom.

Attached to the Knights of Favonius, Albedo is the Captain of the Investigation Team and Chief Alchemist, while Sucrose works as his assistant with a focus on bio-alchemy.[1]

As his assistant, Sucrose looks up to Albedo, respects and admires him to a fault. She thinks that Albedo is very talented and smart. Sucrose tries her best to support him, while doing her own research. The purpose behind it is what she calls a little secret[2], as she wants to create her own wonderland - just like the ones in fairy tales.

As for Albedo, although Sucrose says herself her purpose of research is a bit of a secret, he states that he more or less understands why she is so dedicated to her research in bio-alchemy.[3] He says that working with Sucrose is quite pleasant, but complains about how stubborn she is outside of research, as she often refers to him as “Mister Albedo”, despite Albedo himself telling her numerous times to just call him by his name, since they are about the same age.[4]

Both Albedo and Sucrose spend most of their time as a recluse. The first due to his slight distaste for talking with other because of the trouble needed to maintain the social relationship[5], though he does not stutter like his assistant. The latter, Sucrose, expresses that “[t]alking is hard, so much harder than alchemy” due to her fear of offending someone or sounding impolite, because each personality is different.[6]

At the start of Albedo’s Story Quest, Traveler meets Sucrose, who praises Albedo and his many skills. Upon hearing his accomplishments, Traveler and Paimon decide that they want to meet him. Sucrose tells them to look for a refined gentleman with the presence of a true scholar and bids them farewell.

The Chalk Prince and The Dragon

“If not for Sucrose, no one would have known that Albedo is hiding a great secret — one that involves a mysterious unknown sword and a mountain entombed in ice for millennia... Onwards and upwards, Traveler! In spite of the bitter cold...”[7]

In Act I, Traveler sees Sucrose outside of Dragonspine so Traveler asks her what she was doing. Sucrose answers, saying that Timaeus and her were helping Albedo researching data. Sucrose tells the Traveler that she feels that Albedo is keeping a secret from her and asks the Traveler to try and discover the secret that Albedo has.

In Act IV, Traveler and Paimon run into Sucrose on the Dragonspine mountain, who rescued Reckless Pallad from the cold. After showing the Festering Desire sword to Sucrose, they return to the makeshift adventurer camp to grab food, and they run into Reckles Pallad who has gotten lost again. As they tru to leave, the Fatui arrive and she takes Pallad to a relatively safe place. Albedo hears the ruckus and rejoins the group. He reveals that he knew curious Sucrose would eventually find her way here and that she could not be kept in the dark for too long due to her magnetism to the obscure knowledge and mystery - as those are the traits that make her a great alchemist. She tries to promise that she will not cause trouble anymore, but Albedo replies that it is not trouble what worries him, he is only concerned with her safety and wants her to be more careful next time.[8]

Albedo sighs and asks about the adventurer over there. Sucrose says that she took it upon herself to protect “Mister” Pallad during the battle, and that he should be alright - however, he seems to have caught a cold so she goes to check on him. While she is gone, Paimon comments on Sucrose being a bit rigid, but having a heart of gold, to which Albedo replies, “That girl... Let her out of your sight, and she winds up in the strangest of places.” The traveler then asks him to not be too hard on her, and Albedo says there is nothing to worry, as he is not angry.[9]

As Sucrose check on Reckless Pallad, he pushes her aside and she falls on the ground, having mistaken the Festering Desire’s light for a source of warmth.

In Act III of the Windblume Festival, Traveler talks to Timaeus to discuss his poetry homework, however, he was unable to start it in the first place because Sucrose tasked him with helping her at deciphering an ancient alchemical recipe for what she claims is a “Windblume”[13], as for Sucrose, something about it being “extremely precious” made her think of it.

As per her request, Traveler then goes to see Albedo at the campsite outside of Dragonspine with Venti. Albedo then asks Traveler to gather ingredients. After Traveler has gathered the ingredients and Albedo has made the recipe, what Paimon recognizes as a “Big Sweet Flower”[14] stands on the alchemy table. Albedo laughs and says, “It really does make me think of Sucrose.” Venti nods, saying, “Huh, it does seem like something she would like.”

Once the Traveler goes back to Mondstadt to see Sucrose and Timaeus, and shows her the result of Albedo’s alchemy, she uncharacteristically starts talking very excitedly and fast, claiming “This is the Windblume of my dreams... a Tetratanic Sweet Flower. Bigger, stronger, sweeter and more beautiful - a perfect Teyvat species!”[15] “Whatever people say, this is my Windblume!” To which Timaeus adds “Sucrose...is consistently Sucrose,” before she leaves to search resources for her flowers.

In Act IV of the Windblume Festival, at the end of the act, there is a cutscene where Sucrose waved at Albedo and the latter waving back at her and Timaeus.

We first meet Surcose who was done talking with Albedo along with Timaeus. Sucrose was starting to get worried for Albedo when he started to leave for Dragonspine with an unusual look on his face. She then thought that maybe Timaeus's research topic was boring and Albedo started to get snapped. Although this thought was denied later when Albedo told the Traveller that he went to Dragonspine for his paintings and starsilvers. Paimon later told Timaeus that she wanted to make a machine that can gather multiple sunsettias. Timaeus quickly refused to do it because he isn't really a professional to those kinds of topics. Sucrose also added that Timaeus isn't able to make those kinds of machines was because he isn't an alchemist who focuses on those kinds of works. She later suggested that Paimon and the Traveller should look for Albedo if they wanted to make that kind of machine. But she later stated that they shouldn't put their hopes up since Albedo isn't interested in those kinds of things.

“Sucrose? I think I more or less understand why she is so dedicated to her research in bio-alchemy... Either way, I'm happy to see her succeed more and more in her endeavors.”
— Albedo Voiceline about Sucrose: Direction

“Working with Sucrose on alchemy research is quite pleasant, but she has some... stubborn qualities in regards to certain aspects unrelated to research. For example, I have told her numerous times to just call me “Albedo” since we are about the same age, but she insists on addressing me in an excessively formal manner. ...Whatever she prefers, I guess.”
— Albedo Voiceline about Sucrose: Habit

“Talent? Let’s hypothesize that he and I were to perform the same research — I’d spend my whole life playing catch up. But, my studying of bio-alchemy has nothing to do with evading his line of research, we just happen to have different interests and dreams — nothing more.”
— Sucrose Voiceline about Albedo: Talent

“As his Assistant I learn so much each and every day. What’s key is not his existing knowledge, but his talented way of thinking. No matter how complex the task at hand, his way of thinking ensures he gets to the bottom of it, and is able to explain it thoroughly. His methodologies are amazing... to me, its where alchemy meets art.”
— Sucrose Voiceline about Albedo: Artistry

“Feel free to use the alchemist’s upstairs from the library whenever you want. But make sure you knock first, we wouldn’t want you seeing anything you’re not supposed to, now would we?”
— Lisa’s Voiceline “Something to Share”, about the alchemist’s workplace.

Albedo – “Alchemy is a mysterious art that revolves around all living things. And the study of life, in particular, requires painting.”
Sucrose – “Yes, you certainly make wonderful paintings of anything that piques your interest, Mr. Albedo.”
— Sucrose saying that Albedo’s paintings are wonderful in Albedo’s Teaser

Albedo – “Oh? Is that so?”
Sucrose – “Just like always! Overly passionate about what piques your interest, yet completely indifferent towards anything otherwise...”
— Sucrose lowkey reprimanding Albedo for creating such creatures in Albedo’s Teaser

Sucrose – “Ah... Uh... I promise I won’t be causing trouble anymore. I swear on the quadruple-size Sweet Flower seeds I just propagated!”
Albedo – “It’s not trouble that worries me, I’m only concerned with your safety. You must be more careful next time.”
— Sucrose apologizing and Albedo telling her to be more careful in The Chalk Prince and the Dragon, Act IV

Alberose sailed due to their interactions in the game, their character storys and voice lines. On AO3, there is about 400+ Fanfictions. Alberose gained attention due to the 1.2 update of Dragonspine. It is Sucrose’s most popular and Albedo’s second most popular ship. Kaebedo is currently Albedo’s most popular pairing. However, Kaeberose, the polyamorous relationship between Kaeya, Albedo and Sucrose also exists.

Sucrose with a few Slimes in Slime Paradise Event

Promotional Image for The Chalk Prince and The Dragon

Characters that cooked their dish in Dragonspine

Alberose and Klee in the Anniversary Theater Event. 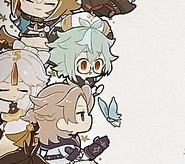 Alberose in the Anniversary Flower Stall 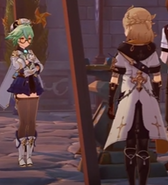 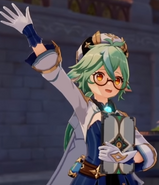 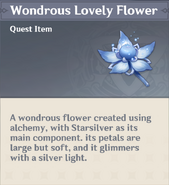 Sucrose’s flower made by Albedo 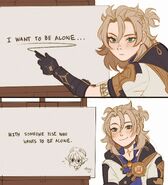 Kaeberose refers to the ship between the two and Kaeya Alberich.