Xingbedo, Creators of The Legend of Sword

Albeqiu is the slash ship between Albedo and Xingqiu from the Genshin Impact fandom.

Xingqiu once wrote a martial arts novel named "A Legend of Sword" based on his own experiences, intending to publish it in Liyue Harbor. Albedo was the illustrator for this book, and he also drew the cover page. Eventually, after collaborating "A Legend of Sword" was printed and published. Xingqiu's manuscript was rejected by local publishing houses, who believed that no one would have any interest in a story with "a setting as wildly unrealistic as the plot is banal." Their book received lukewarm reviews, being lambasted as "a dictionary with divine illustrations."

Undeterred, Xingqiu had a few copies printed privately, and sneakily placed them on the shelves of Wanwen Bookhouse during one of his many trips there. But just as the publishers had suspected, it failed to garner much interest from readers. This was quite a blow to Xingqiu's confidence. Unbeknownst to him, however, a passing merchant from Inazuma did purchase a copy to bring home, where it received rave reviews. Writers the region over attempted to copy the success of "A Legend of Sword," but none succeeded — it maintains permanent residency in the number one bestseller spot to this day.

During the Irodori Festival Xingqiu finally meets Albedo. Xingqiu was a writer invited for the Irodori festival. When he finally arrives there, Xingqiu is surprised to see the Traveller and Paimon in Inazuma and learns that they'll be his guide for the festival. He also finds a paper stuck on his bag and shows it to them, which Paimon realizes is one of the Five Kaisen excerpts, much to his confusion. Paimon bluffs they're part of a "Poem Hunt" competition and that the winner has a chance to be a model for the artist, which Xingqiu immediately deduces that Albedo must be the one painting and is excited to see him in person. He then realizes he would be busy with the art but the Traveler and Paimon insist he'll have time.

In Ritou's center, Xingqiu and Albedo are pleased to meet each other in-person. Xingqiu is very polite and acts nervously around Albedo. He admires Albedo for his illustrations. Xingqiu insists calling him "Calx", as he says calling him by his real name would be most impolite. Traveller comments that this is the first time they've seen Xingqiu act so awkward around someone. They even tease Xingqiu, much to the latter's chagrin. Albedo says he knows Xingqiu well since they've communicated in the past through letters. Both are appreciative of each other's work.

During Hues of the Violet Garden, Albedo paints portraits of The Five Kasen-based primarily on members of the party assembled at Ayato's invitation. Xingqiu is the basis for Aoi no Okina.

“I've thought of all the illustrations I want for each of the major event in the next three volumes! I should write my thoughts down before I forget them, and send them to Mr. Kreideprinz...”
— Xingqiu in "About Albedo" Voiceline

“Oh, Xingqiu? I find his written works quite interesting. The Yae Publishing House in Inazuma has been asking that I cooperate with a different author for greater royalties. Hmph, do I seem the type to be swayed by a few extra Mora?”
— Albedo in "About Xingqiu" voiceline

Albeqiu sailed because it fits in the popular trope of writer x artist. Fans liked the idea of Xingqiu and Albedo creating a book together. This ship rivals Xingyun and Kaebedo, Xingqiu and Albedo's most popular ships respectively. There's a decent amount of fan art of Albeqiu, as well as fan fiction. There are currently 64+ Albeqiu works on AO3. 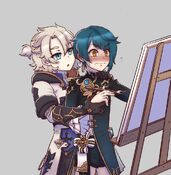