Alphyne is the femslash ship between Alphys and Undyne from the Undertale and Deltarune fandoms.

If the player befriends Undyne, she tells about Alphys. This is only possible in a route where Frisk does not kill any monsters prior to their encounter with Undyne. Meanwhile, in a Genocide Route, Undyne the Undying mentions Alphys as one of the monsters she failed.

A hint of Alphyne happens during Mettaton's Quiz Show when Mettaton asks who Alphys has a crush on and the player answers Undyne. The answer shows up as correct (although other answers also show up as correct). This only happens in routes where the player never encountered Undyne the Undying.

Afterwards, if the player is on a True Pacifist Route, Undyne asks Frisk (the human) to deliver a letter to Alphys (a confession letter). Frisk does that, but Alphys assumes the letter is from the human so the two go on a date. Alphys mentions that the contents of the letter were "passionate". Undyne has written this letter. Before the date, many not-so-subtle hints show that Alphys has been hoping to go on a date with Undyne. Alphys mentions Undyne multiple times, saying how she has a 'good sense of style', etc. and possessing gifts she has 'been preparing for a date like this.' The gifts are metal armor polish, a magical spear repair kit, and waterproof cream for scales. All these gifts relate to Undyne, as she fights with spears, owns a suit of armor, and is a fish-like monster. During the date, when Undyne comes to Frisk and mentions she changed her mind about sending the letter, Alphys hides and later comes out when Undyne leaves. Alphys admits to liking Undyne. Frisk and Alphys end up roleplaying as Undyne and Alphys, so Alphys can practice her talking to Undyne. No matter if Frisk is a casual Alphys/Undyne, or a flirty one, Alphys will yell out an embarrassing line about her love for Undyne, such as "UNDYNE!!! HOLD ME!!!" or "IM UNDYNE AND IM PILING ON THE SMOOCHES!" Undyne heard this and comes over and exclaims "What did you just say..?" but shortly realizing that Frisk and Alphys are on a date. Alphys panics and eventually tells Undyne that she has lied to her about the stuff she said to Undyne to make her seem cooler. Undyne comforts her and offers her to train with Papyrus to feel better about herself.

Before the True Pacifist boss fight, when all of Frisk's friends unite, Undyne and Alphys are both there and run across each other. When Asgore is heartbroken and crying for Toriel, Undyne mentions that 'he will find other fish in the sea'. Alphys cuts in and mentions 'yeah, just stop going after furry boss monsters and just get to know a really cute fish?" This creates a small moment of awkward tension beetween the two. Mettaton cuts in and begs them to kiss because 'the audience is dying for some romantic action.' Undyne immediately tells Mettaton to 'shut up' and comments on 'the nerve of that guy', however, Alphys agrees that they should kiss. Undyne hesitated, then agrees. They are about to kiss, when interrupted by Toriel.

In the credits of the Pacifist Route, Undyne kisses Alphys on the cheek (shown above).

Alphys and Undyne live in the same town. When Kris talks to Undyne, they have the option to bring up Alphys. However, they do not appear to know each other.

Some fans feel disappointed that Undyne and Alphys are not together and do not seem to know each other in Deltarune. 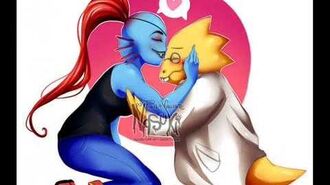 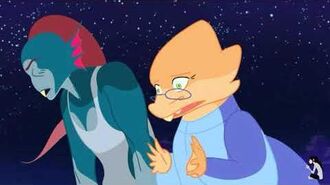 Alphyne amv- I kissed a girl 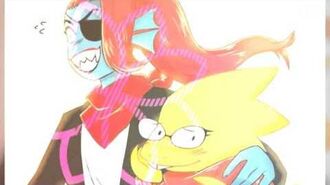 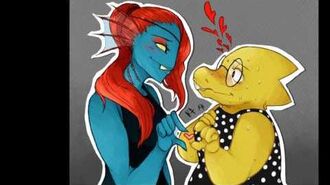 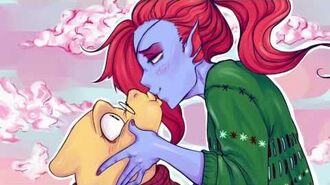 They Don't Know About Us (NC)-Alphys X Undyne 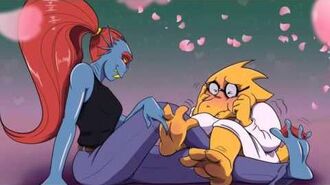 Retrieved from "https://shipping.fandom.com/wiki/Alphyne?oldid=203709"
Community content is available under CC-BY-SA unless otherwise noted.