Shipping Wiki
Register
Don't have an account?
Sign In
Advertisement
in: Ships, Ships/Het, Alvin and the Chipmunks/Ships,
and 5 more

Alvin and the Chipmunks

“You know Brittany, all I ever wanted was for you to be my Queen Valentine.”
— Alvin; I Love The Chipmunks Valentine.

Alvittany is the het ship between Alvin Seville and Brittany Miller from the Alvin and the Chipmunks fandom.

Ever since the second episode of the 1983 Alvin and the Chipmunks animated series Alvin and Brittany have had a love/hate relationship. Developing from a squabbling rivalry, to a competitive friendship, to eventually an on-again/off-again dating relationship.

Brittany, as well as the other Chipettes, were introduced to the series to be the female counterparts and romantic interests of Alvin and the other Chipmunks. In their debut Brittany and her sisters competed against Alvin and his brothers for the right to use the band name The Chipmunks. However, even though the girls won the contest the boys keep the name The Chipmunks while the girls become The Chipettes, and they all end up performing together.

The Chipettes begin to attend the same school aa the Chipmunks, coincidentally at the same time as they're holding the election for School President. Finding out the Alvin is running for president Brittany decides to run against him, seeing it as a fast way to become popular. Alvin eventually won, due to the fact he's been at the school longer. Alvin's first act as president is to hold a party to officially welcome Brittany and the Chipettes to the school. Through out their early interactions Alvin and the Chipmunks would find themselves continuously competing against Brittany and the Chipettes, however regardless of which group ended up winning they would always end up celebrating together.

Despite the two groups friendly rivalry Alvin and Brittany would always have the other's back when the got in trouble, such as when Alvin got on the wrong end of a street gang called the Steam Rollers.

The Chipettes would being to travel with the Chipmunks on their band tours, as an effort to help the girls build their band's popularity. Whenever the two groups preform together Alvin would always be paired up with Brittany. This trend would carry over to other non-singing performances as well, like when they joined Uncle Ben's Celebrity Circus as acrobats. Or when they play the parts of Snow White and Prince Charming during a theatrical production.

The full spectrum of their their relationship is on display during "I Love The Chipmunks Valentine Special". As Saint Valentine's Day approaches Brittany is at home wishing for Alvin to ask her to the Valentine's Dance and together be crowned Valentine King and Queen. However, it is revealed that Alvin despises the very mention of Valentine, as he previously had his heartbroken when he was dumped on Valentine's Day a few years ago, and doesn't want to risk being rejected by Brittany. The following day at school Brittany finds herself surrounded by a group of boys, all wanting to ask her to the dance. Brittany turns them all down as she only has eyes for Alvin, unfortunately she is crushed when the day passes and he hasn't asked her out. Simon and Theodore point-out to Alvin that Brittany obviously wants him to take her to the dance, but Alvin is still unable to get over his nervousness. Alvin tries to resolve this by listening to a self-help tape while he sleeps. Unbeknownst to himself this results in a trance-like state, where he begins moonlighting in the alter-ego Captain Chipmunk. Brittany is sobbing feeling like she has lost her touch. Alvin as Captain Chipmunk rides to the Chipettes's house and serenades Brittany at her window. Brittany swoons, as she is swept off her feet by the mysterious masked swashbuckler. Alvin doesn't remembers anything from that night and the next day at school he feels that he now has the confidence to ask Brittany to the dance. As Alvin approaches Brittany she is telling a group of girls about the dashing Captain Chipmunk. While Alvin does ask Brittany to the dance, she tells him she would love to but he's too late, as she's going with someone else. Alvin is in shock, quickly growing to resent this Captain Chipmunk stranger. That evening Brittany waits for Captain Chipmunk, but he doesn't show. At the pre-dance competition that will determine the next day's Valentine King and Queen both Alvin and Brittany try pulling a scheme to make the other one jealous. They both fail in their attempts however. Later that night, once they've all gone home, Alvin and Brittany both heartbroken declare that they give up on love. Once Alvin falls asleep he once again dons the Captain Chipmunk moniker, but he is woken up when he is splashed by water and realizes that he is Captain Chipmunk. Alvin immediately rides to tell Brittany his secret identity, but when he attempts to she interrupts stating how wonderful Captain Chipmunk is and unintentionally insulting Alvin at the same time. Being petty Alvin plans to embarrass Brittany as Captain Chipmunk at the dance. However, Alvin sees how upset and hurt Brittany is and goes to console her, as himself. The couple start dancing together and are actually crowned King and Queen. At the end of the dance Captain Chipmunk's mask falls out of Alvin's pocket, seeing it Brittany pieces together that Alvin was Captain Chipmunk. Alvin apologizes and says he will make it up to her.

It's at this time that Alvin and Brittany would officially begin their relationship, dating on and off seemingly changing their couple status weekly.

Brittany is first introduced in "The Squeakquel" along with her sisters, when they mail themselves to Jett Records in the hopes of being able to meet Alvin and his brothers. However the Chipettes are conned and manipulated by Ian Hawke for his plans of revenge against the Chipmunks. Due to Ian's influence Brittany grows to have a resentment towards Alvin before she has even met him. Despite this when Brittany and her sisters begin to attend the same high school as the Chipmunks. In a chance encounter in the school halls Alvin and Brittany catch each others eye for the first time, and are immediately smitten (as the song "I Want to Know What Love Is" plays in the background). But when they are interrupted by the bell for class Brittany remembers what Ian had told her about Alvin, saying that Alvin and the Chipmunks can't be trusted. Alvin on the other hand is completely infatuated by the new female chipmunk he just met. Alvin learns of Ian's connection to the Chipettes when they compete against the Chipmunks for the chance to sing in front of the school. Alvin tries to warn Brittany that Ian is a bad person, telling her how Ian had mistreated the Chipmunks in the past and had even locked them in a cage. Brittany doesn't believe Alvin at first, thus sparking a rivalry between the two and their bands. However after a series of events that initially causes more friction between the two Brittany eventually learns the truth and calls Alvin for help. Alvin rides to the rescue on this motorcycle, saving Brittany and her sisters. As they ride off Brittany holds onto Alvin tight. The Chipmunks and Chipettes preform together in order to save the school's music program. At the end of the day Brittany and her sisters move in with Alvin and his brothers, as they now need a new place to live.

In the episode "Big Dreams" from the 1983 series two possible futures were shown. In both futures Alvin and Brittany are shown to be married and have a pair of twin boys, Alvin Jr. and David Jr. Taking the names of their father and adoptive grandfather respectively. They are both shown to be identical to their father when he was their age.

Alvittany is one of the most popular ship amongst the three main pairings for the Chipmunk's fandom, followed by Simonette and Theonor. Many fans enjoy the hot and cold chemistry between Alvin and Brittany with many fanworks revolving around the two competing against each other. While even more focus solely on the romantic aspect of the ship. 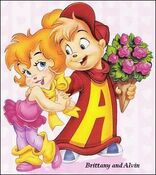 Alvin & Brittany You make me Blush!
Community content is available under CC-BY-SA unless otherwise noted.
Advertisement