Alyadrien is the het ship between Adrien Agreste and Alya Césaire from the Miraculous Ladybug fandom.

Outside their shared friendships with Marinette and Nino, Adrien and Alya know very little about each other, but they do seem to get along with each other quick well during group activists with their friends and fellow classmates. While Adrien knows that Alya is actually Rena Rouge, while Alya is unaware that Adrien is secretly Cat Noir.

Shortly after Alya's twin, little sisters were akumatized into Sapotis, were multiplying by the minuet and needed help in stopping them, Cat Noir is amazed with the new fox-themed heroin that Ladybug recruited to help them. After displaying her fighting skills Cat Noir welcomes Alya, who interduces herself as Rena Rouge, to the team by kissing her hand, along with jovially offering Rena Rouge any superhero advice if needed. When Rena Rouge coyly asks Cat Noir for Ladybug's phone number, he says that he has a good feeling that working with her is going to be a lot of fun.

When animals from the zoo escaped in "Syren", Cat Noir is happy have Rena Rouge helping him and Ladybug again, and as he draws the panthers in Rena Rouge uses the Fox Miraculous' abilities to round them up and after were on their way back to the zoo, Ladybug and Rena Rouge part ways with Cat Noir, who wasn't happy about the idea of him not being allowed to know who Rena Rouge really is. As he believes that he has a right to know, along with the other things that Ladybug refuses to share with him.

Due to the scipe call Adrien was on with Marinette in "Anansi", he became aware of the danger that Alya, Marinette and Nino were in when Ayla's akumatized older sister attacks them as the titled villain and races to their aid as Cat Noir.

In "Reflekdoll", Ayla asks Adrien to help her and the girls with his knowledge on modeling, since he is one and can help Juleka showcase Marinette's designs for her website, Adrien wanted to help but his schedule keeps him from staying out for too long, until he is reminded of the task that his cancelled class gives him a few hours of free time before he suppose to be home. The true reason that Ayla asked Adrien is so he and Marinette can spend some time together. When Juleka showed signs of being way too nervous for the shoot, Ayla suggests that Marinette models them and Adrien should too beside her, since the clothes and jewellery can be for both genders. Ayla made the suggestion, along with a few others, to keep Adrien from leaving too early.

Nino calls Adrien and tells him that Alya is in love with Cat Noir. Adrien denies it, but Nino insists. After Nino says he will find proof and hangs up, Plagg says that his "natural charisma" has contaminated Adrien. Adrien transforms into Cat Noir and goes to visit Alya since he has to be sure that Alya didn't accidentally fall in love with him. Cat Noir confronts Alya about being in love with him, which Nino oversees. Alya tells Cat Noir that she doesn't feel anything and feels love for her boyfriend instead. They hug, which Nino misunderstands and runs away crying.

The next day, Nino shows his evidence to Adrien. Adrien, knowing what actually happened, denies Nino's evidence but can't tell Nino the exact details since he wasn't there. Nino reveals his and Alya's identities as Carapace and Rena Rouge. Despite being shocked by everything, Adrien still denies that there is something between Rena Rouge and Cat Noir. Nino is akumatized into Rocketear.

In "Hack San", Chat Noir and Scarabella (Alya's name with the ladybug's miraculous) worked together. At the beggining Chat Noir couldn't accept that there was another Ladybug, but at the end they could work together and Chat Noir accepted her, becoming fellow heroe parters.

While the two have little interaction with each other outside of school and their occasional shared superhero duties, whenever Ladybug calls upon Rena Rouge to help them, they have been able to do a few fun activities together with Marinette, Nino and the rest of their fellow classmates in the series, and that could be why fans have decided to ship them together. As Rena Rouge and Cat Noir, when they don't know the other's true identity, they are very flirty together, which also fueled some shipping, especially as it could imply Alya has a sort of celebrity crush on Cat Noir.

Since Timetagger reveals that during the time of their adulthood, Ladybug and Cat Noir have assembled a team of Miraculous holders, that might have Alya as one of its members. 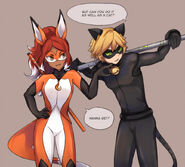