View source
watch 02:56
Doctor Strange in The Multiverse o Madness - The Loop
Do you like this video?
Play Sound
WOAH! THAT'S ONE SMALL SHIP!
• THIS ARTICLE IS A STUB. YOU CAN HELP BY EXPANDING IT •
Stub pages are deleted after 4 months. If not filled out enough, Amaguji will be deleted on
8/10/22

Amaguji is the slash ship between Rantaro Amami and Korekiyo Shinguji from the Danganronpa fandom.

During Chapter 1, Rantaro had a good impression of Korekiyo and considers him interesting, appearing to be the only one who has a positive view on Korekiyo. The two have very little interaction in the canon main plot, with the only one being when Korekiyo asks Rantaro how he wants to accomplish ending the killing game. However, they have more interactions in the bonus content.

During his first Free Time Event with Kaede, if the player chooses to talk about Kiyo, Rantaro tells Kaede that Korekiyo has a strong personality, but if she takes the time to speak with him she'll understand him. In addition, he emphasizes that Korekiyo is a calm person who seems to be a clever type.

The two also have two events together in the game’s bonus mode, Ultimate Talent Development Plan. In these events, they bond over both of them traveling a lot, their knowledge about various cultures and having sisters who are important to them, seemingly seeing each other briefly whenever they're both in the school area and tell each other where they've been lately. However, it's also implied that Korekiyo has taken interest in meeting Rantaro's sisters in order to make them his sister's "friends", meaning murdering them.

In Danganronpa S: Ultimate Summer Camp, when playing as Korekiyo, you can speak to someone “well-traveled”, which is Rantaro. The interaction starts off by with Korekiyo asking Rantaro for some advice with traveling. Rantaro responds by simply telling Korekiyo to respect the local people’s customs, and try to get along with them. He also adds that he’s sure Korekiyo will be fine. Korekiyo finds this rather reassuring, and goes on about how he’s a beginner at international traveling, despite being out of the borders, which leads to Rantaro offering to be his guide for his first trip. Korekiyo is surprised at first, but soon says he is grateful for this.

“Oh yeah, talk about first impressions...But you know, he isn't so hard to understand if you talk to him a little. He's always calm, and he seems pretty sharp. I think he could end up being pretty reliable.”
— Rantaro about Kiyo in the optional dialogue of Kaede and Rantaro's first Free Time Event.

“Kehehe...oddly enough, when I look at you, I sense that we are kindred spirits. You, too, are flitting around with a purpose... That is what I have deduced.”
— Korekiyo about him and Rantaro being similar, in their Friendship Event from the Ultimate Talent Development Plan.

“Kehehe... Is that so? I won't ask in detail, but I shall root for you.”
— Korekiyo after finding out Rantaro has a little sister, in their Friendship Event from the Ultimate Talent Development Plan.

“If you're up for it...I'd love to guide you through your first trip abroad.”
— Rantaro after Korekiyo mentions that he's a beginner at international traveling in Danganronpa S: Ultimate Summer Camp.

The two are shipped together mostly as a result of the interest that Rantaro showed in Korekiyo because of his mysterious ways, and the similarities between them that are pointed out in the Ultimate Talent Development Plan. Despite having different personalities, they share common interests with both of them having sisters who are important to them, traveling a lot, and possessing knowledge about various cultures - Rantaro as a result of traveling and Korekiyo as a result of being an anthropologist. Which is why in many fan arts they are seen traveling together.

Also, Korekiyo's birthday is on July 31, which is known as National Avocado day, and majority of the Danganronpa fandom perceive Rantaro's hair to be like an avocado, and sometimes even calling him an avocado. 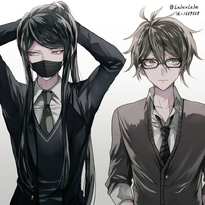 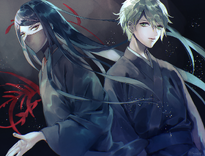 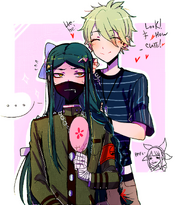 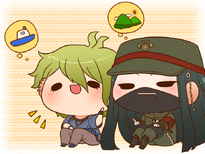 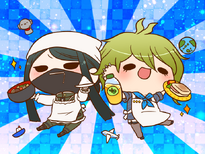 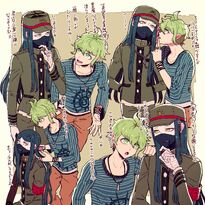