There are no significant interactions between K1-B0 and Rantaro in Danganronpa V3: Killing Harmony. However, it is shown during Rantaro's Free Time Events that he does have some respect for the robot. While talking with Kaede Akamatsu, Rantaro states that he believes K1-B0 is on their side, due to the Three Laws of Robotics. And while talking with Shuichi Saihara, Rantaro smiles awkwardly and retracts a statement that he believes would offend K1-B0.

In Chapter 1, Rantaro's body was discovered. K1-B0 expressed sadness and confusion over Rantaro's death, indicating that he respected him as a person. When first seeing the dead body, K1-B0 was horrified questioning, "Rantaro!? But why...!?". K1-B0 was also nervous because although he wanted to help find the culprit of Rantaro, he doesn't read any detective mangas. In the end, K1-B0 decides that they should all just work together to help find Rantaro's murderer.

While not canon, in the official demo version of the game, both K1-B0 and Rantaro are chosen to sit out of the Class Trial. Due to there not being enough podiums for all eighteen participants. K1-B0 protests to his exclusion. Maki Harukawa asks him if he can prove that he's not the Blackened. Rantaro defends K1-B0, and claims that the two of them were together the entire time.

While the two have some similarities, they also have many differences that complement each other. K1-B0 is polite and serious but can also be socially awkward while Rantaro is carefree and relaxed. K1-B0 is very confident in himself, while Rantaro at times seems to be unsure of himself. It’s their personalities slightly contrasting that have people shipping them together.

Even though the characters have almost no interactions in canon, the ship is actually quite popular in the fandom. Most fanfics portray K1-B0 as getting flustered around Rantaro while the latter is oblivious. Others also think due to Rantaro being very carefree, calm and cool-headed whilst K1-B0 being socially awkward and is quite insecure. Rantaro could help K1-B0 to doubt himself less. Some also like to believe that in the demo version where K1-B0 and Rantaro sit out of the Class Trial, they were spending time with one another. 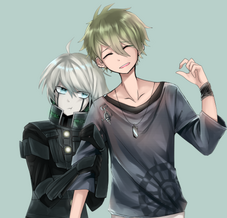 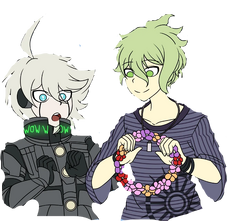