Amasai is the slash ship between Rantaro Amami and Shuichi Saihara in the Danganronpa fandom.

When Rantaro met Kaede Akamatsu and Shuichi, Shuichi seemed confused how Rantaro mentioned about everyone gathering and getting amnesia. He thinks he is some way mysterious and has some clues about his backstory. Later, Shuichi became quite hostile towards Rantaro later in Chapter 1 based on his suspicion as being the mastermind and forgetting his talent. It's also seen that Rantaro becomes more comfortable with Shuichi, as when Shuichi questions him he jokes about being nervous about being questioned by the Ultimate Detective, and later laughs at off as him teasing Shuichi. This shows his suspicion of Shuichi likely subsided as he began to believe and trust in Shuichi's Ultimate, as well as possibly begin to realize how resourceful Shuichi may be in the future.

In the free time events between the two It's seen that they develop a mutual trusting bond together. Shuichi is seen to worry about Rantaro and his past, since Rantaro is secretive about what happened to him, and mentions having gotten in dangerous life threatening situations before. At the beginning of their FTE's Shuichi merely questions Rantaro out of curiosity but that's seen to quickly develop into more worry than a simple want to know. In their fourth FTE Shuichi expresses his desire to know what Rantaro's past is, and not wanting Rantaro to leave abruptly and leave him in the dark. When Rantaro says he wants so be alone, Shuichi responds by saying "I can't leave you alone, Rantaro." Rantaro is surprised by the remark and gets flustered, telling Shuichi to 'save that line for the ladies', Shuichi apologizes, but neither of the two are seen to be uncomfortable, only primarily embarrassed. Later in the same FTE Rantaro explains his past, and expects Shuichi to tell him to give up on his journey for his sisters, as he mentions everyone in the past has told him to do so. Shuichi instead responds by showing a certain admiration for Rantaro's devotion, and even refers to him as 'The Ultimate Big Brother', this catches Rantaro by surprise, as no one has told him this before. It is later revealed Shuichi was the first one to understand and believe in him in the fifth FTE. In the fifth FTE Rantaro asks Shuichi to help him find his sisters, and possibly spend the rest of his life doing so. He asks Shuichi to travel the world with him as the Ultimate Detective to find his missing family. Shuichi is taken aback at the request, reasonably so considering Rantaro asked him to possibly spend the rest of his life with him after they escape Ultimate Academy For Gifted Juveniles, but he accepts without hesitation. Shuichi's internal monologue even reads that he trusts Rantaro, and that he wants to keep the bond he's forged with Rantaro forever. Sadly due to Rantaro's death in chapter one his FTE's are not playable until the end in the extra game modes. It should be noted that these FTE's are still a canonical representation of Shuichi and Rantaro's character relationship if Rantaro had not died, so they should be treated with the same amount of validity as any other character.

In the love hotel event, Rantaro has the role of a private tutor or a teacher of Shuichi. As the situation reflects the relationship between Rantaro and his younger siblings, he treats Shuichi like a child, which makes him a bit uncomfortable. Because of this, Rantaro assumed that Shuichi dislikes him, but Shuichi denies it. Rantaro is relieved that Shuichi doesn't despise him, but he states that he no longer would be his teacher, as he thinks he made Shuichi uneasy and he could be in danger with him. He wishes to protect Shuichi, so he wouldn't lose another person that is very important to him. He mentions the possibility of himself dying and while he claims he was joking, Shuichi doesn't believe him. Shuichi tells Rantaro he would rather hear his story even if it is a risk rather than leave Rantaro to deal with it alone. In the end of the event, Rantaro feels very glad, trusting Shuichi even more and waiting for the time to tell him his story.

The ship sailed as a result of Rantaro reminding a lot of fans of Nagito and Shuichi being the main protagonist, which resulted in some fans picturing them as having interactions similar to Komahina. As well as many comparing Rantaro's "I would circle the globe with you as many times as it takes, even if it was for the rest of my life." with Nagito's "Please remember, I am truly inlove with the hope that sleeps inside you." 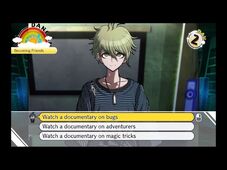