Amasaioumatsu is the poly ship between Shuichi Saihara, Kokichi Oma, Kaede Akamatsu and Rantaro Amami from the Danganronpa fandom.

All of them are friends and students of The Ultimate Academy for Gifted Juveniles. They are also participants in the Danganronpa V3: Killing Harmony's Killing School Semester. Unfortunately, only one of them survived the killing nightmare at the end of the game. All of them don’t really have many interactions together as a team but they see each other as friends and classmates during their conversations.

Kaede first met Shuichi in a specific classroom and later on met Rantaro then Kokichi when they were exploring around the academy. Because of her optimism personality, she was in good terms with everyone. Well, she did find Kokichi a little mysterious because of his carefree and mischievous personality. Later on on the game, she and Shuichi decided to make a trap to reveal the mastermind’s identity so they can all escape. Unfortunately, their plan failed and saw Rantaro lying on the floor dead right after their plan finished. During the first class trial, Kaede became clean and told everyone that she was Rantaro’s killer. Shuichi was devastated when he knew that she was the killer and knew she was going to be executed. Kokichi on the other was sad as well, although some of his classmates thought that he was just faking his tears or it’s just sarcasm. Kaede had a chance to farewell her goodbyes to all of her classmates and apologized for killing Rantaro in the process. It was later revealed at the end of the game that Tsumugi Shirogane, is actually the real killer of Rantaro and framed Kaede to avoid getting executed.

Shuichi was Kaede’s best friend and partner during the first chapter. He later on met Rantaro in the hallway and thought that he is one mysterious man due for mentioning amnesia and got puzzled with Rantaro’s theory. He just let this situation slide and still saw him as a friend. Kaede and Shuichi grew close during their four days in the game and was implied that he might have feelings for her. Everything went downhill when he learned that Kaede was Rantaro’s killer and had to bid farewell to his best friend. He later on befriended Kokichi after Kaede’s passing and both formed a very unique relationship together, especially during the class trials.

Kokichi didn’t really have any intimate relationship with the three due for his distant personality or rather spending his time alone. But it is said that he and Rantaro grew close during the first chapter and even cried when he saw Rantaro’s dead body. Kokichi also got the chance to spend time with Kaede during the Free Time Events and considered her as one of his friends later on. He too also cried when he learned that Kaede was Rantaro’s killer and also had to bid farewell but some of his classmates suspected that he was just faking his tears and cries. After the events of chapter one, Kokichi had a “close” relationship with Shuichi and even saw him as his rival or an interesting character for the class trials. He later on developed feelings for Shuichi during the Free Time Events.

Being the same with Kaede, Rantaro was in good terms with the three because of his calm personality although he didn’t get enough interactions with them because of his early death in the game. But he did got close with Kaede during the Free Time Events and was implied to have a close relationship with Kokichi off-screen. For Shuichi, he formed a mutual-trusting relationship with him and both of them also decided to travel together to find Rantaro’s lost sisters if they make it out alive.

Amasaioumatsu isn’t really that popular due for Kaede and Rantaro’s early deaths in the game. Although, some fans ship them because of the famous “Opposite Attract” trope or because of their complex aesthetics together. Some would even see them as the Double Date 2.0, which is a popular polyship in the fandom. This ship also became a known one for the shippers who are confused whether to ship Saimatsu, Saiouma, Amasai, Amamatsu, Oumatsu or even Oumami. 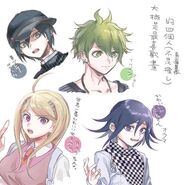