Friends/Classmates; Rantaro and Korekiyo are dead
One-sided attraction for Shuichi on Korekiyo's side (Love Suite)

Amashinsai is the poly ship between Rantaro Amami, Korekiyo Shinguji and Shuichi Saihara from the Danganronpa fandom.

Shuichi met Rantaro together with Kaede Akamatsu. At first he was sort of hositle towards Rantaro since he suspected Rantaro to be the mastermind. Despite that they seem to share a bond of trust in Free Time Events seen in the bonus mode, Love Across The Universe. In their Love Suite event Rantaro acts as Shuichi's tutor, which seems to make Shuichi uncomfortable due to Rantaro treating him like a child at this time. Also in the Love Suite event, Rantaro was scared thinking that Shuichi didn't like him, which Shuichi denies.

Korekiyo and Rantaro don't share many interactions. In the canon the only time they interact is when Korekiyo asks Rantaro how he intends to end the killing game. Despite this, they share some interactions on the Ultimate Talent Development Plan, where they appear to be good friends, both comment on their travels and Korekiyo even says that when he looks at Rantaro, he feels like they are kindred spirits.

Amashinsai is one of the most popular polyships of the danganronpa fandom, but in general they can be considered a rare pair. They are usually shipped by people who cannot choose between the three ships. Rival ships include Amashinnaga and Oumamasai. Although there are few stories on AO3, there are many posts on Instagram. Fans like to make art from them traveling places, as both Korekiyo and Rantaro used to travel the world, and in Rantaro and korekiyo Free Time Events, Korekiyo promises Shuichi that he would travel with him around the world to show him the beauty of humanity, and Shuichi promises that he would travel with Rantaro to help find Rantaro's sisters. 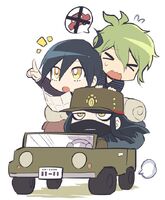 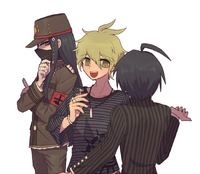