Shipping Wiki
Register
Don't have an account?
Sign In
Advertisement
in: Ships, Ships/Femslash, The Owl House/Ships,
and 5 more

Amillow is the femslash ship between Willow Park and Amity Blight from The Owl House fandom.

Before the beginning of the series, Amity and Willow had been best friends, forming many shared memories together. However, things drastically changed once Amity began getting her magical powers, while Willow's came more slowly. Amity's parents, believing Willow was too magically weak to associate with the Blight family, threatened to have her kept out of Hexside unless Amity stopped spending time with her. Nervous to cut ties with Willow, Amity ended up parroting her parents' claims of Willow's weakness directly to her, ending their friendship on a sour note.

By the time of their first appearances in "I Was a Teenage Abomination", Amity has become a bully towards Willow, continuing to taunt her over her apparent magical weakness. In the episode, Amity crudely insults Willow for her failure with abomination magic, telling her, "This is why people call you Half‐a‐Witch Willow." Worried about her grades and frustrated with Amity's bullying, Willow allows Luz to pretend to be her abomination in class. This plan succeeds, with Willow getting a passing grade, and even taking the "top student" title from Amity. Angry and spiteful at losing her top student badge to Willow, Amity spends the rest of the day spying on her to expose her cheating.

In "Hooty's Moving Hassle", Amity invites everyone at school except Willow to a moonlight conjuring at her house. When Boscha mocks her for not being invited, Amity tells her to leave Willow alone, since "it's not her fault she was born without talent", a comment which greatly angers Willow. After animating the Owl House at her own conjuring with Luz and Gus, Willow resolves to bring the house to Blight Manor, wanting to prove her worth to Amity.

In "Understanding Willow", Willow expresses disgust at a memory-photo showing her former friendship with Amity, turning away the idea of becoming friends again. Amity spots the photo between classes and, not wanting anyone to know about her friendship with Willow, burns it. However, the fire spreads and Amity ends up accidentally burning the rest of Willow's memory-photos, damaging Willow's mind, and causing her to feel incredible guilt. While in Willow's mind to fix her damaged memories, Amity expresses sentimentality and nostalgia for her shared childhood memories with Willow, even though their friendship had long ended. However, the inner mental version of Willow is spiteful towards Amity, continuing to destroy their shared memories even after she and Luz has already fixed them. This continues until Amity finally reveals that her parents forced her to cut ties with Willow. Amity tells Willow that she was never too weak to be her friend, and that she was too weak to be hers. While Amity knows she can't take back all the mean things she's said and done, she promises to never let anyone pick on her again. The inner Willow calms down, accepting Amity's apology. In the real world, Willow says that she and Amity still aren't friends again, but that Amity's apology is "a start".

In "Wing it like Witches", Willow experiences a major boost in confidence as a result of making up with Amity. Meanwhile, Amity has disavowed Boscha for her bullying of Willow, even telling Boscha to "grow up" in response to her insulting Willow. Later on, when Willow backs down from a grudgby match against Boscha, Amity is the one who successfully convinces Willow to return. Amity joins Willow's grudgby team for the match, and coldly tells Boscha that she's "made [her social life] better" by being Willow's friend. At the end of the episode, Amity and Willow are seen happily spending time together, alongside Luz and Gus, at the Owl House.

Amillow first began spreading through The Owl House fandom after the episode "Hooty's Moving Hassle", where Willow revealed that she and Amity had been childhood friends. Even then, however, Amillow is not a very popular ship, mainly due to Amity canonically having a crush on Luz Noceda. 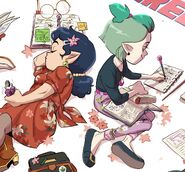 Willumity refers to the ship between Luz Noceda, Amity Blight, and Willow Park