Shipping Wiki
Register
Don't have an account?
Sign In
Advertisement
in: Ships, Ships/Friendships, The Owl House/Ships,
and 5 more

• Did You Actually Believe? - Hunter begs Amity to untie him, she releases him from the abomination chains but he only escapes.
• Not So Different
• Hair Contrast Duo

“You know, you were right. We do have a lot in common. I grew up thinking everything was an opportunity to justify existing, but there are people out there who won't make you feel worthless, you just... have to let yourself meet them”
— Amity trying to cheer up Hunter.

Aminter is the friendship between Amity Blight and Hunter from The Owl House fandom.

Eda, King and Amity went to the Eclipse Lake to get the Titan’s Blood. Hunter was going too, since Kikimora was going to get some of the Titan’s Blood too and he wanted to get there first. He was disguised as a Coven Scout. Kikimora spots him talking to his palisman, so she shots him with her Abomaton. As he recovers, he spots Amity alongside Eda and King. He decides to follow them in the hopes that they will lead him to the blood, but his palisman suddenly drags him by his hair, causing him to lose his balance and fall forward, exposing his whereabouts to Amity, Eda and King. Amity intends to subdue him, thinking he is a Coven Scout, but Hunter surrenders before she can do that. Eda recognizes his voice, and Amity restrains him before he can escape. With Hunter in tow, Amity, Eda and King find another way into the mine tunnels, by busting through a wall of ice.

After trekking through the mineshafts for a while, they made it to the passage leading to Eclipse Lake, only to discover Kikimora and her troops are blocking the way. Eda and King go off to create a distraction while Amity and Hunter hide. Amity then receives another text from Luz, but once again can't understand it. Hunter went with her and looked at the message and interpreted it as a message telling Amity not to fail or they're over. She replied that Luz would never say something like that, declaring herself an awesome girlfriend, but Hunter asked her if Luz has actually said that. Hunter replies that both of them have so much in common, which Amity evades him.

Amity, Hunter, Eda and King make it to where the Fool's Blood is located. Eda and King think it is the Titan's Blood and go to mine it. When Hunter warns them not to touch it, Amity didn’t went to grab some, but Eda and King ignore him causing the ground beneath their feet to collapse, and Eda and King fall down a bottomless pit. Kikimora was coming, and Hunter wanting not to get caught, he pleads for Amity to free him, which she reluctantly does. The moment he is free, Hunter knocks her down and heads for Eclipse Lake on a minecart, just as Kikimora and her troops arrive and capture Amity.

After escaping her and passing through some problems, Amity and King discover Eclipse Lake has been drained, and there is not a single drop of Titan's Blood anywhere. They find Hunter desperately digging through the soil, prompting Amity to ask what he's doing. He explains that Belos needs the Titan's Blood to make a new portal key, making Amity realize the portal key contains Titan's Blood. Hunter further explains that he cannot go back empty-handed, so now he's digging his own grave.

Amity walks up to Hunter, who is lying face down in the dirt, and tells him that he was right about them having so much in common. She grew up thinking everything was an opportunity to justify existing. But now, she has seen there are people out there who will not make oneself feel worthless, and all he has to do is let himself meet them. Amity stretches her hand out to Hunter, but when he sees the key around her neck, he jumps at it. The two of them engage in an epic fight for the key, with King helping Amity and Hunter's palisman providing him with magic, but they soon reach a standstill. Hunter then admits that Amity might win if they continue, but warns her that the Emperor's Coven knows where they live, threatening to harm Luz if Amity does not surrender the key. She then cracks the key in her hand, but reluctantly hands it over. Hunter then says he genuinely appreciates her helping him, before halfheartedly flying off on his palisman.

After Hunter passed out and wakes up in a room with Amity and other students from Hexside, he thinks it's an illusion and tries to escape, but he was still weak to even stand up, so he stays there. Amity was one of the few ones who recognized him, and later supported him since most of the witches thought he was lying to them. She also stayed near him and fought for Hexside to save them from the massive illusion. At the end when Hunter was going to tell everything about the truth of Emperor Belos, Amity was one of the witches who stayed to listen to him.

“We have a lot in common, Blight. We're both trying to show what we can bring to the table. And we can't fail, because there's nothing worse than disappointing someone who thinks you're special”
— Hunter to Amity.

“Listen, you're strong, and I'm tired. If this continues, you'll probably escape. But here's the thing, we know where to find you, and your human. So just... hand over the key”
— Hunter to Amity.

Aminter sailed on the episode “Eclipse Lake” since it’s the only episode these two have been on screen together. Even if both of them didn’t get along well during the episode, this ship became fairly popular in the fandom, but it’s mostly well-looked and accepted as both shipped as friends, since Amity is confirmed to be a lesbian, and she’s already in a relationship with Luz. There many fanarts of both of them spending time in the Owl House, normally alongside Luz, Gus and Willow, and sometimes including King, Eda and Hooty.

Both of them have always been trying their bests to prove themselves: as Hunter tries to prove to Belos he can be an excellent Golden Guard, and Amity at the past tried to prove herself to her parents that she was a formidable, but now she wants to prove she’s a good friend to Gus and Willow and wants to be an amazing girlfriend for Luz. The difference is that both of them did it to make others proud without thinking of their happiness or themselves, but Amity got to confront her parents and now she does her own purposes. Fandom thinks Hunter he could start to do what he really wants to do and not what Belos asks for him, so he could finally confront Belos as Amity confronted her parents.

As it was already said, Amity is confirmed to be a lesbian, but many fans started to ship them romantically causing much problems within the fandom, starting ship war from a group of Lumity shippers as they began sending hate for shipping both of them. Even though the ship hasn’t had much of a romantic or a friendship advance, as both of them ended up in bad terms, some fans at least hope they can get along and still hang out in the Owl House with the rest of the gang. 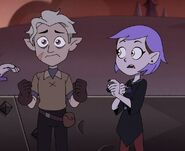 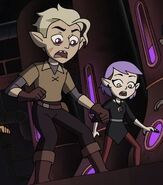 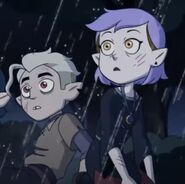 Art by Art by King Pecora 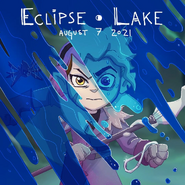