Friends, Both are dead

Amojo is the het ship between Rantaro Amami and Kirumi Tojo from the Danganronpa fandom.

Although both characters take part in the killing game, Rantaro and Kirumi don't have any in-game interactions.

The only interactions they share is in the Daganronpa V3 Development Plan, where Kirumi offers to repair the sleeve on Rantaro's shirt. Rantaro states Kirumi's offer made him feel nostalgic, for she reminded him of a maid he knew a long time ago. He also stated his maid was also like a second mother to him, but assured Kirumi he wasn't comparing the two. Kirumi understood and found his story to be heartwarming.

One chapter of the non-canon Danganronpa V3 Anthology manga, revolves around the two. Rantaro asks for Kirumi's help in order to help him remember his talent by buying items at the Monomono machine, and Kirumi stating it was fun. Rantaro wins "catsup" from the monomono machine and says his maid used to write affectionate messages on him omelettes, though comments Kirumi wouldn't do that because she's more cynical. The Ultimate Maid objects, saying she'll do it if Rantaro asks her and claims she can be cute. Rantaro smiles and states there are interesting parts of Kirumi and that she's not a bad person after all. Kirumi replies deep down she doesn't think Rantaro is a bad person either and that she has served a lot of people so she can tell, whether they were good or bad people, she'd serve anyone. Though her comment ruined their moment, Rantaro thanks her. In the end of the comic shows Kirumi serving Rantaro omurice. 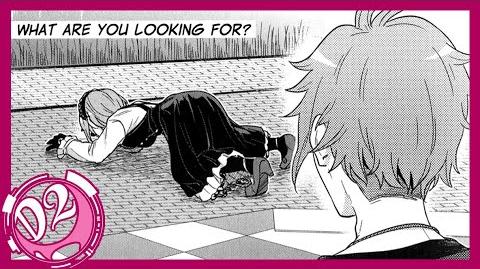 What Are You Looking For? Danganronpa V3 Anthology Dub

Retrieved from "https://shipping.fandom.com/wiki/Amojo?oldid=204841"
Community content is available under CC-BY-SA unless otherwise noted.