Amuma is the het ship between Miu Iruma and Rantaro Amami from the Danganronpa fandom.

The two barely interact in canon due to Rantaro's early death. Rantaro is a bit overwhelmed by Miu's foul mouth, but he doesn't seem to dislike her as much as some other students do.

When Kaede and Rantaro talk about some of their more unique classmates during his Free Time Events, Rantaro mentions that Miu's talent is beyond understanding for ordinary people like them, and he mentions that he understands her thought process, though and that she likes to be the one on top. Kaede gets confused by the wording of this phrase, and Rantaro laughs a little awkwardly, saying that he was just trying to make a joke.

The ship sailed because of their opposite personalities. Miu is an incredibly outspoken and vulgar-speaking person who often insults her peers, while Rantaro keeps to himself and never speaks ill of his classmates, rather referring to them as "unique". Miu regularly makes sexual jokes, which Rantaro either doesn't understand or just doesn't react to, unlike the others. He comes off as having little knowledge nor interest in romantic related things.

Due to their heavily contrasting stances on romance, many believe they wouldn't be good together, especially with the common headcanon that Rantaro is aromantic asexual and/or Miu is hypersexual. However, this just further intrigues some fans as they are so different. Some believe that Rantaro may just be inexperienced and the fact that he doesn't show any interest in canon doesn't matter. Miu and Rantaro's opposing qualities are why some believe they would work because there are so many spaces where one can fill in the other's weak spots or such.

In addition to their contrasting personalities, their color schemes do as well. Miu wears light colors while Rantaro wears dark colors. Miu's light, blonde hair is distinctive from Rantaro's green hair. Rantaro's clothing seems to appear looser and relaxed like his attitude, while Miu's outfit includes belts, buckles, and suspenders, presumably to keep things tighter and together. Like with their personalities, the great differences between them are what drew fans to the ship.

Amuma is considered a rare pair due to the two's limited interactions. As it is an uncommon ship, there are many ships for Rantaro and Miu that are more popular than it. Its rival ships include Amamatsu, Amasai, Oumami, Irumatsu, and Kiiruma. 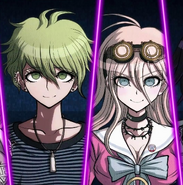 Irumamatsu refers to the ship between the two and Kaede Akamatsu