Anahardt is the het ship between Ana and Reinhardt from the Overwatch fandom.

In an effort to combat the continuing threat of the rebelling Omnic armies, the United Nations greenlit the creation of the strike team later known as Overwatch, comprising of handpicked specialists in combating the robotic menace. Two of the initial members chosen were Ana Amari - a skilled sniper from the Egyptian military - and Reinhardt Wilhelm - a member of the German "knight" organization known as the Crusaders. For the next several years they, along with the other hand picked specialists, would fight the rogue Omnics to try and maintain peace. Ultimately, Overwatch would prevail in ending the crisis and would go on to expand in scale to become a peace-keeping organization. With the increase in scale, Ana would become second-in-command to Commander Jack Morrison and Reinhardt would become one of the organization's field agents.

One operation that Ana and Reinhardt would undertake together either during the crisis or shortly after it was what would become known as Operation: White Dome, where a pocket of Omnic rebels was discovered in Istanbul. Ana would co-lead a group that included Reinhardt to deal with the rebels. Unfortunately, the group would be ambushed and be forced to deal with the rebel's entrenched forces. Ana and Reinhardt's team would prevail, but Reinhardt would walk out injured thanks to protecting fellow team member Torbjörn Lindholm, who had lost his arm among other injuries. This action led to Ana offering a personal recommendation for Reinhardt to be commemorated for his bravery, a commendation that Reinhardt would receive.

Another operation that Ana and Reinhardt would be involved in was the quelling of an uprising of the Omnic group Null Sector in the King's Row district of London. Disregarding an order for Overwatch to not participate, Reinhardt would join Torbjörn, combat medic Angela Ziegler, and recruit Lena Oxton in an operation to stop Null Sector while Ana guided them through their objectives alongside Morrison and Blackwatch leader Gabriel Reyes. Near the start of the operation, Ana warns Reinhardt to not charge in ahead, which the knight acknowledges. Although the uprising would be quelled, it would one of the last missions Ana and Reinhardt would cooperate in together, as the latter would soon be forced into retirement due to his age while the former would continue working with Overwatch until her near death encounter with the Talon agent Widowmaker.

“Huh! Someday Reinhardt, but not today.”
— Ana upon eliminating an Enemy Reinhardt

“Settle down old man.”
— Ana upon eliminating an Enemy Reinhardt

“Reinhardt!”
— Ana after an ally Reinhardt is eliminated

“Ana would be proud!”
— Reinhardt to Pharah

Reinhardt – “Ana! How could this be? I thought you were dead…”
Ana – “I’m sorry Reinhardt. After everything that happened, I need time.”
— Interactions

Ana – “This is just like old time Reinhardt.”
Reinhardt – “We old timers must stick together. Teach these kids a thing or two. Hehahaha.”
— Interactions

Captain Amari – “And Reinhardt, don't charge in there on your own.”
Reinhardt – “Wouldn't dream of it, captain.”
— Exiting Metro

Fans ship the two based on their shared dialogue interactions, especially when it seems that the two are flirting. Their similar personalities also work well with one another. Fics depict the two after Reinhardt finds out Ana is alive, but pre-fall of Overwatch fics are also popular.

Early on in the Overwatch fandom, many fans thought that Reinhardt would be revealed to be Pharah's father. This theory was debunked, and it turned out that Ana married a man named Sam. Fans of Reinhardt and Ana will still have them paired together, and normally forget that Sam is even a thing.

On AO3, Anahardt is the most written ship for both characters, but only the eleventh most written relationship in the Overwatch tag. 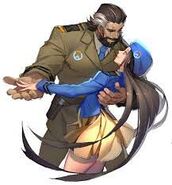