Anhane is the femslash ship between An Shiraishi and Kohane Azusawa from the Project SEKAI fandom.

An was a part of the music scene long before Kohane. Ever since witnessing an event her father performed at - RAD WEEKEND - as a child, her goal has been to create an event even greater than that, despite the doubt of fellow musicians. She has been a solo artist for the majority of those days, despite expressing interest in having a partner, because she would always think "this person isn't the one." Personality wise, An is an outgoing, sociable, hardworking and passionate girl who won't stop until her goal is achieved.

On the other hand, Kohane initially comes off as somewhat meek and, as Akito would go on to describe her, "half-hearted." However, this changes after Kohane discovers her passion for music, leading her to become a reliable girl who works hard to overcome her shortcomings. She's willing to take chances despite her nervous demeanor and proves to be a valuable part of the group, especially to An, whom she motivates.

The two of them officially meet when Kohane stumbles into the live café and bar An's father owns after getting lost. Her heart pounds at hearing An sing, and, overwhelmed by her feelings, she bolts when An attempts to talk to her. Kohane visits the shop again a few days later, and this time sings for An at her request. An is taken aback by her voice and can't help but join in. After their duet ends, she enthusiastically asks Kohane to team up with her, saying that they could put on the greatest show ever if they were together. Although initially surprised by the prospect, Kohane agrees, and the two of them begin practicing and performing together.

During their first event, their sound cuts out as a result of intentional sabotage by another musician, and An tries to cheer up Kohane. They get each other back into the groove of performing even after that disastrous performance and support each other. This way, their next event is much better, shocking even Akito, who admits Kohane isn't half-hearted as he'd thought. Another bump in their relationship happens during the "Singing in Sync" event when An realizes she's been overprotective of Kohane and hasn't been putting enough faith in her. This cumulates in an emotional apology scene where An tells Kohane she still wants to sing with her, Kohane accepting, and the two of them hugging.

An's greatest passion is music, and to find someone to share that with inspires her and staves away the inevitable loneliness of a dedication as singular as hers. An is even seen to sometimes break character for Kohane, such as during Singing in Sync where she sacrifices her professional demeanor on stage worrying about her partner. Kohane has always wanted to be a brave person, and being with An brings that bravery out in her. An is always there for her, giving her affirmation and supporting her in her entrance to the music scene. Their bond even helps Kohane discover her true feelings and passion. By being together, they highlight each other's greatest strengths, making their newly minted team a considerable opponent to Akito and Toya, who have been making music together for years.

Their partnership is later on tested again after the Awakening Beat event, where An starts feeling uneasy about Kohane's newfound confidence and singing abilities, fearing that she will be left behind and all alone once again.

Kohane – “Seeing An-chan makes me want to do better.”
MEIKO – “Oh? Why?”
Kohane – “Because she's my partner. I owe her for getting me into singing and encouraging me to be brave. She has this dream she's chasing relentlessly, to surpass RAD WEEKEND. She's amazing in so many ways that I'm not. But at least, I'd like to make her proud to have me as a partner.”
MEIKO – “Hehe. You like her so much, don't you?”
— Kohane and MEIKO in "Warm Gaze" first side story

“You're an awesome singer, Kohane. I want to keep performing with you and realize that dream. I believe all of this, even now. Especially now! When you weren't sure about something, you leaned on me and asked me for advice... That made me really happy. And I didn't want that to end... But it ended with yesterday happening... I failed you as your partner. I should've believed in you more and helped you grow... But... I want us to be together, Kohane! I want us to perform together! I want to be your partner! I want you to believe in us too! Because I really believe in you, Kohane! So please, will you sing with me on that stage again?”
— An in Singing in Sync Chapter 8 - Becoming Teammates

“You really are amazing, Kohane... Once you put your mind to something, you stay completely dedicated to it. I think that's really amazing!”
— An in "Intimate Feeling" first side story

“(But why...? Kohane figured out how to sing way better than she usually does, and I was so happy to see it happen... It was the most exciting moment we've had so far singing together... But... Why...? Why do I have this knot in my chest? I don't know what this feeling is... I'm happy, more than happy that Kohane's finally smiling again. There's absolutely no denying how I feel about what happened, so...)”
— An in Awakening Beat Chapter 8 - Next to Everyone 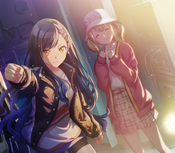 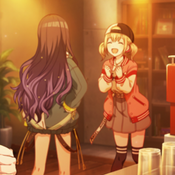