Married; both are alive (Pre-Timeskip)
Both are deceased (Post-Timeskip)

“If you're hungry, eat this. This plate is just for you, so eat from it whenever you want. But stop stealing food!”
— Aoi to Inosuke after he tried to steal food

AoIno is the het ship between Inosuke Hashibira and Aoi Kanzaki from the Demon Slayer fandom.

Inosuke and Aoi first met when Tanjiro, Zenitsu, Nezuko, and Inosuke came to the Butterfly Estate due to injuries after the fight on Mount Natagumo. They train together for a period of time before both Inosuke and Zenitsu decide to quit. Following the battle at the Red-Light District (Red-Light District/Entertainment District Arc), Aoi cries as she tells awakened Tanjiro that Inosuke was in terrible condition because Gyutaro's poison caused him to bleed excessively. Inosuke appears on the ceiling over Tanjiro and lands on his bed, gloating about his strength. Inosuke is then stunned when Kiyo tells him is like a Honey Badger who has hide like armor and is immune to poison. Aoi grabs onto Inosuke, telling him to get off Tanjiro. Inosuke is suddenly convinced he is invincible and Gotou tells him he is just a moron. He goes to attack Gotou, but Aoi grabs onto his waist, calling him a 'moron' and an 'ass'. She proceeds to tell him that while he has poison resistance, he also resists the medicine she gives him. She remarks on his terrible memory, saying he forgets everything. They bicker back and forth, Inosuke calling her a 'pipsqueak', and Aoi retaliating, saying they're almost the same height. She yells at him to be quiet so Tanjiro can rest.

One potential moment in the later chapters is when Aoi was scolding Inosuke for stealing food and giving him his own tray of food so he doesn't steal anymore. Inosuke smiled with a slight blush on his face, expressing gratitude for Aoi's kindness.

In chapter 205, Aoba Hashibira makes an appearance. He is Inosuke and Aoi's descendant, and he very much takes after them. Like Aoi, he has black hair without faded blue tips, works in a field of science, and his name Aoba is similar to Aoi in romaji spelling. Like Inosuke, Aoba has dark bangs, a softer complexion, and bright green eyes. At the end of the chapter, there is a picture of Inosuke giving acorns to Aoi while she smiles. It is confirmed in the Volume 23 extras that Inosuke and Aoi did eventually end up together and that they have two great-grandsons, one of which is Aoba.

The ship most likely started when Inosuke showed no restraint against her in the full-body training and when Aoi was weeping while explaining Inosuke's injuries after the fight against Upper Moon 6. They do not seem to have significant interactions throughout the series, but their similar personalities are what dragged the fandom into shipping them. The banter that comes from their canon interactions carried over into Fanon. This ship could possibly start from Aoi when she decides to buy Inosuke rice duplings after Inosuke heard that Haganezuka is eating some, in. the first episode of the Entertainment District Arc.

Their dynamic is such that while Inosuke is relatively insensitive, Aoi is able to put up with him and his shenanigans, not afraid to give him a piece of her mind as well. Inosuke is also prone to danger and risk-taking while Aoi is a medic and acts as a den-mother. He lacks mother-like care, so Aoi worrying over and caring for him is something he might pay close attention to. The fandom commonly portrays Inosuke as liking Aoi's concern deep down, enjoying that someone actually does care/worry about him other than Tanjiro and Zenitsu.

Another common Fanon depiction is Inosuke being sweet and kind in his own brash way towards Aoi, whom he views as strong and tough. Though he might not be the best at expressing his feelings, he would be a good and protective partner to her. She would understand his displays of affection and particular mannerisms, and have no problem putting up with them. Additionally, Aoi is a fantastic cook, and Inosuke loves to eat. Fanon loves to interpret this dynamic as Inosuke pining after her delicious food (chapter 204 reflects this).

Though it is not a high-ranking ship in terms of fanfiction, the fandom's love for them shines through fan art, and it is one of the most well-known Inosuke ships. 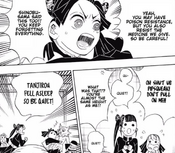 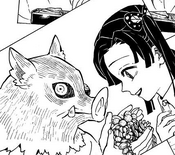 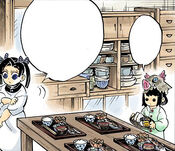 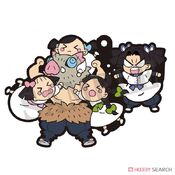 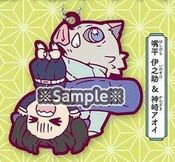 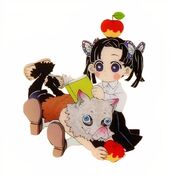