Aoi x Donuts is the cargo ship between Aoi Asahina and donuts from the Danganronpa fandom.

Donuts are canonically Aoi's favorite type of food. She mentions them multiple times throughout the series. Her profile also states donuts as the thing she likes. Even her promotional sprite acknowledges this, with donuts appearing around her.

Chapter 3 reveals Aoi tends to eat donuts especially when she's feeling depressed. With the most recent deaths getting to her, Asahina broke the group's promise not to hang out at night time, and went to get some donuts for herself to cheer herself up.

In the Epilogue, Hina says the first thing she plans to do after leaving Hope's Peak Academy is to get some donuts. Yasuhiro Hagakure reminds her that there might not be any donut shops or donuts in the post-apocalyptic world. However, the girl doesn't lose her cheerfullness, and claims that in such case she'll start by getting some flour and making donuts herself, or growing wheat in case there's also no flour anymore. An alternate version of the ending, Danganronpa Another End, where everyone survives, adds to this, revealing she plans to open her own donut shop named "Asahina Donuts."

Throughout the Final Killing Game in the Future Arc of Danganronpa 3: The End of Hope's Peak Academy, Aoi attempts to cheer up her friends a few times by telling them that once the killing game is over, they'll go eat donuts together.

“I know I shouldn't cry... But... I've had enough. I can't take it anymore. Getting out of here...anytime soon... ... It's...impossible. I can't let myself think about...how much I want to get out of here. If I keep thinking like that, I might decide to... ....Donuts. I need to eat some donuts...! That'll cheer me up! Glazed donuts, twisty donuts, jelly donuts, cream-filled, donut holes, malasadas...! O god of donuts! I'm praying for a wonderful encounter!”
— Aoi at the start of Chapter 3, after the recent deaths got to her.

“Please, forgive me for breaking the nighttime rule... But right now, for me...donuts are absolutely necessary...!”
— Aoi slightly later in Chapter 3.

Aoi – “Well *my* first stop is gonna be the closest donut shop! I can figure out the rest from there!”
Yasuhiro – “And what're you gonna do if there *are* no more donut shops? Or donuts?”
Aoi – “I'll just get some flour and make some myself! And if there's no flour, I'll just grow some wheat!”
—Aoi talking about her plans in the Epilogue, moments before the survivors leave Hope's Peak Academy.

“Once this is all over, let's eat doughnuts together, okay? It's a promise!”
— Aoi to Miaya Gekkogahara, in the subbed version of Future Arc's fourth episode.

“I've decided! I've decided on the name “Asahina Doughnuts”! Eh hehe, everyone come and buy them, okay? I'll make sure to offer you great service.”
— Aoi in the fan translation of her dialogue from Danganronpa Another End.

Aoi – “Hi! I'm Aoi Asahina. I like sports and donuts and... that's it.”
Makoto – “You're well-rounded, aren't you?”
Aoi – “Like a donut?”
—Aoi's introduction in the first episode of Danganronpa Abridged Thing.

The ship sailed as a result of Aoi often talking about donuts in canon, with them being her favorite type of food. Like any other ship of this sort, it's shipped jokingly. As a result, there aren't many fans who genuinely ship it, which results in the ship losing in popularity to Asahina's other ships, especially major ones, such as Sakuraoi or Naehina.

Because it's a cargo ship between a character and a type of food, most of the fan art shows Hina eating donuts, sometimes obsessively. While there's still some that do, fan art and fan fictions rarely portray Asahina's love for donuts as romantic one.

Danganronpa Abridged Thing, a popular fan parody of the series, portrayed Aoi as a one-dimensional character who's only interested in donuts and almost all of her lines involve them in some way. This has further spread the belief of how important Hina's love for donuts are for her character. 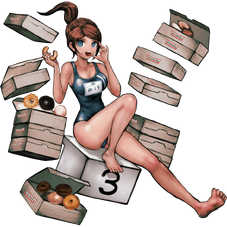