“I'm not exactly a fan of scary stories, but I'll tell you as many as you want, Nene-chan, if it will make you feel better!”
— Aoi to Nene

Aoi always tells Nene about the school's rumors about the supernaturals, and Nene believes her since most of the rumors came true. Nene actually doesn’t mind Aoi’s scary stories and actually enjoys them. She also refers to Aoi as the “Queen of Popularity”, since she has better luck with men than Nene. Usually when Nene is busy, Aoi fears that she is just avoiding her and just doesn’t love her anymore. However, Nene assures her she still loves Aoi.

In the Misaki Stairs Arc, Nene was the only one who remembered Aoi— she was very upset about Aoi’s disappearance, as no one, not even Akane remembered her. So, Nene gathered the courage to take on the Misaki Stairs rumor. There, Nene met the doll version of Aoi, and was horrified that Aoi had become a doll. When she had the real Aoi back, she was overjoyed.

When the rumor of the “Love Confession Tree” tree was going on, Aoi listened to Nene talk about this a 'boy'(Hanako) who might like her. Aoi was very interested in who Nene was talking about, willing to listen to her go on. Nene is also well-aware of Akane’s crush toward Aoi. The next day, when Nene is about to tell her about Hanako's request, she is instead greeted by a crying Aoi, and Nene immediately asks her what's wrong.

In the Clock Keeper Arc, Hanako possesses Nene so he can get some information from Aoi. He does that by "seducing" Aoi after possessing Nene’s body, and Aoi gives off an uncomfortable expression. Nene worries over the fact that Aoi will think she’s weird and she begs Kou to exorcise Hanako. He asks her if she's keeping anything from him with suggestive poses, that even flustered Kou to the point where he couldn't exorcise Hanako. The possessed body lifts Aoi's face and sweetly threatens her to talk before he's about to kiss her. They are only stopped by a loud shout from Akane, who is apparently furious at 'Nene's' actions. Everyone follows Akane, and Aoi is left sitting against the wall with a confused and forlorn air. Notably, Aoi sighs that she "missed her chance to tell [Nene] again."

Nene encounters Aoi once more in the practice garden, to which Aoi says "I caught you!♥" while trapping her in a kabedon. She tells Nene that she has something to tell her, but was worried that Nene might have started hating her. Nene quickly denies this worriedly, to which Aoi replies that she is relived— although acting very pushy. Aoi 'threateningly-flirtatiously' asks if they can talk the next day, and then cheerily runs off, saying "it's a date!♥" Nene internally frets that Aoi can make people's heart race, attributing it to her popular girl skills. To make up for the incident, Nene takes her on a picnic date afterwards.

In the Hell of Mirrors Arc, Aoi is the one who brought up the 'hands' that followed Nene everywhere. Later, Nene sees the mirror version of Aoi calling Nene’s ankles fat. When Nene asks if Aoi thinks her ankles are fat, Aoi denies it and says she doesn’t think that at all. She became slightly aggressive and asked Nene who said that to her.

Entering the Picture Perfect Arc, Aoi and Akane are the first two characters to be 'crossed out' by Shijima, and Nene shows alarm when the two crumble. When Aoi calls out to Nene later, she shows intense relief that Aoi is alive and well; clinging to the purple-haired girl as she is slightly surprised by Nene's actions. Aoi hands Nene a cookie in her mouth and invites her down for tea while they stargaze.

Aoi was taken away by school mystery No. 6 in the Sacrifice of the Grim Reaper Arc. She volunteered to be the first to greet the 'visitors' in Shinigami's boundary (Nene, Akane, and Hanako). Nene notices that the basket Aoi had woven was lighting up, being worried at first. Aoi appears behind her, surprising the girl with a "Guess who?♥" Nene tearfully greets her best friend, worrying about what No. 6 did to her; Aoi lies and says that she escaped when she saw the three coming. Later, Aoi slyly suggests that the two take some time together to talk about the boy Nene likes.

Upon learning of her death, Nene was visibly devastated.

Aoinene has a good amount of followers, as fans love their dynamic and relationship with each other. Aoi and Nene are extremely close friends that would do anything for the other, even going great lengths to make sure the other is okay. Aoi is notably Nene's supplier of school rumors, and Nene has clearly shown her affection towards Aoi many times throughout the series.

The ship is typically more popular with manga fans than anime fans, because of the scene where Hanako takes control of Nene's body to get information out of Aoi by being seductive. The subject matter that Aoi didn't tell Nene was debatable, as it was never fully revealed, but fans of this ship like to think that Aoi was about to confess to her before Akane interfered. Since it was right after This draws a parallel to a previous chapter, when Aoi is about to tell Nene something with a flustered expression. She never does, as she is interrupted by a shout from some classmates.

Like Kounene and Sakunene, Aoinene is a more underrated ship in the Toilet-Bound Hanako-Kun fandom. Despite that, it is also the most popular femslash pairing for both characters, as Nene mentions Aoi often and the latter is a relatively popular side character. Hananene and Aoikane are the higher-ranking rival ships for the two, owing to the fact that both of them are the main canon pairings in the fandom. 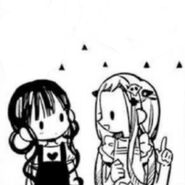 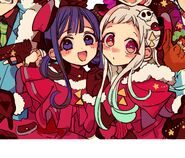 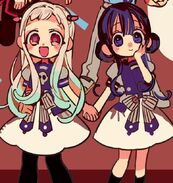 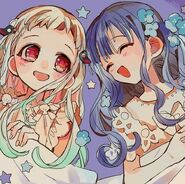 Aoi/Nene tag on AO3
N. Yashiro/Akane A. tag on FanFiction.Net