Arkos is the het ship between Jaune Arc and Pyrrha Nikos from the RWBY fandom.

Pyrrha first appeared in Chapter 3 "The Shining Beacon, Part 2" just after Ruby and Jaune split up in the auditorium. Ironicly, Jaune wonders out loud where he could "find another nice quirky girl to talk to" and Pyrrha (standing a few feet behind him) watches him for a second as he walks away.

In Chapter 4 "The First Step", which is the very next day, Jaune and Pyrrha meet for the first time, with Jaune initially brushing Pyrrha off while trying to hit on Weiss. When Jaune is talking about forming a team with Weiss, Pyrrha interjects that the teams are comprised of four people each. Jaune then tells Pyrrha that maybe she could be on his team. When Weiss explains that Pyrrha is a star athlete, Jaune at first agree that she is probably too good for his team, but he quickly becomes excited when Pyrrha said that she thinks he'd be a great leader. When Jaune goes back to his play at Weiss however, Weiss asks Pyrrha for help and Pyrrha uses her spear to pin Jaune to the wall. Pyrrha and Weiss walk out the locker room with Pyrrha apologizing to Jaune and saying it was nice meeting him with Jaune only meekly able to respond with "Likewise".

In Chapter 5 "The First Step, Part 2", Jaune (having been launched into the air as part of the initiation test) has no way to stop his fall, so Pyrrha helps out by once again using her spear to pin to him to a tree, which she apologizes for (for some reason). After Weiss returns to Ruby rather than try Jaune for a partner, Pyrrha arrives, jokingly asking "are there any spots left on your team". Jaune roles his eyes exacerbated but then smiles.

In Chapter 6 "The Emerald Forest", After Jaune cuts his face on a branch, Pyrrha explains what aura is (an energy force connected to your soul that protects your body and allows you to use your semblance), and activates his using hers.

In Chapter 7 "The Emerald Forest, Part 2", they enter into a dark cave together and Jaune quickly embarrasses himself in fount of Pyrrha by dropping their torch. Then Jaune grabs on to what he thinks is the relic they are searching for but is really a Deathstalker stinger. After the Deathstalker bursts though the cave, it sends Jaune flying and Pyrrha chases after him.

In Chapter 8 "Players and Pieces", They both manage to end up at the forest temple and after deciding with team RWBY to take the relics and run, Jaune takes the second rook piece, making him and Pyrrha a team with Ren and Nora. After an intense battle, they manage kill the Deathstalker with some teamwork with Ren and Nora. Ozpin later names the four of them team JNPR.

A few weeks later, Pyrrha and the rest of the team notice that Cardin Winchester has been bullying Jaune since the semester started. They offer to help and Nora offers to break Cardin's legs, but Jaune brush them off. Later in class, Jaune is hit by a paper football awaking him so Oobleck asks him to answer the question he just asked. Despite Pyrrha's efforts to mime the answer to him Jaune answers incorrectly, but Cardin fail to answer too so Pyrrha delivers the correct answer. On the way out of class, Cardin shoves Jaune down so Pyrrha also offers to break Cardin's legs. Pyrrha then takes Jaune up to the roof of the dorms and offers to help improve his fighting, but Jaune brush her off and says he needs to do this on his own. When Pyrrha insists that Jaune has nothing to prove since he already qualified for Beacon, Jaune reveals that he faked his transcripts to get in and he need to get better on his own, so he tells Pyrrha to leave him alone. As Pyrrha storms off, Cardin climbs to the roof and says he heard the entire conversation. Cardin says he'll keep quite about Jaune's cheating if Jaune agrees to do what ever he says.

After a few weeks, Jaune is sulking in the hallway so Ruby goes to talk with him. Jaune tells Ruby that Cardin got him on a leash on Pyrrha hasn't been talking to him. After Ruby gives him advice on being a leader, Cardin calls Jaune and tells him to get wasps for the field trip tomorrow. On the trip, Cardin planed on throwing a jar of tree jelly at Pyrrha and release the wasps at her. When Cardin tries to make him throw the jaw at Pyrrha, Jaune refuses and throws the jar at Cardin instead. As Cardin and his team beat up Jaune and Cardin promises to get Jaune expelled, Jaune calmly says "I don't care what you do to me, but you are not messing with my team". The negative emotions attract an Ursa grimm, causing Cardin's team to scatter, but Cardin is trapped by it. Jaune starts fighting the Ursa off and thanks to Pyrrha secretly helping him out, Jaune manages to kill it. Pyrrha keeps her involvement a secret to boost Jaune's confidence while Jaune, having saved Cardin, demands that he leave his friends alone, which Cardin silently agrees to. Later Jaune brings Pyrrha back up to the roof to apologize and to ask Pyrrha for the training she offered earlier, which she agrees to give him.

In Chapter 5 "Extracurricular", we see that Pyrrha is still training Jaune like they said they were. After Pyrrha compliments Jaune's improved sword fighting, Jaune plans on skipping the rest of the training for the night. When Pyrrha asks what's wrong, Jaune explains Weiss has been shooting down his attempts to ask her to the upcoming dance. Pyrrha points out that he could just kind someone else (clearly referencing her self), but Jaune don't think Pyrrha understands, believing that she must have tons of people wanting to ask her out given how famous she is. Pyrrha asserts that she does understand, but Jaune laughs her off, promising to wear a dress if she doesn't get asked out.

In Chapter 6 "Burning the Candle", Pyrrha encourages Jaune to ask Weiss to the dance by being honest. After Jaune leaves to try, Nora tells Pyrrha to "practice what you preach" having noticed her crush on Jaune.

In Chapter 7 "Dance Dance Infiltration", Jaune see Pyrrha at the dance and notices something wrong, so he goes to talk to her. He tells her that she looks nice and asks where her date is, but Pyrrha tells him no one asked her. When Jaune expresses shock, Pyrrha explains that people avoid her because they all think she is on a level far above them and aren't worthy of dating her or even being friends with her. She then goes on to says that is what she likes about Jaune, he always treated her like everyone else. She credits him for helping her to make true friendships and says she wish she was at the dance with someone like Jaune, someone who sees her for her. After telling Neptune to be nicer to Weiss, Jaune leaves the dance and comes back in a dress, fulling his promise to Pyrrha. After Pyrrha has a good laugh, she Jaune, Ren, and Nora all dance together.

In Chapter 2 "New Challengers...", team JNPR stops in the middle of their tournament fight to discuss their team attack names and Jaune gets worried that Pyrrha doesn't like the name he picked for hers and his combo attack.

In Chapter 8 "Destiny", Pyrrha is visible distressed so Jaune sits by her and gives her some cotton candy to try and make her feel better. Jaune then takes her hand and explains that she was the first person to believe in him and that since she has always been there for him, he wants to help with what ever she is going threw. Pyrrha then rests her head on his shoulder as says he's already helping. However Pyrrha then begins to explain her view on destiny and how she always believed she was destine to save the world and something has come along that could be how she fulfills her destiny, but at the cost of who she is (refering to Ozpin's offer to become the fall maiden which would change her personality). Jaune, not knowing what Pyrrha is talking about, tries to encourage her by telling she wouldn't let anything stand in her way. This leads to Pyrrha breaking down and crying and she accidentally actives her semblance sending Jaune fly into the wall. She tearfully apologizes and runs away leave Jaune alone and confused. Jaune can later be seen in the audience at Pyrrha's tournament fight against Penny with a visible look of worry on his face for Pyrrha.

In Chapter 9 "PVP", Jaune is still in the crowd worried about Pyrrha, but his worry turns to shock and horror with rest of the crowd when Penny is ripped apart and Cinder begins her message.

Arkos was a juggernaut of a ship in the first three volumes of RWBY. It sailed as early as volume one due to them being placed on a team together and Pyrrha's offer to help Jaune. Pyrrha's obvious crush on him and their dance together in volume 2 only serving to make it more popular. Unfortunately, the ship sunk after Pyrrha's death in the volume three final. While some still refuse to believe Pyrrha really died, and others refuse to ship Jaune with anyone else regardless, many fans jumped ship to rival ship Whiteknight (Jaune x Weiss) instead, a move that has lead to them being branded as "traitors" by some of the more toxic Arkos fans. Arkos is the most written for ship on AO3 for both Pyrrha and Jaune. 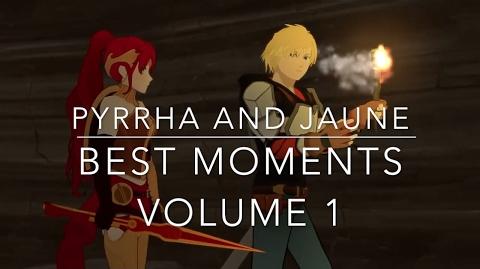 RWBY AMV - How To Save A Life ~ Arkos

RWBY AMV - Be Somebody ~ Arkos

RWBY AMV - Last of the Real Ones ~ Arkos

RWBY AMV - What Hurts The Most ~ Arkos

Pyrrha Nikos, I Am Lost Without You "Arkos" - RWBY AMV

RWBY- Arkos- Still Worth Fighting For

RWBY AMV-Arkos- Stand By You

RWBY AMV- Ghost of You -arkos-

RWBY AMV - When you're gone, I feel incomplete - Arkos

-RWBY AMV- Arkos - Say What You Will

Jaune x Pyrrha - Without Me

Arkos - Nothing can replace you (RWBY AMV - spoilers volumes 3-4)

RWBY AMV -Arkos- You are my sunshine