Asakane is the femslash ship between Aoi Asahina and Akane Owari from the Danganronpa fandom.

Debuting in different games, Aoi and Akane never interacted on-screen in canon. However, they share one event together in the non-canon bonus mode of Danganronpa V3: Killing Harmony - Ultimate Talent Development Plan.

In said event, Aoi starts feeling hungry upon seeing a hungry Akane. However, she's reluctant to eat, as she worries about her body, and is surprised to see that Owari doesn't. Asahina is then encouraged by the Ultimate Gymnast to eat whenever she feels hungry, but only as long as she doesn't eat the latter's food.

The two have numerous similarities, from personality traits and character design to their role in the killing game and their relationships during it. Both of their names start with the letter A. Both are brown-haired and dark-skinned girls wearing clothes in mostly red-and-white. Both have one of the biggest chest sizes in the entire franchise, which they also partly show through their exposed cleavage. Both girls have a gimmick of eating a lot, although in Aoi's case it's just donuts. Both have athletic talents, with Asahina being the Ultimate Swimming Pro and Owari being the Ultimate Gymnast. Both also quickly become best friends with their other athletic classmate - Sakura Ogami and Nekomaru Nidai respectively. Both of their best friends also happen to be the Gentle Giant character of their respective cast, and die in Chapter 4, with their deaths affecting their surviving friends. Finally, both get to survive their respective killing games.

The ship sailed as a result of the two being Foil characters to each other, with the numerous similarities between them. The ship was further fueled by the two finally interacting together in Ultimate Talent Development Plan.

During the times of Danganronpa 2: Goodbye Despair being released, the multiple similarities between the two that could be noticed even from just their character designs led many fans to theorize that Akane was actually Aoi in disguise. Said fans further supported this theory on assuming that a few other Killing School Life survivors also returned with a different design, with Nagito Komaeda being theorized to be Makoto Naegi (due to having the same talent, voice actor/actress, and his name being an acronym for "Naegi Makoto da," meaning "I'm Makoto Naegi"), and Byakuya Togami seemingly returning as himself, except fatter. However, those theories were eventually debunked by the plot of the game.

As a result of being a ship based on the similarities between two characters and their only interaction in a non-canon bonus mode, it's a rare pair. While still being fairly popular for such a minor ship, its popularity is nowhere close to that of both characters' main ships, such as Sakuraoi or Naehina for Aoi, or Akanidai for Akane. 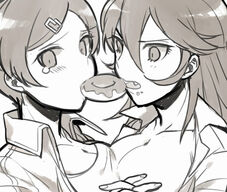