AtsuHina is the slash ship between Atsumu Miya and Shōyō Hinata from the Haikyu!! fandom.

Atsumu and Hinata are teammates for the MSBY Black Jackals, a Division 1 team in the Japan V.League. Hinata plays the position of opposite hitter while Atsumu is the team's setter. This makes them the hitter/setter duo. There first interaction was when Atsumu saw Hinata at the Nationals, and seeing his skills, he starts wondering who that person could be. The two meets face to face when Atsumu's volleyball team, Inarizaki, plays against Karasuno.

They seem to be good friends after the timeskip. They are seen to be comfortable around each other even in spare time. Also, they have very good cooperation with one another on the court. It's even implied by Tsukishima and Keishin that they're able to pull off a quick-set even faster than Karasuno's infamous rookie tandem. In addition to this, when Atsumu gets the 1st touch, Hinata follows through to set the ball.

Prior to being on the same team, the two were rivals throughout their high school career during Nationals. During Hinata's first year, they competed at Nationals. Karasuno ended up beating Atsumu's Hyogo-based team, Inarizaki. With that, this inspires Atsumu's declaration: "One day, I'm gonna set for you." His words were not a false promise, and would soon become a reality six years later.

AtsuHina is considered a popular ship, especially after the time-skip, being Hinata's second most popular ship after KageHina, and Atsumu’s second popular ship, too, following SakuAtsu. There is a reasonable amount of discourse between KageHina shippers and relatively new AtsuHina shippers following the start of the BJ vs. Adlers match, but many members of the Haikyuu!! fandom are multishippers, so ship hate is not common. It's a popular trope to headcanon Hinata as crushing on or dating Kageyama Tobio throughout high school, but then falling for Atsumu post-timeskip. The two ships sometimes appear in works together, around 1/9 of all AtsuHina fanfics have KageHina as a second pairing.

A Shouyou-centric polyamorous dynamic is also popular, typically including Atsumu alongside various other characters within the series that are shipped with Shouyou. 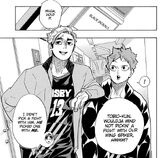