AtsuOsa is the family ship between Atsumu Miya and Osamu Miya from the Haikyu!! fandom.

Atsumu and Osamu are identical twin brothers and second years at Inarizaki Highschool which is located in the Hyōgo Prefecture of Japan. They are known for their dissimilar yet indistinguishable personalities as Osamu is more introverted and reserved whereas Atsumu is more extroverted and loud. Both however share a strong bond which shows through all their oppositions or conflicts that are quickly resolved. Both brothers join Inarizaki's official boys volleyball club and inevitably make it into the starting line up. Atsumu plays the Setter position while Osamu plays the Opposite Hitter position. On court both boys are very serious and engrossed in the sport. Off court however, they can be a handful.

We see the first appearance of Atsumu Miya in the anime at the Japan Youth Training camp which is aired through the beginning of season 4. However, Osamu Miya makes his appearance in episode 13 of season 4. In the episode, he is revealed alongside his teammates to Karasuno Highschool as Atsumu's identical twin brother. During the fourth season, Osamu is seen teasingly criticizing his brother and also contemplating different thoughts about Atsumu in general as one scene in the anime shows Osamu telling himself that he doesn't fully have faith in Atsumu off court due to his sly antics of stealing Osamu's clothing or food and bluntly lying. Even though Osamu doesn't trust Atsumu so much, on court Osamu finds himself completely trusting Atsumu.

Atsumu and Osamu can comprehend each other well. They can read the latter like the back of their own hand as they have lived together for their entire lives. They are also seen silently communicating or talking through brief quotes/gestures that the audience themselves don't quite understand but the twins themselves do. After the time skip, it is shown that Osamu doesn't pursue volleyball as a lifelong career, instead he takes the job as an owner of a restaurant while Atsumu goes on to be a professional volleyball player. Despite this contrast however, both are still talking and interacting as it is seen that Atsumu brings his teammates (The MSBY) to his brother's shop: Onigiri Miya.

“Why is it that whenever we're in a game your mental age regresses by, like, five years?”
— Osamu to Atsumu, Volume 28 Chapter 251)

“Faith... It's not like I super have faith in 'Tsumu or anythin' like that. S'not like he listens to what you tell him, He doesn't return what's borrowed to him, he's a habitual liar... So it's not like we need faith between us anything like that... I just know that the ball is coming to me”
— Osamu Miya, Volume 28 Chapter 251

“Skillswise I'm just as good as you. But I think that, when all's said and done, you love volleyball just a teensy bit more than me.”
— Osamu to Atsumu, Volume 32 Chapter 279

AtsuOsa isn't a popular ship among fanfiction websites but are popular among the fan artists, mostly in Japan. Although, there are many fanfictions on AO3 for this ship but some of them are fanfictions based on romantic interests rather than brotherly love. There are currently 1526+ gen works of the duo while there are 692+ romantic works. The romantic AtsuOsa ship is disliked by many people due to them being brothers. When it comes to the family AtsuOsa ship, Osamu is considered the more quiet twin by fans whereas Atsumu is considered the more chaotic twin by fans. 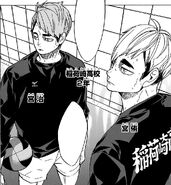 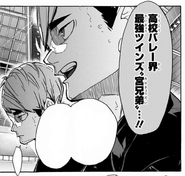 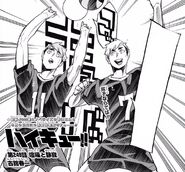 Enemy Quick! - HAIKYU!! TO THE TOP