• Battle Couple
• Declaration of Protection - Atsushi always tries to protect Kyouka.
• You Are Not Alone - He made her feel better, when she thought that she can only kill people.
• Boy Meets Girl
• Falling Into His Arms
• It’s Not You, It’s My Enemies - Kyouka to Atsushi.

Atsukyoka is the het ship between Atsushi Nakajima and Kyouka Izumi from the Bungou Stray Dogs fandom.

Atsushi and Kyoka first met in season 1 as Atsushi accompanies Yosano on her shopping trip. He spots Kyoka in the crowd for the first time. Later on in the episode, the train they take home is hijacked by members of the Port Mafia. Atsushi runs into Kyoka again only to find out she is a member of the Port Mafia and has orders to detonate a bomb. During this encounter, Atsushi is able to get through to her and gets her to reveal the bomb which is strapped around her. Consumed in her self hatred she pushes herself out of the train just as the bomb is about to detonate not wishing to kill any more people. Atsushi leaps after her and rips off the detonator effectively saving her life. Later on, they are found sitting ashore, where Atsushi eventually collapses in her lap from exhaustion.

Afterwards they are both taken back to the agency to be treated. Kyoka is then questioned, but insists she will only release intel on the Port Mafia if they take her to eat steamed tofu which Atsushi agrees to, but later comes to regret because of the price of the specific restaurant Kyouka wants to visit. After this, Kunikida strongly advises Atsushi to turn her into the Military Police in private, but Atsushi is very reluctant and decides instead to take her out on a "date". He visibly blushes and stutters after he realizes what he had proposed, but she agrees anyways. The two are seen enjoying themselves all over the city, and Kyoka seems to lose her formerly aloof manner, and even drags Atsushi to go to a crepe stand. However, their "date" is ended as Kyoka takes them to the final stop on their date. The Military Police Station where she intends to turn herself in.

Just as she is about to turn herself in, members of the Port Mafia kidnap her and Atsushi, bringing them to a barge ship. On the ship, they are held captive as Akutagawa aims to kill Atsushi, and Kyoka unsuccessfully tries to save him but she ends up in a chokehold. Instead of giving in, however, Kyoka says how she enjoyed their time together how "the crepes were good" and Atsushi is shocked. Kunikida eventually shows up and Atsushi is given the chance to escape on his own, but he decides to go back and save Kyoka, the two escape together.

Afterward,s as Atsushi goes back to the office he worries if the others will accept her only to walk to find she is dressed up in a maid costume with the rest all around her fawning over her. Kyoka soon pleads to join the Agency so she could "prove to herself that she could do more than kill," and after hearing this Atsushi backs up her claim, and the president allows it.

After Kyoka joins the agency Dazai decides to jokingly set her up as Atsushi's new roommate to "protect her". Later Kyoka has her first assignment and fails miserably, Atsushi attempts to cheer her up and buys her a crepe. He also mentions how she might use her supernatural gift in the future which she is very startled by. The two are interrupted by a Port Mafia member and Kyouka's former superior Ozaki Kouyou, who tells Kyouka that she needs to come back to Port Mafia. Kyouka refuses and tries to fight back, but is quickly bested. Ozaki says she'll kill Atsushi if she doesn't join her, and to protect him she does, before reinforcements from the Port Mafia, Armed Detective Agency, and Guild arrive, and she escapes in the crossfire.

She isn't seen again for a while until she shows up to save Atsushi who is attacked by the Guild leader, she tries to protect Atsushi; who is injured, but both end up taken hostage by the Guild. Kyouka feeling as though she can't save anything only kill does little to escape or help save the city from destruction until eventually, Dazai convinces her to help. Unable to stop the ship from crashing into the city Atsushi grows desperate, then he hears Kyouka's voice. She tells him she is able to set up a drone to destroy the ship before it crashes into the city, and that she will not be able to escape with them as she is chained up. Atsushi tries to come up with a different plan but time is up and the survivors are all hurled out of the ship on parachutes. Believing her dead Atsushi is very distressed, only later does he find out from Dazai and the President that Kyouka was able to escape. She arrives on land and Atsushi runs and embraces her.

In the movie, Dead Apple, Atsushi and Kyouka are both asleep in their dorm, both dreaming of their own abilities and a strange fog. Kyouka wakes Atsushi, telling him what was happening to her and him telling her the same thing was happening to him. They exit the dorm to see all of Yokohama is covered in a thick fog. They meet up with Kunikida, who explains that the reason for the mass suicides of ability users was another ability that made people's own turn against them. Kunikida tells them to go find the ability user, who is currently teamed up with Dazai and a man named Fyodor Dostoyevsky, while Kunikida stays behind to fight against his own ability. The two encounter Akutagawa, and soon have to face off on their own against their abilities in order to reclaim them, which they successfully do. Atsushi, however, is still unable to use his ability in spite of defeating the duplicate tiger, and so Kyouka and Akutagawa decide to go face the ability user on their own, leaving Atsushi behind. However, Atsushi regains his memories of his childhood when he was tortured by Shibusawa, the ability user behind the fog, and also regains his ability, and joins Akutagawa and Kyouka in defeating Shibusawa.

This section is in need of major improvement. Please help improve this article by editing it. The ship is often controversial in the fandom due to the age gap between Atsushi and Kyouka, with Kyouka being a young teen and Atsushi being an adult. Many people either aging Kyouka up or shipping them in a platonic way. Despite this, there’s been some implications of feelings on Kyouka’s side, and the two went on a “date” together. 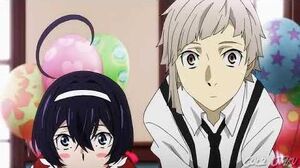 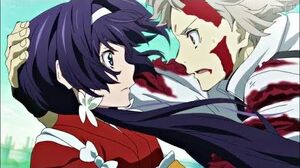 Dazushi Family the familyship between Osamu Dazai, Atsushi and Kyouka.