Never Met (outside of RBTI)

Aurelsa is the femslash ship between Aurora and Elsa from the Disney fandom.

As Aurora and Elsa are from different series, they have never met in canon. In Ralph Breaks the Internet, after the two help the other princesses save Ralph, Aurora is seen standing beside Elsa[1], along with Elsa moving in closer to Aurora in one of the film's trailers of the Disney Princess group photo scene[2].

Both have blue dresses, that were made through magic. As well as their main antagonists attending the celebration parties for Aurora and Elsa. Maleficent: Mistress of Evil and Frozen II also has the two bring two worlds together, as they start their new lives and leave Maleficent and Annas' sides knowing that they'll be alright without them. Just as Elsa is able to form a connection with elemental spirits, Maleficent has Aurora befriending other magical creators. When magic threatened the two at a young age, their fathers did what they could to protect Elsa and Aurora from it, by sealing Elsa and her magic within the castle while Aurora was sent away for sixteen years. Even though the two were happy in their cottage and second castle homes, they choice to be with their families.

When Maleficent and Frozen II has Aurora and Elsa learn that their father and grandfather are cruel kings, who had harmed the people of the magical worlds they became apart of, they choice to repair the actions of their crimes. Since both Elsa and Aurora are kind hearted and try to do the right thing when they can. Even though Elsa was born with her powers, Aurora was given a chance to wield magic for a short time in one of the Disney Princess specials.

This ship became a meme in Brazil after a video by Damares Alves, the Brazilian evangelical pastor and current Minister of Human Rights, Family and Women, reached the public saying that Elsa finished the first movie alone in the sand ice castle because she was a lesbian, and in Frozen 2 she would wake up to Aurora with a gay kiss.[3]

MMD fanart of the ship commonly uses Aurora's MMD model from Kingdom Hearts: Birth by Sleep, while Elsa's model is fan-made. Since most of its MMD work was made before Elsa appeared in Kingdom Hearts III. There have also been a few Once Upon A Time fanfics that have their Once counterparts meet one another. There has also been fanart of Elsa waking Aurora up with a true love's kiss.

Because they made cameo appearances in Ralph Breaks the Internet, some fans feature Elsa and Aurora wearing their modern style clothes in their fanart. A few AUs of Sleeping Beauty/Maleficent sometimes portray Elsa as Aurora, because they both have blond hair and wear blue colored dresses. Like Aurora is with Maleficent in the remake, she would see Elsa as a person and not a monster. On AO3, the ship has only 5 fanfics, along with the ship having a small fanbase on both DeviantArt and Tumblr. 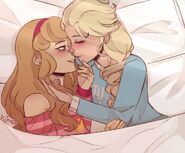 Aurora x Elsa - A good way to wake up by kimocchika