• "I Know You're in There Somewhere" Fight - When Sara is possessed by Mallus, Ava is able to get her back.
• Anguished Declaration of Love
• Battle Couple
• Belligerent Sexual Tension
• The Big Damn Kiss
• Enemies to Lovers
• Everyone Can See It - Literally. All the Legends (and Gary) want them together.
• Headbutting Heroes
• Interrupted Declaration of Love
• Like an Old Married Couple
• Love Cannot Overcome
• Married to the Job
• Office Romance
• Official Couple
• Please Don't Leave Me
• Temporary Break Up
• Understanding Boyfriend
• Working with the Ex

Avalance is the femslash ship between Sara Lance and Ava Sharpe from the Legends of Tomorrow fandom.

The Legends break into the time Bureau where they have a standoff against several time agents including Ava. Sara eventually disarms Ava, and the two groups are at a stand still till Rip Hunter arrives. Later the Legends have to stop Julius Caesar from conquering the world, and Ava and Sara fight alongside one another. After the fight Ava tells Sara that her team is worse than she imagined.

Ava tracks down the Legends issuing their arrest. She breaks into the Waverider where she and Sara engage in a fight. The two are unable to get the upper hand on one another, and end up collapsing in exhaustion. The two take a break in the galley and get some water. The two talk about the state of Legends when a miniature version of the Sabertooth Tiger returns to normal size. It chases the two through the ship eventually cornering Ava. Sara saves her using one of the time bureau bracelets, but accidently locked them in the ship prison. Ava slips that there’s an unknown force out there that the Legends are going to have to face, but doesn’t continue, angry at the Legends incompetence. When the other Legends let them out of the prison, Sara asks what Ava meant by an unknown adversary but Ava doesn’t answer and leaves.

BEEBO THE GOD OF WAR

Sara is predictably apprehensive about having to speak to Ava when she calls the waverider. However she is surprised when Ava offers her condolences for Martian's recent death. When Sara sees how quickly the anachronism is cementing, she asks Ava for her help which Ava is more than happy to give. While on the mission, a couple of vikings asks if they have husbands and Sara gives Ava an interesting look when she says she's "not the husband type". When the Dark's step in and make the anachronism worse, Ava request the Time Bureau send more agents to help, but instead she is ordered to return. After Sara is taken into Mallus's realm, Ava pulls her out having come back believing she needed to help.

THE CURSE OF THE EARTH TOTEM

NO COUNTRY FOR OLD DADS

THE GOOD THE BAD AND THE CUDDLY

Sara thanks Ava for spending the night at her place instead of Ava's. Ava says that she likes sleeping by Sara, but isn't overly fond of sharing a bathroom with so many people. Garima walks past, Ava shocked that Sara let Mick keep using Bridget's diary. Sara says it keeps Mick happy, as they walk into the kitchen. Ava insists that Mick stop using it, but Zari and Ray also think it's better to keep Mick happy. Ray finds a quiz on the back of the cereal box about serial killers, which Ava finds the answer wrong, meaning a fugitive is involved. They then head to New Orleans in the 1800s.

“She’s the kind of girl you take home to your family, I’m the kind you take to exorcism.”
— Sara, Daddy Darhkest

Sara – “Gideon, can you get me a line on Ava, please?”
Gideon – “Yes Captain. Would you like some privacy as well?”
Sara – “Cheeky bot.”
— Gideon shipping Avalance

Ava – “Captain Lance, I was just about to call you.”
Sara – “Really? I mean… cool. Cause I just wanted to… compare notes and I thought maybe if you’d like to come to the ship… ”
— Sara being a flustered bi who has no idea how to ask out a girl she actually likes

Ava – “What are you doing?”
Sara – “I'm admitting something that could save us both. I love you.”
— Guest Starring John Noble

Ava – “Dishes. Piece of cake. Go go go.”
Sara – “You know this seems, more like one of your fantasies then your fears. Washing me do dishes.”
Ava – “Please if it were up to you, we'd only have paper plates.”
— The Eggplant, The Witch, and the Wardrobe

Ava – “You know, we should probably talk about whether or not we want kids.”
Sara – “Eh, let’s wait until the other eight are old enough to handle the news.”
— The Eggplant, The Witch and The Wardrobe

Shipping for the two was slow at first, but many were drawn to the idea. Those liking the enemies to friends to lovers trope were especially fond of shipping the two. Shipping took off more after episode 9, and became even more so after episode 10 when it was officially made canon that the two liked one another.

Many were extremely happy when the two got together, and it was literally the only thing talked about on tumblr post episode. When the two broke up many people were upset, but were more easily accepting of it, since the show is on the CW, and they are most likely going to end up back together, which they did by the end of the season. While they broke up again in season four, it was only for two episodes that time. 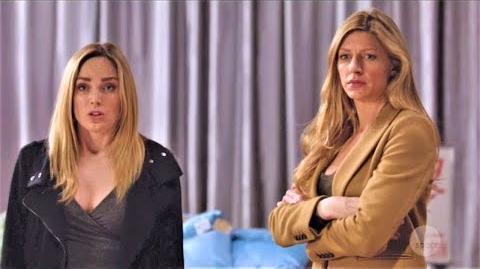 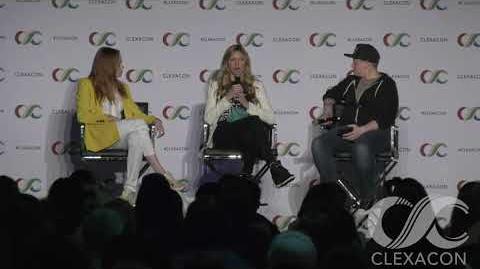 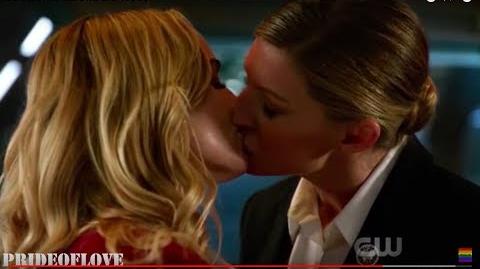 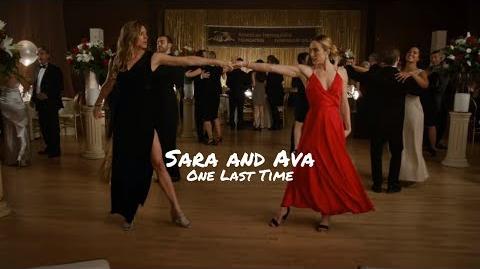 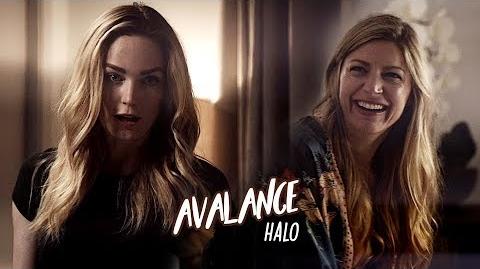 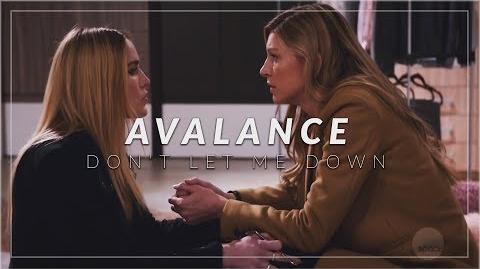 Retrieved from "https://shipping.fandom.com/wiki/Avalance?oldid=175074"
Community content is available under CC-BY-SA unless otherwise noted.