AwaMomo is the het ship between Yosetsu Awase and Momo Yaoyorozu from the My Hero Academia fandom.

Momo and Yosetsu are in opposing hero courses; Momo in 1-A, and Yosetsu in 1-B. The two classes have had a rivalry struck from the beginning, as both want to prove themselves as the strongest class. This somewhat sets up them up in a “Romeo & Juliet” type situation, if Momo begins to reciprocate Yosetsu’s feelings.

Yosetsu and Momo do not canonically meet until Season 3 during the training camp. When the Vanguard Action Squad attack against the heroes to kidnap Katsuki Bakugo occurs, the villain Mustard spreads his poison gas through the forest knocking most students unconscious. Momo uses her creation quirk to make gas masks for her, Yosetsu, and every other student she could. Not too long after, Yosetsu and Momo end up on their own in the forest and have an unlucky encounter with the Chainsaw Nomu.

At some point in her fight against the Nomu, Momo is seriously injured due to a head injury and Yosetsu is left to try and drag them both to safety with her Quirk, despite being asked by Momo to leave her behind. Things soon look bleak for them, as the Nomu is far too fast and unrelenting for them to escape. As the creature lifts a blade to kill them, Yosetsu throws his body over Momo’s own in a chivalrous attempt to protect her. Luckily, the Nomu is called away by Dabi in the nick of time, allowing them their lives. Before it can disappear, Momo moves to create a tracker with her Quirk and tells Yosetsu to put it on the Nomu. When Yosetsu finishes putting the tracker on the Nomu, he approaches Momo again and at some point carries her on his back because she could no longer walk. After Katsuki was kidnapped by the League of Villains. Momo is at the hospital and informs All Might and Naomasa that Yosetsu put the tracker on the Nomu that was chasing them and that this may help Katsuki's rescue.

AwaMomo isn’t nearly as popular as other Momo ships, such as TodoMomo or MomoJirou, due to the limited amount of interactions between the pair. Despite this, some fans appreciate a canon crush in the series, and are happy to ship it. A popular idea within fans is Momo taking Yosetsu out somewhere nice for something such as tea or lunch as a thank you for saving her. AwaMomo is Yosetsu's most popular ship. 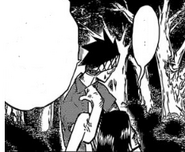 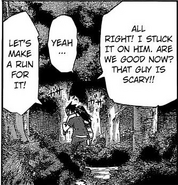 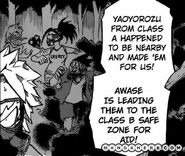 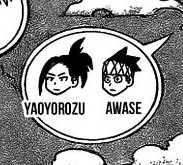 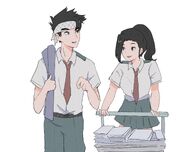