Ayamiya is the femslash ship between Kamisato Ayaka and Naganohara Yoimiya from the Genshin Impact fandom.

They were shown together in an official piece of artwork during the stream of the new Inazuma update/1.7-2.0 update.

From Ayaka's voicelines, she talks about Yoimiya. She mentions that organizing festivals and ceremonies is the job of the Shabukyo and the shrine maidens. " And our handler of fireworks really knows how to build an exhilarating atmosphere". But then she says that she's decided not to ask Yoimiya to oversee the fireworks again because of an incident that involved Thoma and the firefighting teams.

Yoimiya has two voicelines about Ayaka. The first one is labeled "Seriousness", and Yoimiya talks about how the two cooperate together frequently due to their line of work. Yoimiya is grateful for Ayaka because, unlike other people, she always lets Yoimiya finish speaking and answers seriously without showing any impatience. "I'd say that the word 'ladylike' was practically made just for her".

Yoimiya's second voiceline is labeled "Baths" and talks about an experience she had with her. The two once spent the late night talking together about the summer festival. At that point, they were both tired so Yoimiya invited Ayaka to go take a bath with her. But when Ayaka heard that it involved multiple people bathing in the same pool, "she went red in an instant!" And that was when Yoimiya learned that noble ladies can't use public baths.

“The Yashiro Commission and the shrine maidens are responsible for festival affairs, and Yoimiya, as a fireworks expert, knows how to create an atmosphere. So we have become well acquainted with her over the years. Hmm? Public order and fire prevention? We factor these concerns in well in advance during the planning stage. To deny people the chance to see fireworks simply for these reasons would leave them feeling very disappointed.”
— Ayaka about Yoimiya

Ayamiya, also relatively new as with many of the other ones involving Inazuma characters, is enjoyed by fans who enjoy how the characters look together. For both Yoimiya and Ayaka, this ship is popular among the few ships they have. In Ayaka's case, her ship with Thoma, her retainer, rivals this one in popularity and for Yoimiya, other fans ship her with Hu Tao because of the idea that her butterfly necklace was a gift from the Funeral Director. However, this ship is still popular as many people like how the two look together and hope that the release of Yoimiya or further development of the plot will give them even more content with the two.

Although after the final release of Inazuma and the first appearance of Ayaka, it turned out that Mihoyo decided to concentrate more on Ayaka x Traveler, it was also noted that Ayaka has a lot of respect for Yoimiya as a professional and even sends players to her during the story quest.

This ship received separate fuel after the disclosure of their voicelines, in which it was mentioned that the girls went to a public bath together. While going to the bathhouse together is quite common in the Japanese culture that Inazuma is inspired by, it was also received with enthusiasm by the ship's fans due to the implication that the characters are close enough to share some interaction outside of work. 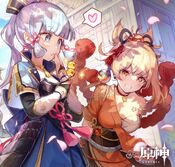 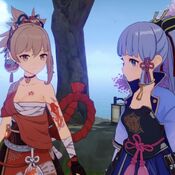 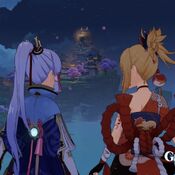 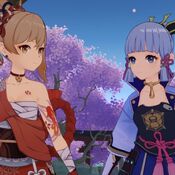 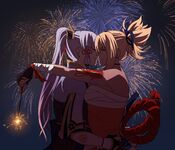 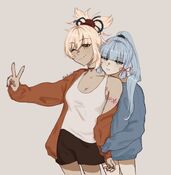 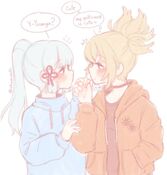 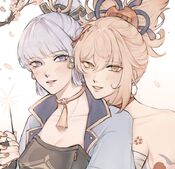