View source
This article is about Ayaka and Aether. You may be looking for the ship between Ayaka and Lumine.

Ayather is the het ship between Kamisato Ayaka and Aether from the Genshin Impact fandom.

In Act 1 of Inazuma's Chapter, Aether first meets Ayaka in the Kamisato Estate, Ayaka asks him to lend them his power but Aether declines and then told that he was leaving right now. Until, Ayaka told him don't, she told him that she'll let him meet the Raiden Shogun but on one condition she told. She told him to fulfil 3 small wishes for her, so Aether accepts it.

After doing the 3 small wishes, Aether comes back to the Kamisato Estate to tell her that he finished it. When coming inside, there was no voice, until Ayaka comes out behind the screen. Meeting him, face-to-face. Ayaka told him that she was delighted to meet him face-to-face. Ayaka states that she now considers Aether as a friend after fulfilling the 3 small wishes for her.

Aether accepts her as a friend now, Ayaka thanks him for it. Ayaka asks him if he could help her fight the Vision Hunt Decree, Aether has reconsidered declination so he finally accepts her and is willing to help her fight the Vision Hunt Decree. Ayaka ask her if he actually will, Aether told her she must keep the promise that she gave to him. Ayaka nods to his response.

In Act 2 of Inazuma's Chapter, Ayaka and Aether went to a festival and enjoyed the festivities. During the festival Ayaka, and Aether tryed multiple activitys, Which would help bond them. After the festival, Ayaka takes Aether Into a forest, where she preformed a dance for him. After that they arive at Komore Teahouse to just find out that Thoma wasn't there. Ayaka suddenly came in, Ayaka asks him if he saw Thoma, in which, he didn't. Ayaka was worried for him, Ayaka told Aether that he taken away by the Tenryou Commission and that, the Raiden Shogun will take his vision. Ayaka had to go and save him but since she was the Shirasagi Himegimi, Aether tells her that he will be the one instead, to save Thoma.

Ayather is a small ship within the Genshin Impact fandom, it's often overshadowed by the two most popular ships, being Thomaya and Xiaother, as well as its counterpart ship AyaLumi. It currently only has 51 works on AO3.

There were lots of implications that Ayaka had a crush on the Traveler due to her Story Quest and her special dish description, which was the reason why Ayather sailed. 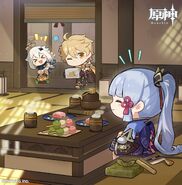