BBRae is the het ship between Beast Boy and Raven from the DC Comics, Teen Titans and Titans fandom.

When Raven was first introduced, she was older than Beast Boy and they were only friends at that time. Raven had a relationship with Kid Flash (Wally West) and Beast Boy with Terra, But Terr

After Raven died and was resurrected by the new Brother Blood in the body of a teenage girl that their friendship started to drift into something more. Raven began developing feelings for him after he welcomed her back to the new incarnation of Teen Titans with open arms, and it was her who initiated their first kiss, right before the Infinite Crisis.

The following year had their relationship on the rocks — Gar, leading the team, was obviously stressed about leading a bunch of inexperienced heroes who cared more about being famous than actual justice. At the end of this year, Black Adam started his bloody rampage across the world after the death of his wife. The team was there to attempt to stop him, but when Adam killed the second Terra, Gar became more distant. By the time Tim Drake returned to the team and took up leadership, Raven had ended their relationship, leaving the team. Raven let the other members believe she was leaving the team because of Gar, when in reality she had a disk containing Jericho’s lost soul, and left to protect him. During this time, she had brief romantic encounter with Zachary Zatara.

After seeking Gar’s help following Deathstroke’s attack on the team, Raven gave hints that she still loved Gar, but he refused to talk about it. Both Gar and Raven rejoined the other members of the original Teen Titans (Nightwing, Donna Troy, Cyborg, Red Arrow, Flash III, Starfire) after attempts on their life by the Sons of Trigon. Gar tried to reconcile with her multiple times, but she turned his advances down, believing it to be necessary for his safety.

The 100th issue of the Teen Titans before the New 52 had Gar and Raven talk about her feelings. This was when Raven finally revealed, to his face, that she loved him, but did not want him to bear the weight of her “curse” that would undoubtedly come with being with her. Gar, being the sweetheart he is, told her that he couldn’t escape that, but he also didn’t want to. When Raven decides that she should stop rejecting the good emotions out of her life of fear for the negative ones, Gar reassures her that it is part of being human, and tells her, “I think you’ve worried enough about the bad. How about we focus on the good for a change?” and then they both shared a romantic kiss.

Raven (who was on Trigon's at that time being) saved Beast Boy's life and mind-controlled him to join their side. However, Raven later sided with the Titans and washed off her spell from Beast Boy. However, it is referenced that they worked together for a while with Dick Grayson's Titans, which means that it was not their first encounter.

They were best friends but often flirtatious towards each other. Throughout their hero life, they were always in touch and they were together in almost all the team. After Tim Drake's Titans disbanded, Raven went to live with her aunt where she had a mini adventure. During this time, she was connected with Beast Boy through social medias.

Later, when they were kidnapped by Damian Wayne to join his version of the team, Raven had a relationship with Kid Flash (Wallace West) before they broke up. Beast Boy was looking forward for a date and he asked Raven for dating advice. After the events of No Justice, both of them left the team to join the Titans, the adult group of former Titans.

During their times with the Titans, they maintained a really good friendship. Raven's soul-self was stolen and Beast Boy was by her side to help and console her. At the end of the series, when Beast Boy's life was endangered and other Titans lost their hopes about him, Raven risked her own life to save him.

After Dark Knights: Death Metal, the relationship between Beast Boy and Raven was confirmed.

Raven falls down fighting Trigon and Beast Boy saves her. In The Masks someone attacks Raven and Beast Boy turns to a bull to rescue her then they get up attacking Beast Boy, and Raven saves him and Beast Boy blushes. Happy Pink Raven said she always thought Beast Boy was funny but looks aren't everything.

Beast Boy loves when Raven shows her legs. Raven protects Beast Boy when the angry cloud attacks them. Cyborg said it was silly to think Raven was in love with Beast Boy we're sorry Raven says you should be just the thought of Beast Boy and me then smiles. Beast Boy sings a song about Raven then they kiss.

Rachel meets Garfield at Scooters where he sees her playing the Twilight Zone arcade game and approaches Rachel to say "Hi". The two bond over the game as Garfield gives Rachel some helpful tips to get a high scour. He later sees her leaving with two people and over hears them saying something about getting Rachel somewhere safe, which peeks his curiosity as he began to wonder if Chief might be able to help her as well. After hearing about the fiery explosion at the convent she called home. When Rachel runs away from the sisters for what she did in fear, Garfield follows her in his tiger form and after seeing that she is shaken by his appearance he changes back into his human from, while reassuring Rachel that he isn't going to hurt her with his fangs and is going to take her to a safe place. Where there are people like them. One the way Rachel tells him that there is something evil about her, before they come across poachers who shot down a deer and try to save the animal. Seeing how sad she is for the deer they failed to save, Garfield tells Rachel that her companion for the animal indicates that there is nothing evil about her at all, but Rachel had trouble believing his words. As they hardly know one another.

Once they reached Garfield's home, that is filled with people like them, he sneaks her in and shows Rachel his mancave room, with its own "bar" and is filled with vintage items. As Garfield doesn't get out much and isn't allowed to leave the building; but it hasn't stopped him from sneaking out once in a while. When they learned that both of them had lost their mothers, they asked one another who are the people that look after them. Garfield tries to hide Rachel from his unique family, as he knew that Chief and their Robot Man wouldn't be happy with her knowing about their safe sanctuary. After they allowed a hungry Rachel to stay for dinner, Garfield asks Reda to join them. Garfield smiles as he sees Rachel getting along with the Doom Patrol, like they are people.

When Chief got home with a patient that Rachel helps them with, Garfield explains why he brought her home as he wants to help Rachel like Chief had helped him and the others. Even though Chief wasn't happy with Garfield's actions he allows Rachel to stay, before he begins to take a look at her. During the rest of dinner, Rachel learns that Garfield was saved by Chief's formula and how it is the reason why he has powers like her. As Chief examines Rachel and her abilities, Garfield could tell that Rachel is frightened and tries to get Chief to stop before he jects her with one of his serums, but ends up being tranquilized by him. Seeing her new friend hurt by Chief Rachel's rage cause her to attack Chief. Shortly after Dick and Kory came for Rachel and were getting into the car, Rachel turns to face the friend that she is about to leave behind and might not see again, but the Doom Patrol convince Garfield to leave with Rachel so he can live a much freer life with her.

Raven – “And I don't want to reject the positive emotions of my life out of fear of the negative ones. I must learn to take the good with the bad.”
Beast Boy – “It's called being human, Raven. And I think you've worried enough about the bad. How about we focus on the good for a change?”
— Beast Boy and Raven before their final kiss (pre flashpoint) in Teen Titans (2003) #100 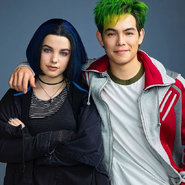