BBStar is the het ship between Beast Boy and Starfire from the Teen Titans fandom.

During the days of the first Teen Titans, Beast Boy first met Starfire when he and his team were on patrol and saw her fighting winged aliens before the Titans saved her from when. After Koriand'r explains what brought her to Earth, once she learned how to speak English, and how she needs to hide from her home planet for a few weeks, Beast Boy and his friends offered her a place in their team of young heroes. In the end Starfire decided to stay on Earth with her friends and because Koriand'r is older then him she acts a bit like a sister or mother towards Garfield. Their time together also got Kory to learn Garfield's back story and how the Teen Titans is both a team and family for people like them can turn to, as well as giving them the opportunity to use their powers for good.

Years later when it was time to start a new Teen Titans team, Kory and Garfield stayed on as two of its original members so they can guide the next generation of young heroes. Mostly Kory as she trains Garfield beside the other young recruits, along with her being pleased to see Garfield trying to bond with their new Robin, Damian who wasn't having trouble bonding with the others until the Titans needed to put their differences aside in order to save Raven and the brain washed Justice League. When Garfield asked Raven questions about her mother having sex with Satan, Kory scold him before telling Beast Boy to focus and let Raven finish her story.

In Teen Titans: The Judas Contract, Kory can see that Garfield has grown close to Terra like she has done with Dick over the years. At the end of the film as Garfield does a radio interview, he doesn't answer any of the host's questions about the new girl on the team since Starfire would kill him if he doesn't keep his lips sealed, and turns himself into a seal as a joke.

When Darkside returned to Earth in Justice League Dark: Apokolips War, Beast Boy was killed alongside the other young heroes while Koriand'r was gravely injured and turned into a cyborg by Darkside to make her serve him, until her allies mange to free Starfire from his control. Even though Earth's remining heroes were able to win in the end, it doesn't change the fact that the state of the world and the memories of the fallen friends made their victory feel like a loss. This got John Constantine to convince Flash to do another Flash Port, in hopes that they can change the out come and possibly prevent Garfield and the others' deaths. What happened after that is unknown.

When Garfield had sneaked out to spend sometime at Scooters, he sees Kory talking to Rachel Roth before they left the building. Because Garfield brought Rachel to the safety of his home after she ran away from the convent, Kory's search for Rachel allowed her and Garfield paths to cross with each other, again. Just as Kory was about to leave with Rachel and Dick, the Doom Patrol convince Garfield to leave with Kory's small group so he could have a much freer life to the one he had been living. Kory allows Garfield to join them before the four drive off.

The next morning, after they arrived at a motel to rest for the night, Garfield and Kory show one another their powers.

It's not as popular as other ships, but it's well-known in DC related fandoms. It's overshadowed by popular ships like BBRae and RobStar. Even though many prefer to keep them as friends than lovers, despite the BBStar-like moment shown in the animated Teen Titans series and DC related franchies. 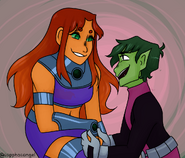 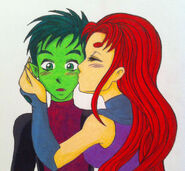