Baking Soda is the slash ship between Kazuichi Soda and Teruteru Hanamura from the Danganronpa fandom.

Teruteru and Kazuichi have almost no interactions in the Danganronpa 2 game. The only thing close to an interaction in Danganronpa 2 is when they spend some time together in one of the Chapter 1 Special Time Events, where they discuss how to slice open a coconut.

However, in Danganronpa 3's Despair Arc, which showcases their time in highschool together, they're shown to be friends with each other. Some of their notable interactions include Episode 6, where they tease Fuyuhiko Kuzuryu together for, despite being one of the most stand-offish students, coming to their homeroom teacher's welcome back party, as well as fantasizing together in Episode 7 about "Ryota" and Mikan's relationship (an example of their shared perverted personality). They also hug each other in fear during riots caused by the reserve course students, as well as appearing together in 2 of Danganronpa 3's ending credit scenes. At one point, Kazuichi gets confused by Teruteru's statement that Nagito Komaeda is within his "strike-zone" after the former complained about having to carry Nagito for so long.

The ship's name is a play on Teruteru's culinary talent as the Ultimate Cook and Kazuichi's last name, which in the English localization is spelled as "Soda" instead of the Japanese "Souda." However, some people in the fandom still refer to Kazuichi as Kazuichi Souda, or simply "Souda", meaning the ship is oftentimes spelled as "Baking Souda".

The ship sailed as a result of both characters being among Danganronpa's most perverted ones. The fact that both boys with a similar personality came from the same cast also helped. As such, after Teruteru's death in Chapter 1, many fans wondered how Chapter 2 would turn out if Teruteru had lived long enough to potentially go with Kazuichi's plan to attend the girls' beach party, like Hajime did.

While Teruteru's ships tend to be unpopular due to his perverted personality and the character himself being rather unpopular, this ship is one of the most popular ones involving him. Nonetheless, it naturally loses in popularity to Kazuichi's main ships, such as Sounia, Soudam, Sonsoudam, or Soul Friends.

The ship is a minor one and as such doesn't get many fan fictions or fan arts dedicated to it. The two are sometimes also paired with the other perverted Danganronpa characters, Hifumi Yamada and Miu Iruma, with Hifuteru and Kazumiu both being more popular than Baking Soda. 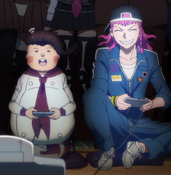