BakuCamie is the het ship between Katsuki Bakugou and Camie Utsushimi from the My Hero Academia fandom.

The two didn’t officially meet until the Remedial Course Arc, after both failed their provisional hero license exam(s). Katsuki failed his exam because of his harsh language toward many of the examiners during the rescue. Camie failed since she was impersonated by Himiko Toga the first time around.

Katsuki and Camie have the opportunity to obtain their provisional hero license through the remedial training course (along with Shoto Todoroki and Inasa Yoarashi who had also failed the exam). As Katsuki and Shoto walk through the hallways at the training facility to get their licenses, they run into Inasa and Camie. Camie calls Katsuki and Shoto handsome and while trying to get Shoto's phone number, Katsuki (despite never interacting with Himiko when she was disguised as her) he recognizes Camie's face and asks Inasa if she wasn't in the provisional hero license exam earlier, to get no for an answer.

After she and Katsuki “introduce” themselves to one another, Camie tells Katsuki that delinquents such as him aren’t in fashion. Once at the training ground, (throughout Yokumiru Mera's introductory speech) Katsuki and Camie can be seen quite close to each other. Later, while the recovery course group (Katsuki, Camie, Shoto, and Inasa) are on a mission to win the hearts of the children, Camie listens carefully to Katsuki's speech about finishing the mission and gets irritated several times when he wants to resort to violence.

So the students decide to fight the children from Masegaki Primary School and during the fight, Camie creates a beautiful illusion of Shoto (Glamouroki/Maboroki) to distract one particular girl. Katsuki finds the illusion amusing, and genuinely laughs at the sight and then excellently imitates the illusion and the words of “Maboroki’s” - “You have such a beautiful face, my dear~” and went back to laughing (possibly becoming the first time Katsuki has been seen to laugh constantly).

The fight(s) soon wrap up after this. Upon leaving the gymnasium in which these events partook, Camie states that Katsuki is rather pretty/pleasant when he’s being quiet while Katsuki yells at him to shut up and keep walking. Their schools, U.A and Shiketsu were never close in the past, as each one wants to prove to be the superior hero school. However, after Camie’s attack (by Himiko), the schools have agreed to team up upon necessary instances, perhaps hinting that a joint training, and possibly another team-up between Camie and Katsuki could happen again in the future.

Later during the Meta Liberation Army Arc, during the final lesson of their remedial course. Shoto, Katsuki, Inasa, Camie, and other students are getting ready for their final lesson. Both Katsuki and Camie are seen standing next to each other.

After a long while, Camie Katsuki finally get to meet again in chapter 9 of the light novel spin-off, “Team Up Missions”. In the chapter, titled “That’s Totally Overdoing the Illusion!”, the group of Katsuki, Eijiro and Shoto had been called to an amusement park (Future World) for a mission. They soon run into Camie, who had been called there as well. The group were there to perform a stage play in hopes to raise the popularity of said amusement park, although things quickly go awry.

Although they haven’t interacted all too heavily, it’s easy to pick out that Camie doesn’t seem to be shaken by Katsuki’s attitude, and isn’t afraid to tell him what she thinks, which is part of the appeal of BakuCamie. Fans of the ship hope to see Camie and Katsuki team up once again, hopefully sooner rather than later.

The ship is somewhat popular in the fandom, although Katsuki has much more popular ships such as KiriBaku and BakuDeku, and to a lesser point, Kacchako.

In the majority of fanworks centering the two, they are usually portrayed as best friends rather than dating due to the amusing dynamic they create. In said works, Camie is commonly seen playfully teasing Katsuki about his brash behavior and pretty face. 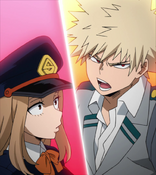 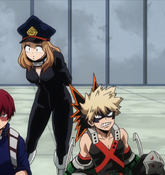 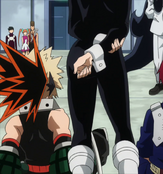 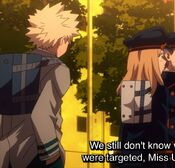 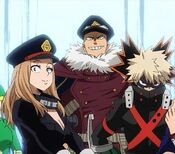 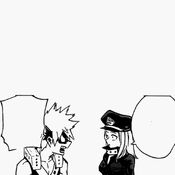 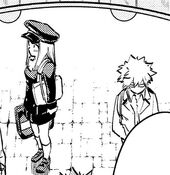 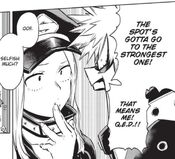 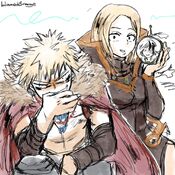 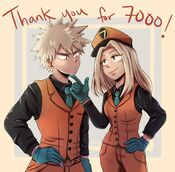 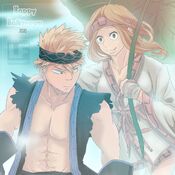 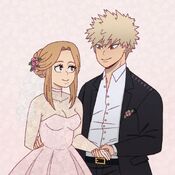 TodoBakuKiriCamie is the ship betweeen the two, Shoto Todoroki and Eijiro Kirishima