BakuKiriMiriTama is the poly ship between Katsuki Bakugou, Eijiro Kirishima, Mirio Togata and Tamaki Amajiki from the My Hero Academia fandom.

Katsuki and Eijiro are close friends and classmates. Eijiro is the only one among her classmates (and his acquaintances in general) that Katsuki sees as an equal, sometimes calling him by his last name rather than a nickname, and even though he doesn't show it very often, he cares about him like when a Villain hit him hard during Two Heroes and helps him study when he asks. While Eijiro, although at first he saw Katsuki as a violent and aggressive person, over time he begins to admire and respect him, as well as being one of the few who can resist Katsuki's explosive personality.

Mirio and Tamaki have been friends since childhood, despite their opposite personalities. Tamaki idolizes Mirio and sees him as a shining and inspiring sun, mentioning his name several times on his debut and wishing he was like him. While Mirio thinks of Tamaki as a person brighter than the sun itself and mentioned that Tamaki inspires him to improve, also giving him his name of Hero Suneater.

Katsuki is the only one of the Class 1-A students who did not see Mirio's incredible abilities due to still being punished for fighting Izuku when Mirio challenged Katsuki's Class to a fight. They interact for a few seconds during the Paranolmal War, since when Katsuki revealed his name from Hero Dynamight to Best Jeanist, Mirio is the only one of the heroes (and villains) present who did not find the name bad and instead, he found it amusing, as he recalled a phrase from his mentor.

Eijiro and Tamaki have a "Senpai and Kōhai" relationship. Tamaki recommended Eijiro to work with him and Fat Gum and they have been working at the same agency ever since. Tamaki has respect for Eijiro and constantly compares his personality to Mirio's. Eijiro also has a lot of respect for Tamaki due to his enormous abilities and was constantly seen with him during his internship, praising Tamaki's abilities several times, protecting and worrying about him.

Eijiro and Mirio have not interacted with each other, but Eijiro is shown to have respect for Mirio after Mirio defeated him and his Class in a fight. During the mission against the Yakuza, Eijiro worried that Mirio would be naked when he went through a wall with his Quirk and at his Class Christmas party, Eijiro asked Aizawa if Mirio was going to celebrate Christmas with them after see Eri.

Although they have not been seen together or speaking in Manga canon, it is known that Eijiro told Tamaki about Katsuki in School Briefs vol.4. During the filler episode of season 5, Tamaki and Katsuki briefly face each other (being their first interaction in the Anime) until Tamaki is scared of Katsuki's angry face and Katsuki takes advantage of this to throw herself at him. Tamaki tries to tell him that he was scared by his face, but Katsuki doesn't hear him and throws an explosion at him.

Similar to how TodoBakuKiriDeku happens, the Ship arose as a result of the combination of two beloved ships (KiriBaku and MiriTama) that are combined and drawn mainly together. The Ship was born mainly due to the closeness of Eijiro and Tamaki during their internships and the similarities of their blonde and energetic best friends, Katsuki and Mirio, which inspire them to improve and move forward. Since Eijiro and Tamaki are shown close to each other, in fan artwork the couples, KiriBaku and MiriTama, are shown hanging out having fun or on double dates.

Some popular fan fiction of the Ship is that both Katsuki and Mirio get jealous of Eijiro and Tamaki's friendship and try to separate them. Others include Tamaki and Eijiro trying to help each other confess or understand their feelings about how they feel with Mirio and Katsuki. 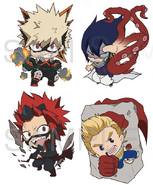 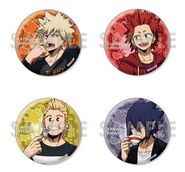 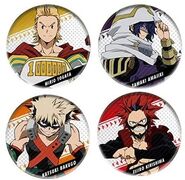