“I'll be careful then, especially since you saved me and even gave me a warning... So, please don't be sad! Although, you are pretty cute when you make that face!”
— Ibuki to Mikan after the latter took care of her in their Friendship Event in Ultimate Talent Development Plan.

Band Aid is the femslash ship between Ibuki Mioda and Mikan Tsumiki from the Danganronpa fandom.

Prior to the Tragedy, Ibuki was one of Mikan’s first- and best friends, which came to be revealed during Monokuma’s second motive, "Twilight Syndrome Murder Case". Ibuki was shown to be one of the only ones in their class in Hope’s Peak (Academy) to be on close enough terms with Mikan to be allowed to address her by her first name, only sharing this ‘rank’ with fellow classmate and friend, Mahiru Koizumi.

Ibuki seems to take an almost sadistic joy in watching Mikan (accidentally) fall into humiliating, and often lewd poses, although she means no ill will in her enjoyment. Always amongst the first to notice- and point out- Mikan’s struggles, Ibuki claims to find these (rather unfortunate) situations of Mikan’s to be cute, often stating that Mikan looks [so] adorable when she’s embarrassed from a fall. Despite her usual entertainment with Mikan’s klutziness, Ibuki occasionally portrays concern for Mikan when she (Mikan) could potentially be harmed, namely when Mikan was shoved and knocked to the ground by Nagito Komaeda in his over-enthusiastic attempt to speak with Makoto Naegi; as Mikan yelps in surprise, and in turn, falls to the ground, Ibuki runs (offscreen) to her to presumably help her up, yelling, “I got you, sweetie!!”

Mikan is very shy, and even more so around/towards Ibuki, whose rambunctious, loud personality contrasts her own, and often leads to a number of interruptions of Mikan’s speech by Ibuki, although, as per usual, Ibuki has no mal intent by doing as she does.

Despite the incidents that occurred from the Despair Disease, which brought Ibuki's supposed murder by a Junko-influenced Mikan, Ibuki proved to still care strongly for Mikan, and continued to treat her as her closest friend as she did before (after awakening from her coma-like state). They’re even seen celebrating together on the ship (away from the KST) alongside Mahiru and Hiyoko Saionji.

During the Killing School Trip, Mikan, infected with the Despair Disease, targets Ibuki as her first victim of murder; Mikan’s killing of Ibuki was for the sake of Junko Enoshima; It was Ibuki who Junko had Mikan kill, as Ibuki is/was the closest person, and a dear friend to Mikan, thus, killing her (Ibuki) would bring/brought Mikan deeper into despair for her ‘beloved’. Mikan has other close friends (ex: Mahiru), so the idea that Ibuki’s death is/was the only one that could inflict such despair upon Mikan allows it to be inferred that the feelings between Mikan and Ibuki may have been something more, at least on Mikan's part.

In New Danganronpa V3's bonus mode, Ultimate Talent Development Plan, Mikan was relieved to see Ibuki awaken. Mikan was surprised when Ibuki stated how she forgot who she was. Mikan was also calm to hear that her friend was okay. Mikan shows concern for Ibuki when she plays all by herself. Ibuki states how she trusted a helpful person like her. In the end, Ibuki complimented Mikan as a cute person when she made a sad face as well.

“Awwwwww! She looks so adorable when she's embarrassed! It's sooooo moe, I'm practically snorting with joy!”
— Ibuki after Mikan fell in an embarrassing pose for the first time in Danganronpa 2.

“Eeeeeeee-hehehehe! I can't take this at all...! Mahiru! It's time to snatch some shots!”
— Ibuki after Mikan fell in an embarrassing pose for the second time in Danganronpa 2.

The two seem to be shipped mostly for their shy, timid girl and energetic, easygoing girl dynamics, being friends with Soapies who are involved in their own ship, and Ibuki enjoying Mikan's embarrassing poses and calling her cute.

Another reason people ship it is because Ibuki is heavily implied to be asexual, and Mikan is implied to have trauma over being sexually abused by bullies in her past.

The nickname for this ship - Band Aid - references the talents of both girls, with "band" referencing Ibuki's talent of the Ultimate Musician, and both "aid" and "band aid" referencing Mikan's talent of the Ultimate Nurse. It's the most popular shipping choice for both characters included, however it still has its rival ships. It's main rival ships are Hinamiki, Komamiki, and Twobuki. 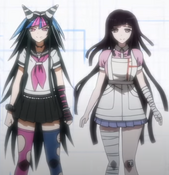 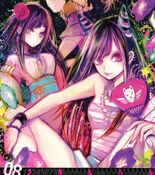 Page from the Danganronpa 1.2 2015 anthology calendar 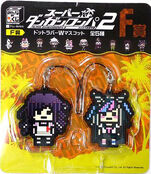 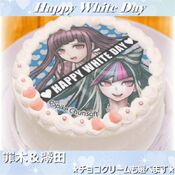 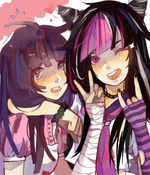 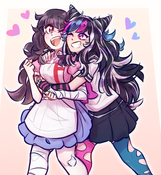 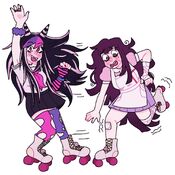 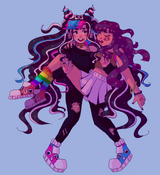 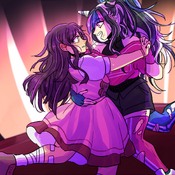 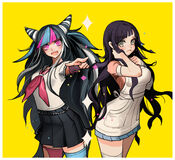 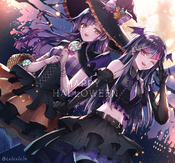