Barbelle is the femslash ship between Barbara Pegg and Noelle from the Genshin Impact fandom.

Noelle and Barbara don't have any interaction in-game although it's confirmed that they know each other and are very good friends. They're known to be famous in in their city. Noelle is known for her hard-working personality as a maid-in-traning in the Knights of Favonius while Barbara is known for being the self-proclaimed "Idol" of Mondstadt .

In regards with their personalities, they seem to be very similar to one another. Both seem to take their duties seriously, especially when it comes to finishing certain tasks. In Noelle's Hangout Events with the Traveler, it's shown that she really can't say "no" when someone needs her help. Similarly, Barbara always wants to make everyone idolize her, because she thinks that's the duty of an idol. Both also admire Jean, Barbara's sister, as Noelle's big idol to become a knight is Jean and Barbara acknowledging that Jean is perfect, unlike herself.

Furthermore, in terms of gameplay, both are known to be elemental users. Noelle's vision is Geo while Barbara's vision is Hydro. They also have the ability to heal their companions when hitting certain mobs. Noelle also uses a claymore as her weapon while Barbara uses a catalyst in battle.

Both, Noelle and Barbara have a voiceline about each other: In Barbara's voiceline about Noelle she compliments her as "the cutest". She further says that Noelle is so kind and patient and you can feel so relaxed around her. Barbara also compliments Noelle's cooking as "delicious", and that the best part about Noelle's cooking is that her creations are also healthy and not just tasty.

“We take tea breaks together sometimes. Often she'll start humming a tune, saying inspiration has come to her. I'm not the right person to give useful feedback on anything musical... But I still love spending time with Barbara.”
— Noelle's Voiceline about Barbara

“Noelle is just the cutest! She's so kind and patient, you just feel totally relaxed when you're around her. ...Oh yeah, and she makes the tastiest snacks! Best part is, they're also healthy. Tee-hee!”
— Barbara's Voiceline about Noelle

Barbelle isn't really a well known ship within the Genshin Impact fandom, although it can't be considered a rare-pair either. The ship sailed, because of Barbara's voiceline about Noelle, where she compliments her as cute. Others might also enjoy the ship, because Noelle and Barbara have some similarities. Furthermore, some also like the ship because Barbara and Noelle appear to be around the same age old, as both look like highschool girls (around 16 years old). So there aren't any problems age-wise.

The ship currently has 82 stories on AO3 (romantic) and 13 stories on the gen side. 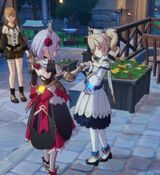 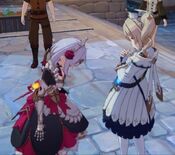 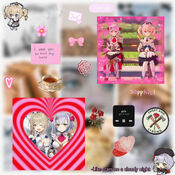