Barbie x Raquelle is the femslash ship between Barbie and Raquelle from the Barbie fandom.

Barbie and Raquelle are ex-best-friends who are now on bad terms. At the beginning of the movie, Barbie is at the première of her latest movie when Raquelle, who is also her co-star, steps on her dress, ripping it. The next day at Wally's restaurant, Raquelle approaches the table where Barbie and her friends are eating and starts annoying her. So Barbie decides to follow her, to confront Raquelle. While the two are arguing, Princess Graciella, Crystal, and Graciella's assistants show up and kidnap Ken. Carrie and Taylor sprout their wings and attempt to stop the Princess from taking Ken, but the portal to Gloss Angeles closes before they can enter it. The stylists attempt to dissuade Raquelle and Barbie of the fact that they just saw fairies, but admit their existence. That's when the two of them start working together to save their friend back.

The four of them travel to Paris, transporting themselves to the top of the Eiffel Tower. Raquelle and Barbie keep having banters with one another. But Carrie and Taylor stop this when they ask the two of them to grab them by the hand, flying through the city. As they fly above buildings and even a lake, Raquelle and Barbie keep stealing glances and smiling at one another.

Once they arrive at Lilliana Roxelle's house, where the portal that can transport them to Gloss Angeles is, Lilliana reveals that Graciella must be under a love potion, which adds red to the eyes. She gets a vial of antidote for the love potion and gives it to Barbie. Raquelle, enthusiastic to go out, starts moving, forgetting they were on a floating table. So she almost falls, but Barbie catches her on time. Lilliana notes this and tells the two of them that they seem to work well together, which surprises the two of them. In that moment, the two of them give each other shy, embarrassed looks, and quickly release the hold they had on one another's hand.

They are transported to Gloss Angeles and their relationship keeps growing the more adventures they have together. For example, when Raquelle was very insecure seeing Barbie was praised by everyone because she could do anything, once the four of them continue flying up to the palace, and come across some pegaponies, colored, flying horses that fly them the rest of the way, Barbie makes sure to praise Raquelle too. When they near the palace, the group encounters several swirlnadoes, tornadoes that will make even the best flyer lose their balance. Barbie points out that Raquelle can do it since she's skilled with horses, to the latter's surprise. Raquelle is deeply surprised by the fact Barbie remembers all these details about her, like the fact she was great at riding horses in a summer camp they went to in 10th grade. When Raquelle starts doubting she might not be able to pass through the tornados, Barbie reassures her once again that if she leads, Barbie will follow, which gives Raquelle the power she needs to do it.

Once inside the palace, the four locate Princess Graciella and plan to stop her. But she's quicker and sends the four of them to the dungeon by trapping them in Fury Spheres which are said to be escape proof. With Raquelle and Barbie together in one of them. Inside it, Barbie is starting to get discouraged by how hopeless their situation seems, but Raquelle sits down beside her and starts comforting her. She tells Barbie that being with her in the cell makes it all better, to which Barbie agrees, since she likes being by Raquelle's side too. After that, the both of them start to open up more and apologize to each other. Raquelle reveals that she always wanted to get closer to Barbie, but felt shy to do so. Barbie tells her that she felt that way too, that she really wanted to be close to Raquelle but that she thought Raquelle didn't like her. The two of them apologize to each other and as they hug, the escape-proof sphere starts disappearing, giving the both of them a set of new powerful wings, instead. Revealing that their rekindled love and their forgiveness was the one thing that set them free.

Barbie x Raquelle is not such a popular ship within the Barbie fandom. Although it is the most popular one of the movie it is from, "Barbie: A Fairy Secret". Many fans of the ship associate the trope "enemies to lovers" with the ship. And Raquelle and Barbie's love being the thing that literally freed them from the place they were captured in, made many fans love this ship. Fans' headcanons about the couple always involve the two developing their relationship further and starting a romantic relationship after their makeup.

Many fans have notices that in most Barbie movies Barbie is very often transforming into dresses, wings, mermaid tales, etc. in the lesbian-flag colors, while her female character companions usually change into either blue, or purple, or exactly the same colors as the bisexual flag colors. And this movie's case, Barbie transforms and gets a pair of wings with the exact same colors as the pansexual flag, although it's also a rainbow from up close. And in Raquelle's wings, the colors of the bisexual flag are clearly visible. Something many fans of the franchise noticed and appreciated.

Alexa/Liana (Barbie and the Diamond Castle) tag on AO3 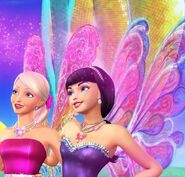