King Constantine – “Why are you defendng her? You are a champion - she's not your equal!”
Sal-Lee, standing up for Barbie – “No, she's not. She's better. Barbie is a leader. She has heart.”

Barbie x Sal-Lee is the femslash ship between Barbie and Sal-Lee from the Barbie fandom.

Barbie and Sal-Lee meet each other during an intergalactic mission to restore the stars. The first time they meet is during a ballroom held in the kingdom. Sal-Lee is presented as a gold-medalist, and as she gets named, she steps ahead. Then, she does incredible tricks on her hover board as people cheer for her. Barbie watches her in awe, saying she's amazing.

Later, when the banquet is held, Barbie stares at Sal-Lee from afar, and gets all shy when she thinks Sal-Lee is staring back. So she hides under some flower decorations, only to get surprised by Sal-Lee, saying hi to her. They introduce each other and Barbie gets extremely nervous and shy around her, so she ends up messing her introduction up. They get interrupted by other fans of Sal-Lee, and she impresses Barbie once again with her incredibly high speed. Prince Leo approaches them while they're talking and asks Barbie some personal question that might be sensitive, so Sal-Lee immediately jumps to defend her. However, during the dinner, she makes some sarcastic jokes to Barbie, but Barbie is only delighted by them.

The next day, Barbie goes for training and meets Sal-Lee. She tries to get closer to her, but Sal-Lee tells her that she usually trains alone. Barbie tells her she understands and opens up about her experiences back home. So Sal-Lee tells her that it's okay if she wants to join her. And they spend the rest of the night, training, laughing and they open up about their dreams, as they stare at the stars. In the morning, Barbie and Sal-Lee participate in the first part of the training tests defense reflexes, where they have to complete the race on the hoverboard. When both girls were near the finish line, Sal-Lee was about to hit a wall, hurting herself, so Barbie saves her right on time, grabbing her and successfully keeping her safe. However, this costs her to lose, as Sal-Lee is thrown to the finish line. As she gets up and recovers, she smiles softly at Barbie and compliments her awesome skills. Later, when the sun is setting, Barbie is sitting with her pet Pupcorn, and Sal-Lee approaches her once again, shyly thanking her for what she did during training, saving her. As she was starting to blush, Sal-Lee quickly says goodbye to Barbie and runs away.

On their first mission to another planet, King Constantine sends Barbie, Sal-Lee, Sheena and Kareena, and Leo to search for a Starlian. But Barbie ends up freeing the Starlian, thinking that the King wants to keep it in his zoo where it wouldn't be able to survive. Because of this, the King dismisses Barbie from the team and informs the team that they need the Starlian because they need it to protect them from magnetic storms on their way to the center of the galaxy. Barbie is left so sad, that she considers leaving. However, that night Sal-Lee goes to meet the King to convince him to not dismiss Barbie, as Sal-Lee says that Barbie is a leader who has heart. At that moment, Barbie appears, smiling at Sal-Lee and shows the King the Starlian she captured. The King reluctantly reconsiders his decision and lets Barbie back on the team. Sal-Lee and Barbie immediately celebrate together. And finally, Sal-Lee confronts the King and tells him that Barbie would be their team leader from now on.

That same night, the whole team sits around a fire, nervous about Mission Day, so Barbie sings the song that her mother always sang to her when she was afraid, and soon her friends joined her. As she sings, Sal-Lee and her exchange looks and soft smiles with each other.

Barbie ends up saving the Galaxy, and is declared Princess Starlight. She and Sal-Lee arrive together at the party held in celebration of her achievements and they dance together alongside their team for the rest of the night.

Barbie x Sal-Lee is part of the popular ships in the Barbie fandom. Specially among younger fans and fans of the "newest" Barbie movies. This ship made many people think that Barbie would finally get a girlfriend in one of the movies upon first watching, mostly because of the amount of romantic tropes used between them throughout the movie, such as getting nervous and shy upon first meeting each other, star-gazing and going on dates, standing up for each other, etc. Many fans also love the trope subversion of "Enemies to Lovers" or "Rivals to Lovers" between the two, since although they start off not knowing each other so well, and purposely pitted against by King Constantine, the two of them only get closer to each other and work to lift each other up. This pair is often referred to as "Space Girlfriends" because the movie is set in outer space, and it's the first Barbie movie of this kind.

Barbie introduces herself to Sal-Lee

Barbie and Sal-Lee dancing together

Barbie and Sal-Lee star-gazing together

Barbie and Sal-Lee training together 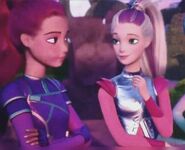 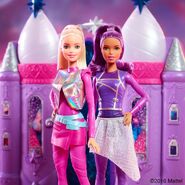