• Birds of a Feather - Both characters are known for their love to music.
• Opposites Attract - Xinyan is cheerful and energetic, while Barbara is more reserved and quiet.

Barbnyan is the femslash ship between Barbara Pegg and Xinyan from the Genshin Impact fandom.

Barbara and Xinyan have never canonically interacted in the current story, and don't seem to know each other, since they never mentioned each other, nor have voicelines about each other.

MiHoYo has posted an artwork [1] of the two, to celebrate one million followers on Genshin Impact Weibo, where the two are singing together.

Barbnyan is a rare-pair within the Genshin Impact fandom, as the two have never canonically interacted. The ship got mostly some attention because of the artwork that miHoYo posted of the two. It helped that Xinyan and Barbara both like musics, which lead to some headcanons that Barbara and Xinyan would sing a duet or give a concert together. The image that miHoYo posted, fueled these headcanons further. These headcanons, lead to most of the fan arts that got created for the two, such as this two fan art's.[2][3] The ship also got some popularity because of a fan art[4] from lavelis, that was uploaded on Twitter. The fan art got almost 100,000 likes and so gave the ship a little bit more popularity.

Barbnyan is among the most popular ships for both, Xinyan and Barbara, but still has it's rival ship's, such as, Xiangyan, Barbelle and Barbennett. Some fans like to theorize, that if Barbara and Xinyan would meet each other, the two would become best friends or music partners, because of their similarities and as well their differences. The ship currently has 58 fanfictions as femslash ship and 16 as gen ship, on AO3. The two also have a great anmount of fan arts together. Many like to call them "Music Lovers", because of their love to music. Some Genshin Impact fans wish that the two would make a collaboration. 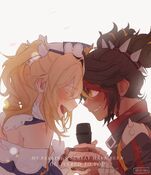