Bee Duo is the friendship between Tubbo and Ranboo from the Dream SMP fandom.

Tubbo and Ranboo are close friends and are both on the Dream SMP server. They're also both a part of the Bench Trio and friends with TommyInnit. The two have watched The Office together. The duo has met up in real life multiple times before and temporarily moved in together. Tubbo once let Ranboo use his Minecraft account to play on the Minecraft Championship practice server. Ranboo later became a player of Minecraft Championship.

Tubbo and Ranboo's Dream SMP characters have some physical similarities. Ranboo is depicted with horns in fan art and even official art such as Tales from the SMP artwork, though his horns have not been mentioned yet. On the other hand, Tubbo's character is confirmed to have horns. Both of the characters also have scars. Ranboo's character has scars from crying since water hurts endermen while Tubbo has burn scars from his execution during the Manberg Festival.

During the construction of Snowchester, Ranboo and Tubbo became closer and their friendship grew. They got married for tax benefits, but fell in love and decided to not divorce. The duo found a baby zombie piglin during Ranboo's original tour of the server. They later adopted him. Together, the two made the Bee n' Boo hotel, which is the origin of one of their ship names, Bee n' Boo.

Tubbo and Ranboo adopted MICHAEL, a baby zombie piglin, on the Dream SMP server. Ranboo is protective of MICHAEL, claiming to kill TommyInnit if Tommy hurt MICHAEL as well as planning to get MICHAEL netherite armor.

Bee Duo is a highly popular duo within the Dream SMP fandom. It's also popular along with Clingy Duo and Allium Duo, making Bench Trio also very popular. Many appreciate the dynamic that Tubbo and Ranboo have together. Many dislike it as a slash ship due to Tubbo and Ranboo both being real people and Tubbo currently being a minor. Others find shipping Ranboo and Tubbo's Dream SMP characters fine due to the stating that they fell in love after they got married.

Bee Duo was disliked at first because of Tommy's hatred of Ranboo. Since Ranboo and Tubbo got married during Tommy's Dream SMP death, many viewed the marriage as Ranboo "replacing Tommy" and "stealing Tubbo." However, this slowly stopped as Tommy started to become friends with Ranboo.

On Twitter, people are apart of "beetwt," a subtwt in which people are interested in the Bee Duo. Fans create academies with houses and uniforms for some subtwts. An academy has been created for beetwt, using the hashtag, #beetwtacademy. The Tumblr counterpart is called "beeblr." 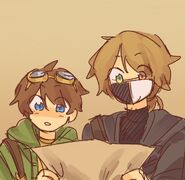 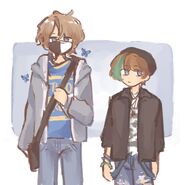 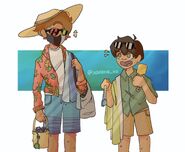 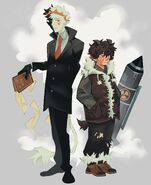